A Day At Hogle Zoo 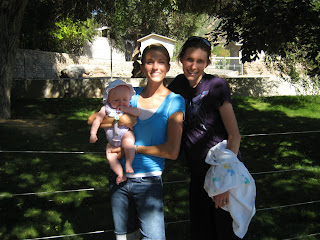 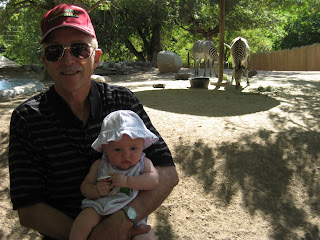 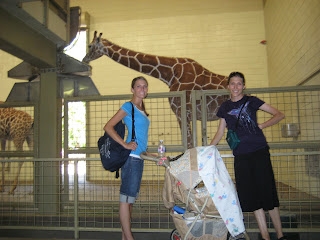 My sister Sharalee, my dad and I spent an afternoon at the Hogle Zoo in Salt Lake City, Utah. I think Aria enjoyed looking at her hands and other little kids more than the animals, but we had fun nonetheless.
Posted by Dane & Tara at 11:59 AM 1 comment: 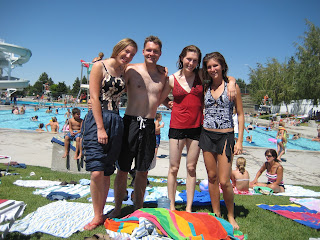 Would you believe that I'm back in Utah again? Dane says I still have my umbilical cord attached. Perhaps it's somewhat true, but I really do have a couple good reasons for visiting again, besides the fact that my family is awesome and we always do tons of fun stuff. Firstly, we had a family reunion last weekend with the Debenham side. On Friday evening we had a luau at my parent's house and on Saturday we got together for pizza, went miniature golfing in the afternoon, and then had a barbeque in the evening. This coming Friday is also the wedding for one of my favorite cousins- Ray Willardson. We grew up together and I'm so excited to see him get married.

The first picture above is my cousin Ray, his sister Kristi, my sister Shannon and I at the local pool this past Tuesday. The second picture is of all the adult family at the luau.
Posted by Dane & Tara at 3:59 PM 1 comment: 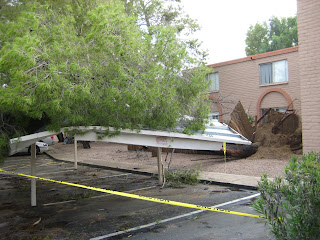 In August, the weather in Arizona is quite eventful. It will be a blistfully blue-sky day, then black clouds will blow in from nowhere. Suddenly, you look out your window and waterfalls are pouring from the skies, the streets are flooded and the once dry riverbed is flowing with water. Such was the night when our bishop came to visit our apartment. I was trying to nurse a screaming baby as the thunder boomed outside, then came the surprise..."We'd like to call you to be the Young Women's president." I raised my eyebrows in surprise and then....boom!....all the lights in the apartment went out and Dane, Aria, the bishop and I were left in the pitch black. I was wondering if this was some kind of sign from God that maybe the bishop had made a mistake. Dane went to look for a flashlight and was in the midst of lighting candles when all the lights came back on. We resumed our discussion of the calling and then all the lights went out again. This continued a few more times as we discussed what this new calling would entail. It was quite the eventful night! The calling is definitely a surprise, especially considering we've only been in the ward 2 weeks; nonetheless, I'm excited and looking forward to it. This will give me the opportunity to still be involved with young people, even though I'm no longer teaching.

The picture above shows a tree that blew down right next to our apartment and smashed the carport.
Posted by Dane & Tara at 5:04 PM No comments: 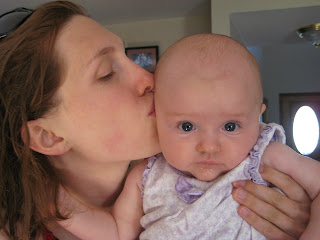 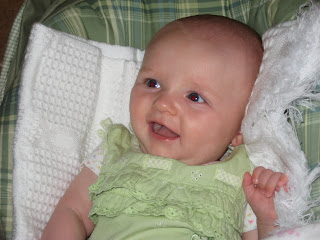 Aria went in for her 4 month checkup last week. She is at the 50-75% for weight, weighing in at 14.22 lbs, the 75-90% for length, at 25.5 inches, and at the 75-90% for head size, at 16.5 inches. She is getting much better at holding her own head up, although continues to detest tummy time. A fun recent development is a new "g-g-g-goo" sound that she loves to make. She is really discovering her hands, and loves to constantly put them in her mouth. I love to take Aria grocery shopping with me because I strap her in my front carrier and talk to her about all the various foods, and then people tell me how adorable my baby "boy" is and I smile politely and don't correct them, even though she's usually wearing pink.
Posted by Dane & Tara at 4:51 PM No comments: 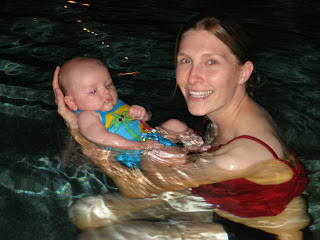 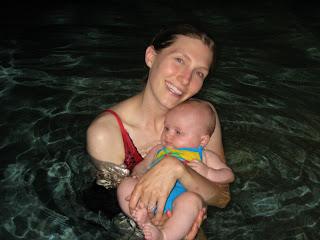 Sorry I haven't updated recently, but we just barely got the internet on Monday and I've been so busy trying to unpack this apartment! Every square inch was covered in boxes, so much so that you could barely move! The first night we were so tired after moving everything in that all we wanted to unpack was our tooth brushes and toilet paper.

Dane has started full force into his classes. He says they definitely call it "boot camp" for a reason. He says he wants to ask questions in the classes, but his questions would sound something like "ummmm...what?" After he comes home in the evenings, around 5:00PM, he has to spend the rest of the evening studying....making him not a very fun person to hang out with. As I have yet to make friends, I try to find fun things to do with Aria between unpacking. One thing we've started doing that's lots of fun is swimming! We have a swimming pool right outside our door and Aria enjoys the water.

A warning about Tuscon, for those planning to move here.... there are a lot of ants on the sidewalks. I mean, everywhere you look there's ants! I was walking outside one day with Aria and I felt something itchy on my feet and legs, I looked down and there were probably 50 tiny ants crawling all over me! I kicked off my shoes and went screaming into the grass. Right now I count between 15-20 bites on each of my feet and ankles! I'm pretty sure they're from ants. Still, I don't want to trade in my sandles for tennis shoes, even if it means having tiny welts and itching feet.
Posted by Dane & Tara at 1:42 PM 2 comments: 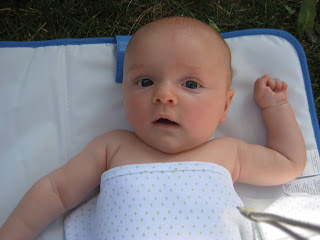 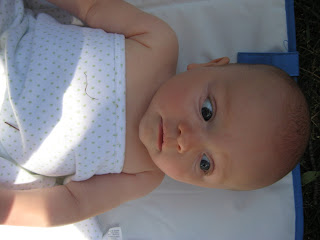 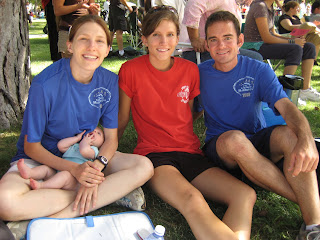 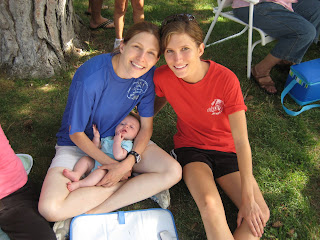 My sister Shannon and I have the yearly tradition of running the 24th of July 10k. This year I had to get up at 4:00 AM in order to feed Aria before the race began at 6:00 A.M. Unfortnately, we had an incredibly difficult time finding parking at the race start. Finally we found a spot, and took off running to the race start, hoping that we wouldn't be too late. Ironically, we were running up the hill to the start of the race at the same time as the thousands of racers were racing down the hill because the race had already begun. I think we had to run a mile uphill just to get to the start of the race! By the time we arrived at the starting line, there wasn't another racer in sight! Even the slowest of the slow had already rounded the furthest corner! I suppose we could have just given up there, but no, not after we'd already paid 30 bucks each to run this dang thing! We took off! I made it my goal to pass as many people as possible, which in and of itself is quite an adrenaline rush and confidence booster. I took great pride in each person I passed, even if they were old or severly overweight. 59, 60....100....250...each person passed increased my motivation to run faster. In the end I counted about 350 people that I passed, even though we started the race 15-20 minutes after the gun was shot! It was a fun race, even if it started out in a frenzy! Afterwards my mom and dad brought Aria and met up with us and we watched the parade.
Posted by Dane & Tara at 1:22 PM No comments:

Dane, the moving truck and the missing cat... 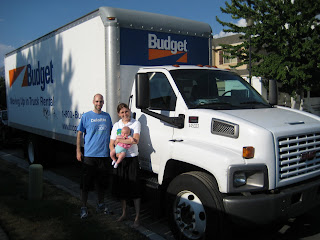 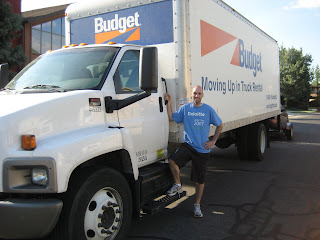 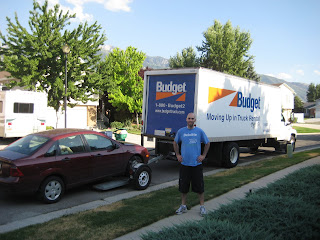 Dane made it to Tucson, Arizona, but it sure was a long and difficult haul. He said that the truck's steering alignment was off and that he had to keep the steering wheel slightly tilted to the right just to keep the thing centered, not to mention the fact that the truck seemed to have no shocks and every bump jolted the entire vehicle. He stopped in Salt Lake to give some furniture away and add other furniture and to say "hello" to his wife and baby and then back on the road he went.

Dane would have taken off early Tuesday morning of July 22nd, but unfortunately, he realized that both cats were missing the evening of the 21st. It appeared as though they had escaped during the chaos of the moving. Now some insensitive folks might have just left the poor felines, but not Dane! Those cats are family! Dane searched mightily that evening, but to no avail. Luckily, later that evening Azure wandered back in, but still there was no Mira to be seen. Dane slept downstairs with the sliding glass door slightly open, hoping that she would return, but when the morning came, she was still missing. We were quite puzzled because it wasn't like our timid Mira to take off on her own like this. My mom suggested Dane check the truck again and Dane felt like this was a good idea even though he'd already done so earlier. Much to our elation and suprise, as he called out her name, he heard a little chirp coming from the back of the truck. Mira was hidding in the box spring mattress! Apparently she had sought out refuge in the box spring during the commotion of the move, and there she had crouched while the mattress was lifted out of the second story balcony window and lowered to the moving truck below, without making a sound, and there she remained for 24 hours! Thank goodness we found her before taking off!

Overall Dane said that the cats were good travel companions, amazingly able to hold all litter box urges for up to 12 hours! They cried periodic protests at being locked in cages all day long, but other than that, they took to sleeping the long hours away. Dane says he never wants to drive a moving truck again! Maybe next time we'll pay the extra money and go with that POD company that moves the stuff for you.
Posted by Dane & Tara at 12:53 PM No comments: 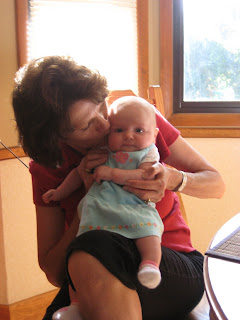 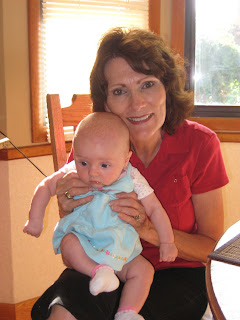