For Valentines this year the kids made their own valentine butterflies to share with their classmates.  They had a great time decorating each one. 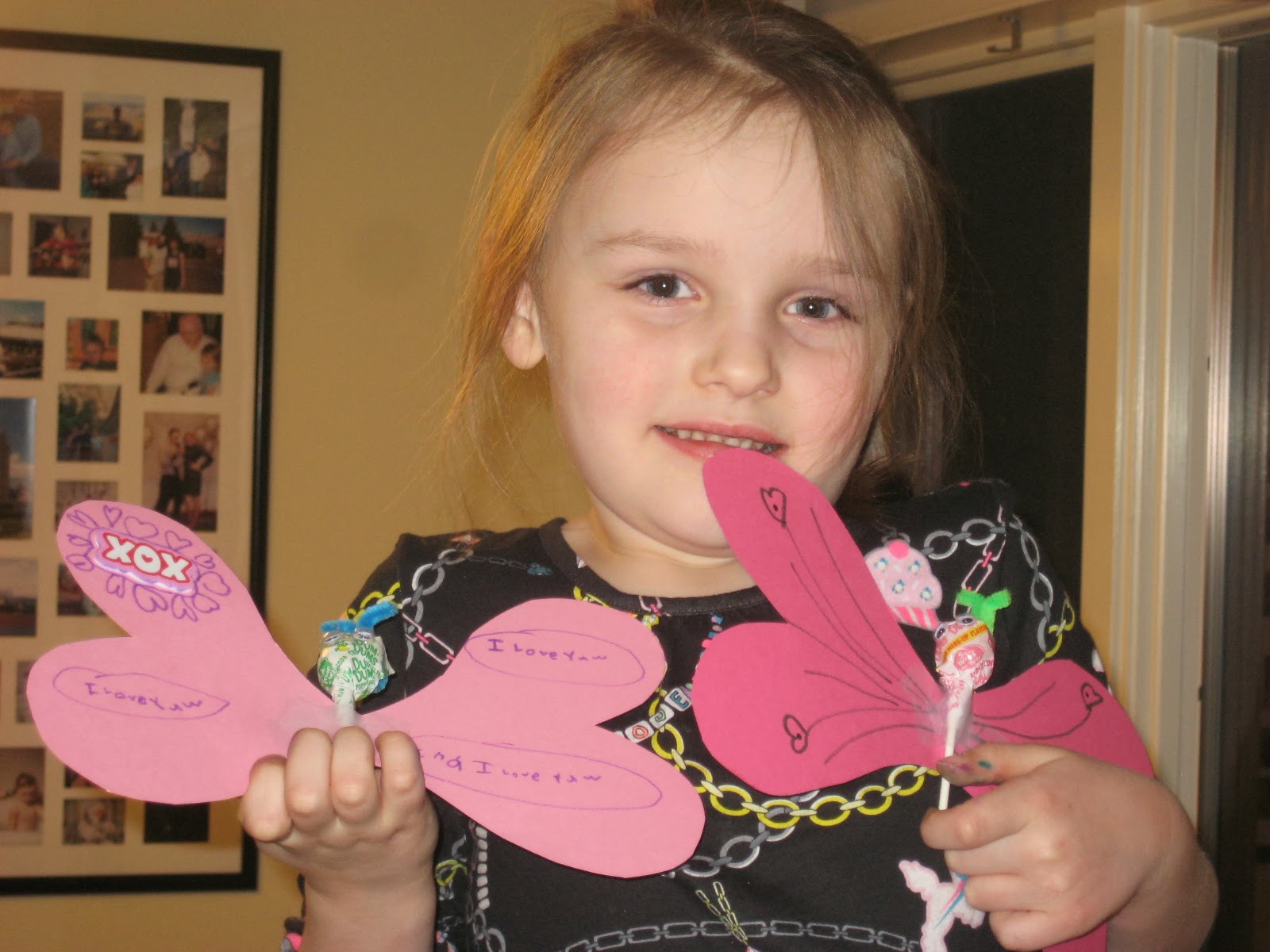 And then for dinner they made heart shaped pancakes. 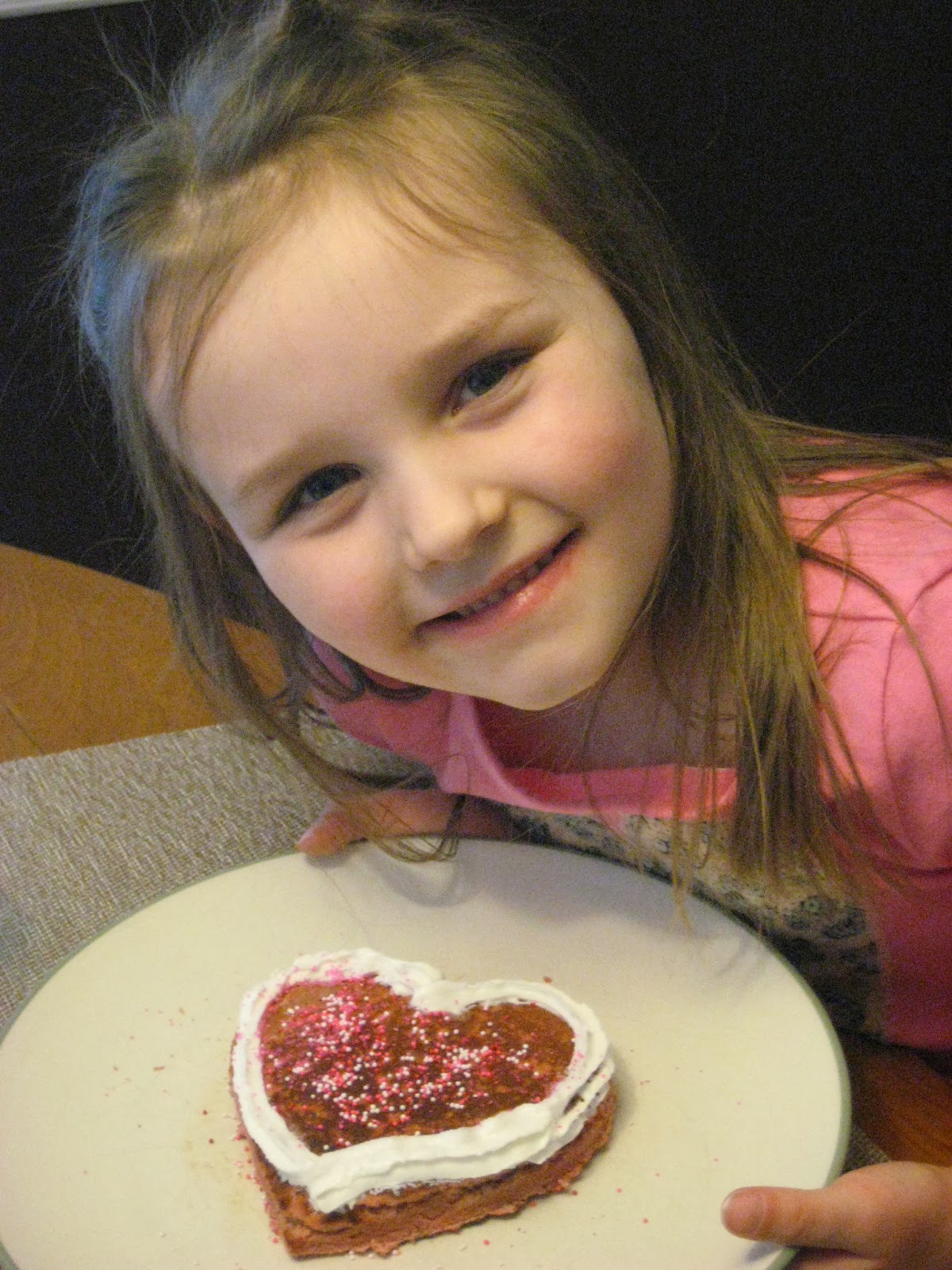 This week a ton of snow fell.  We probably got over a foot and half.  The temperatures have finally started to warm up into the upper 20's so that it's been nice enough to go out and play in.  So with the help of our neighbor Greg, we built a mound at the top of the hill in our front yard and made a nice sledding track that the kids really enjoyed zipping down. 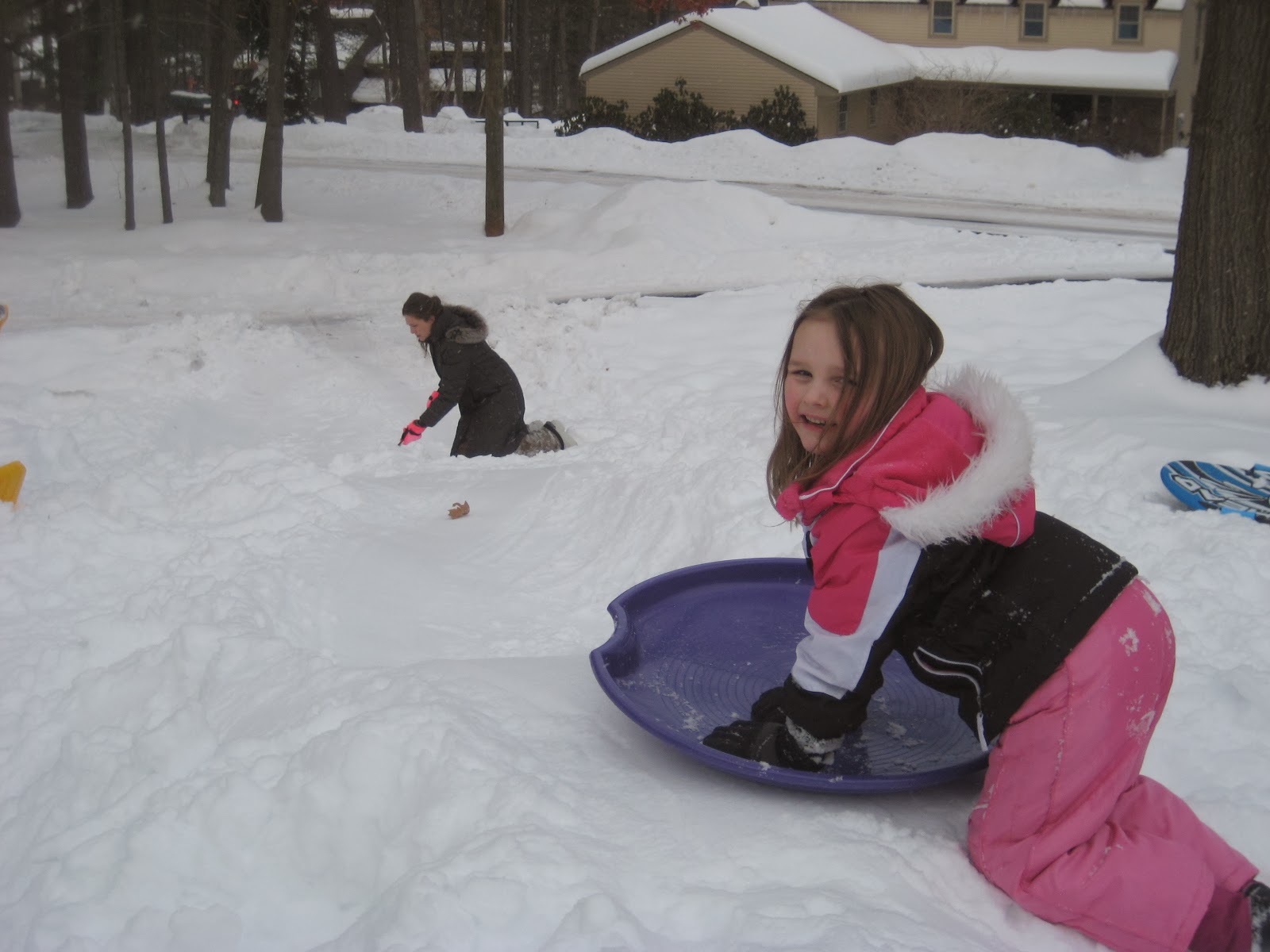 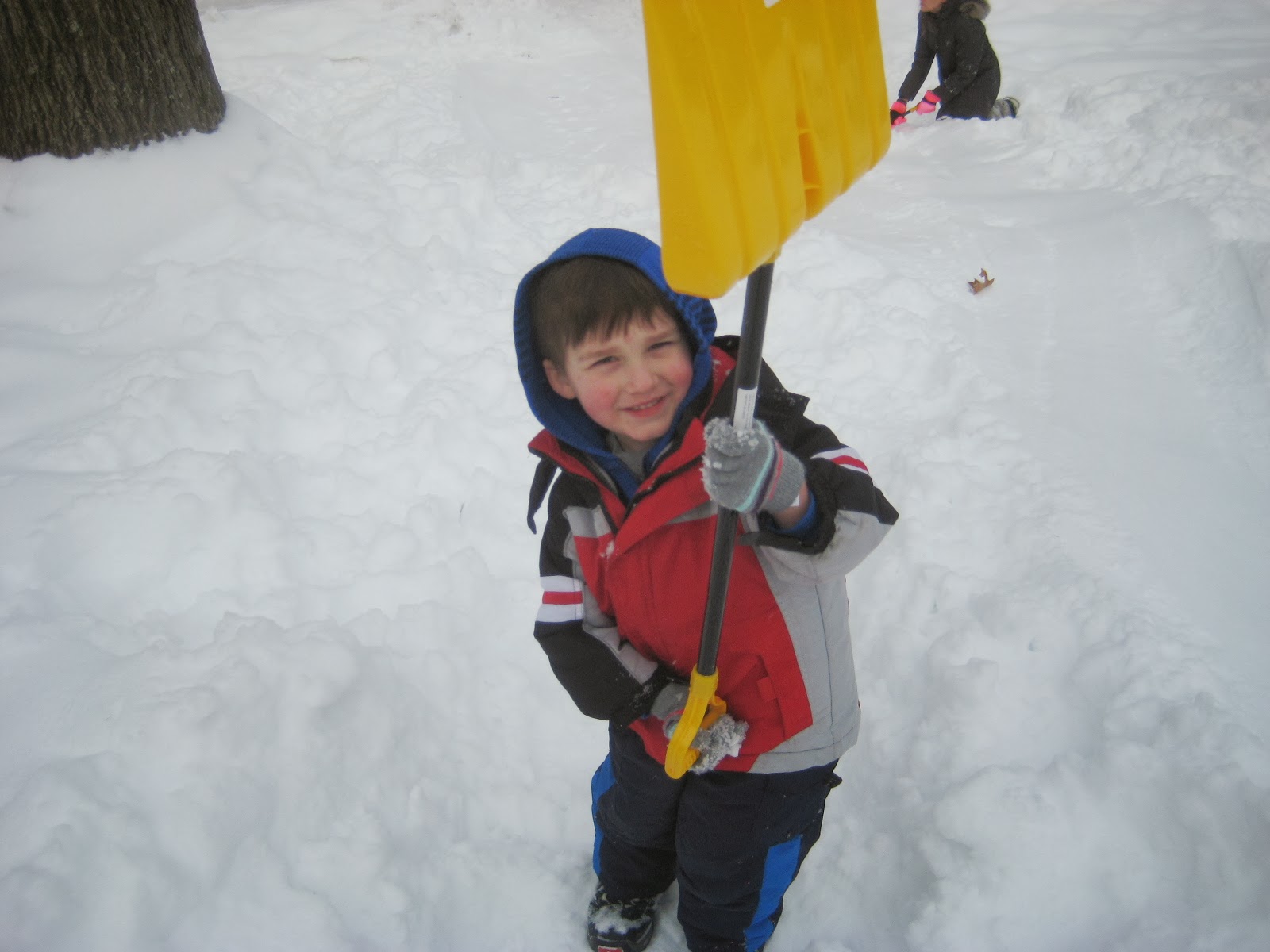 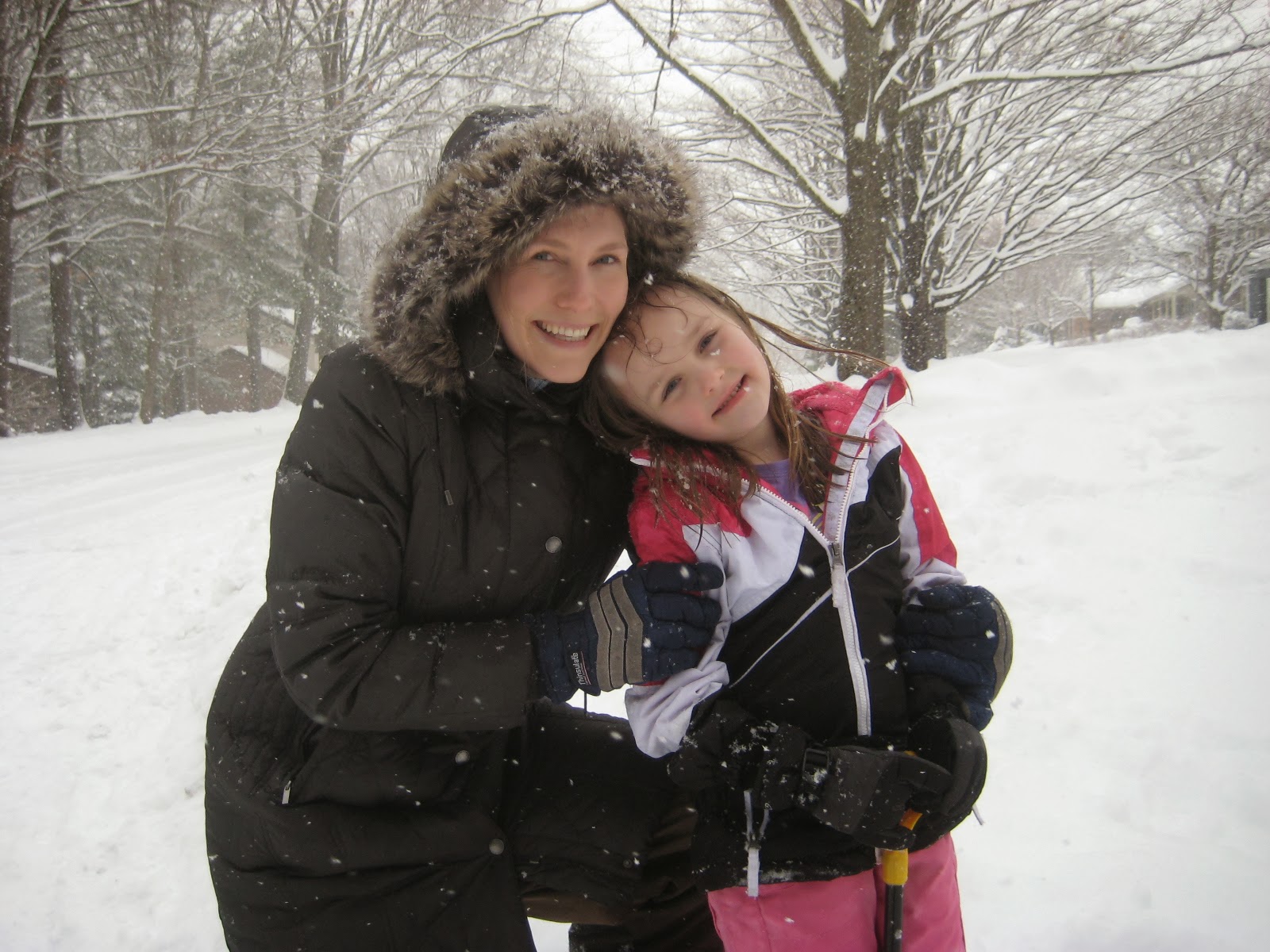 Here we are standing in our front yard with our driveway behind us.  You can start to see how the snow is now piled up pretty high on the sides of it. 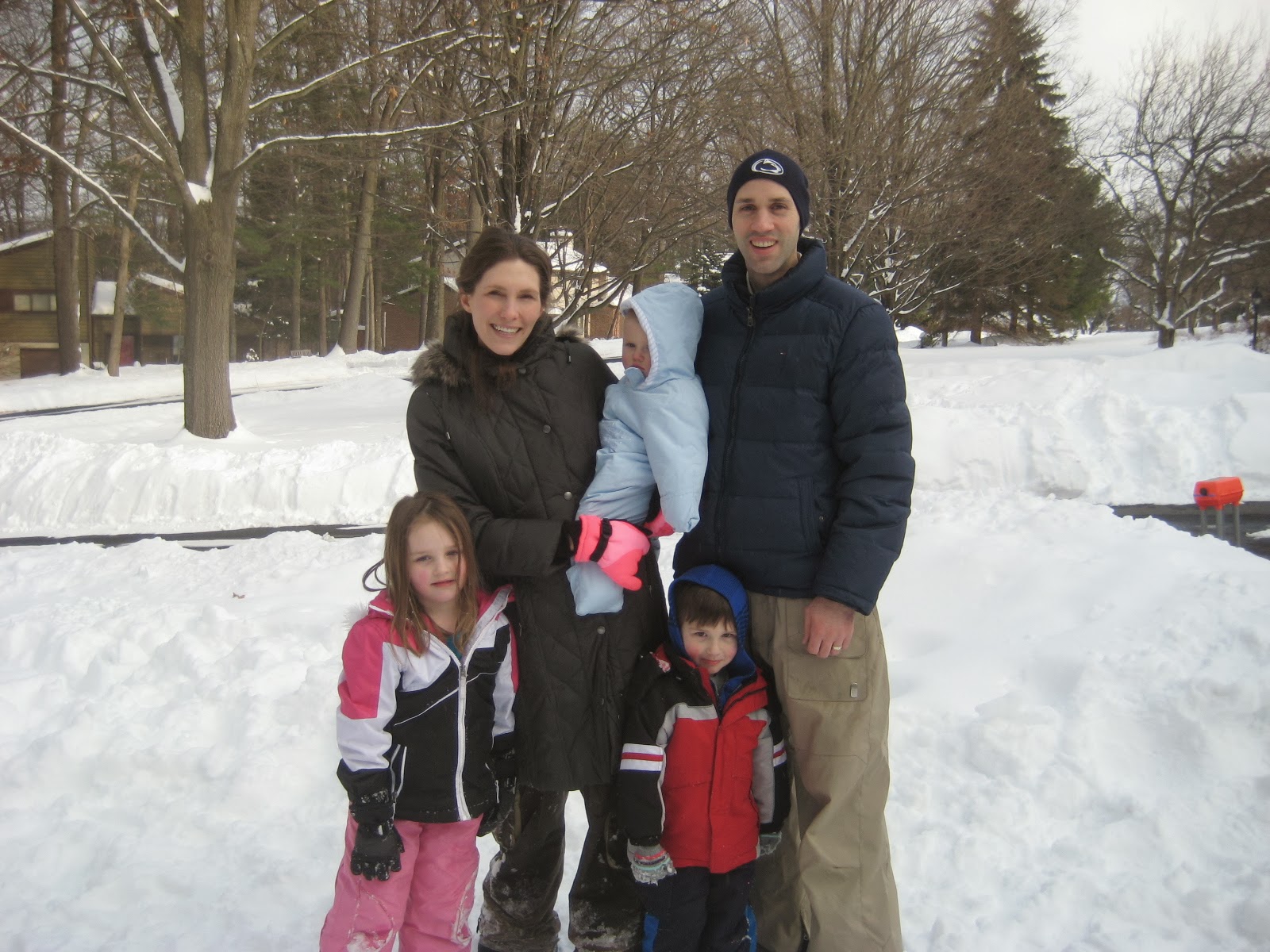 That said, I feel fortunate my back hasn't gone out yet with all the shoveling I've been doing to clear our driveway.  Everyone tells me this is an abnormally high amount of snow we're getting this year, which is the main thing keeping me from going out and buying a snow blower.
A few days ago when 10 inches dropped, I had no desire to go out and clear the driveway.  Tara however hasn't done any of the shoveling and really wanted to go outside, so she volunteered.  Fortunately for us, a man with a big snow plow attached to his truck saw her out shoveling and voluntarily cleared most of our driveway in just a couple minutes.  We were so grateful!  He saved us well over an hour of shoveling.  It was quite a blessing. 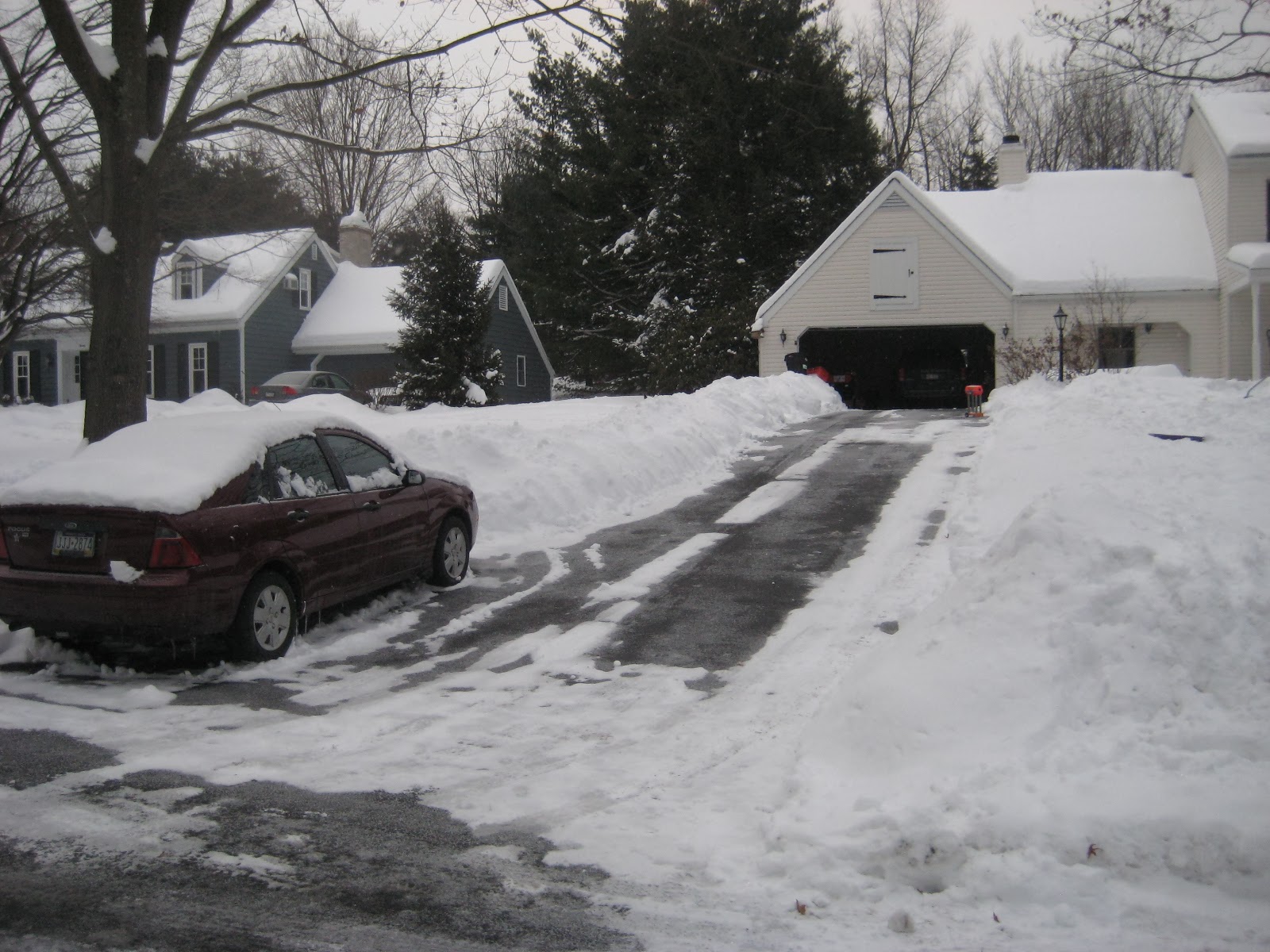 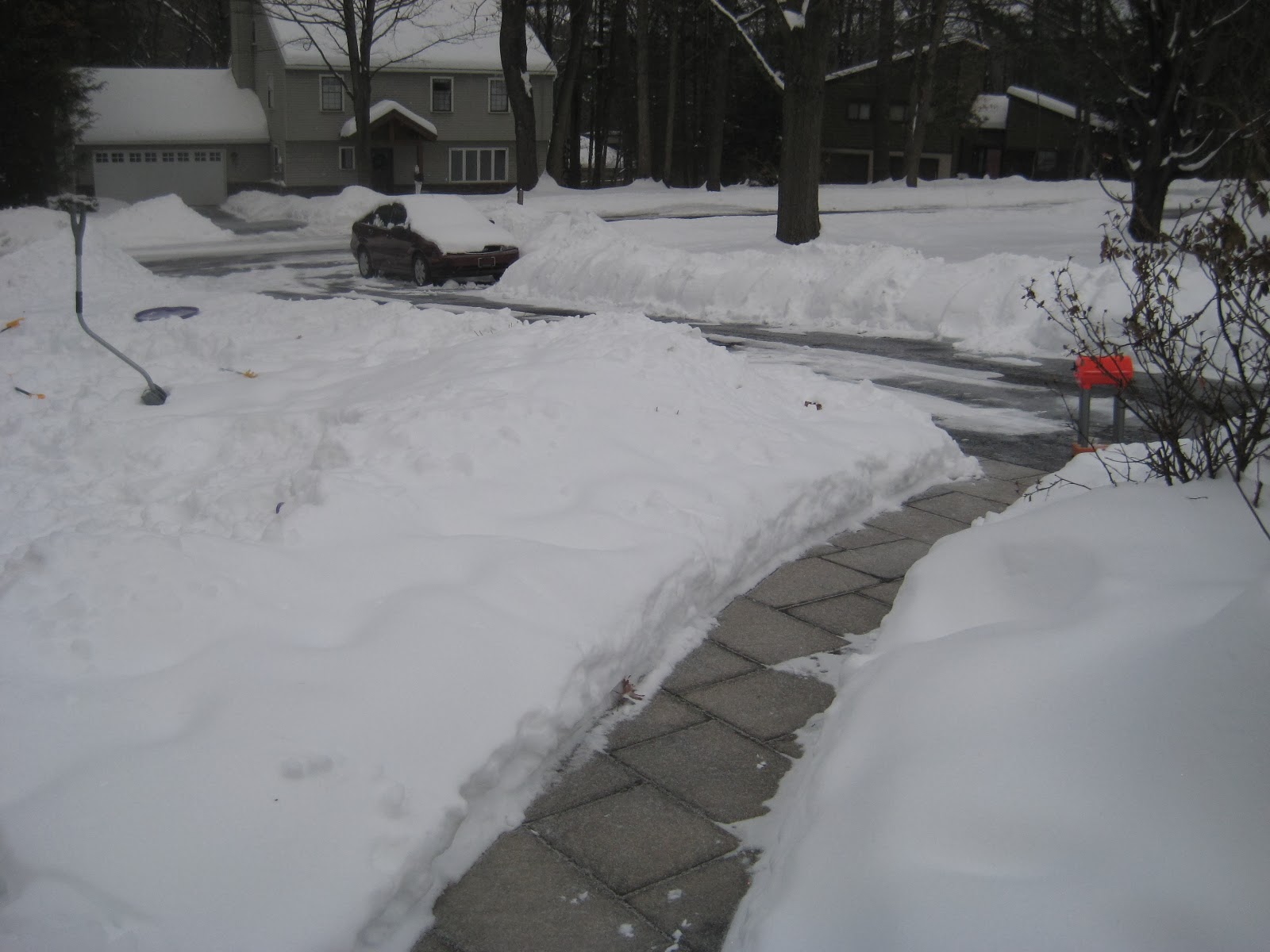 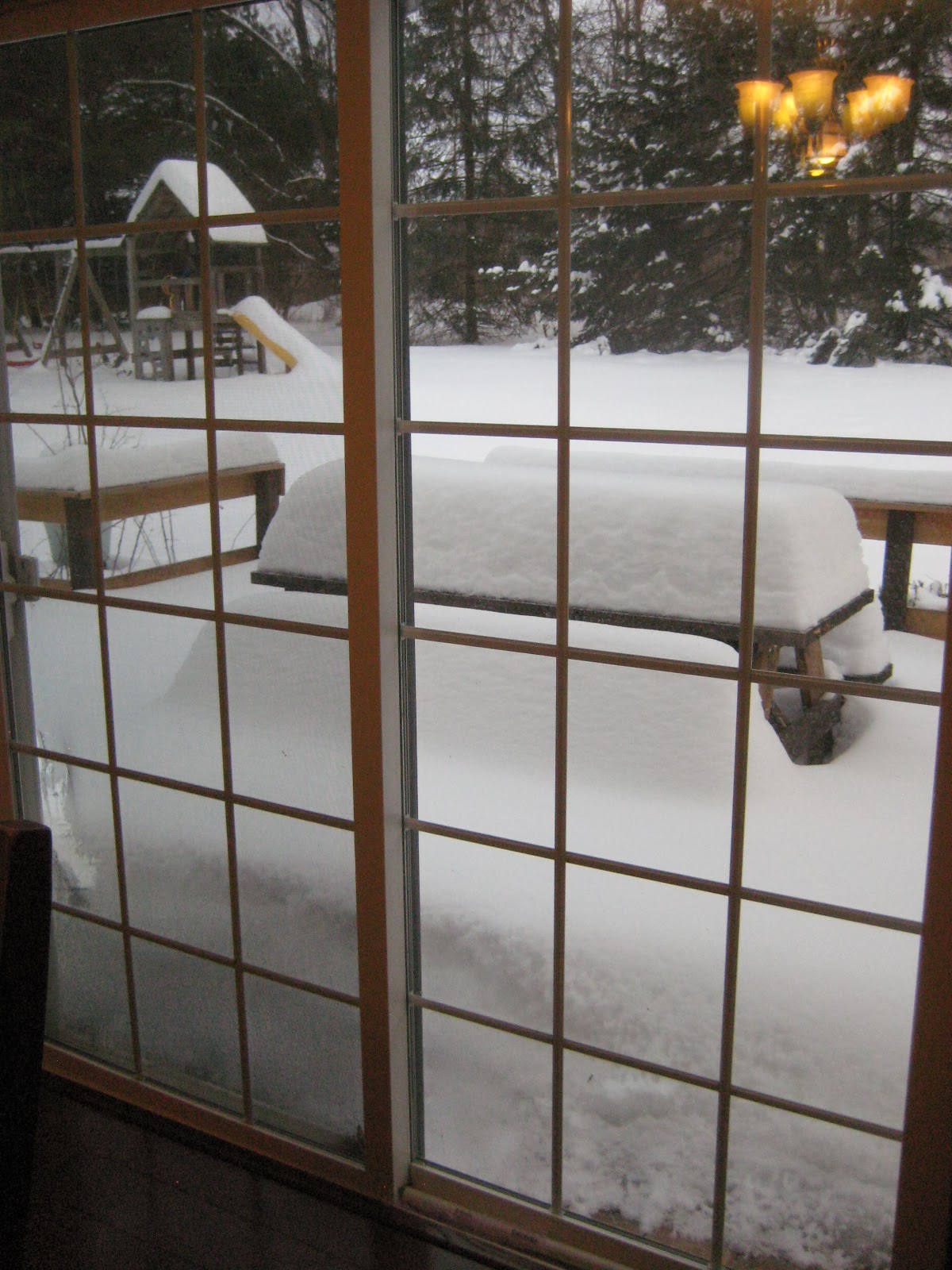 We also just noticed that some pretty large ice cycles have formed all around our house, which are pretty fun to look at
. 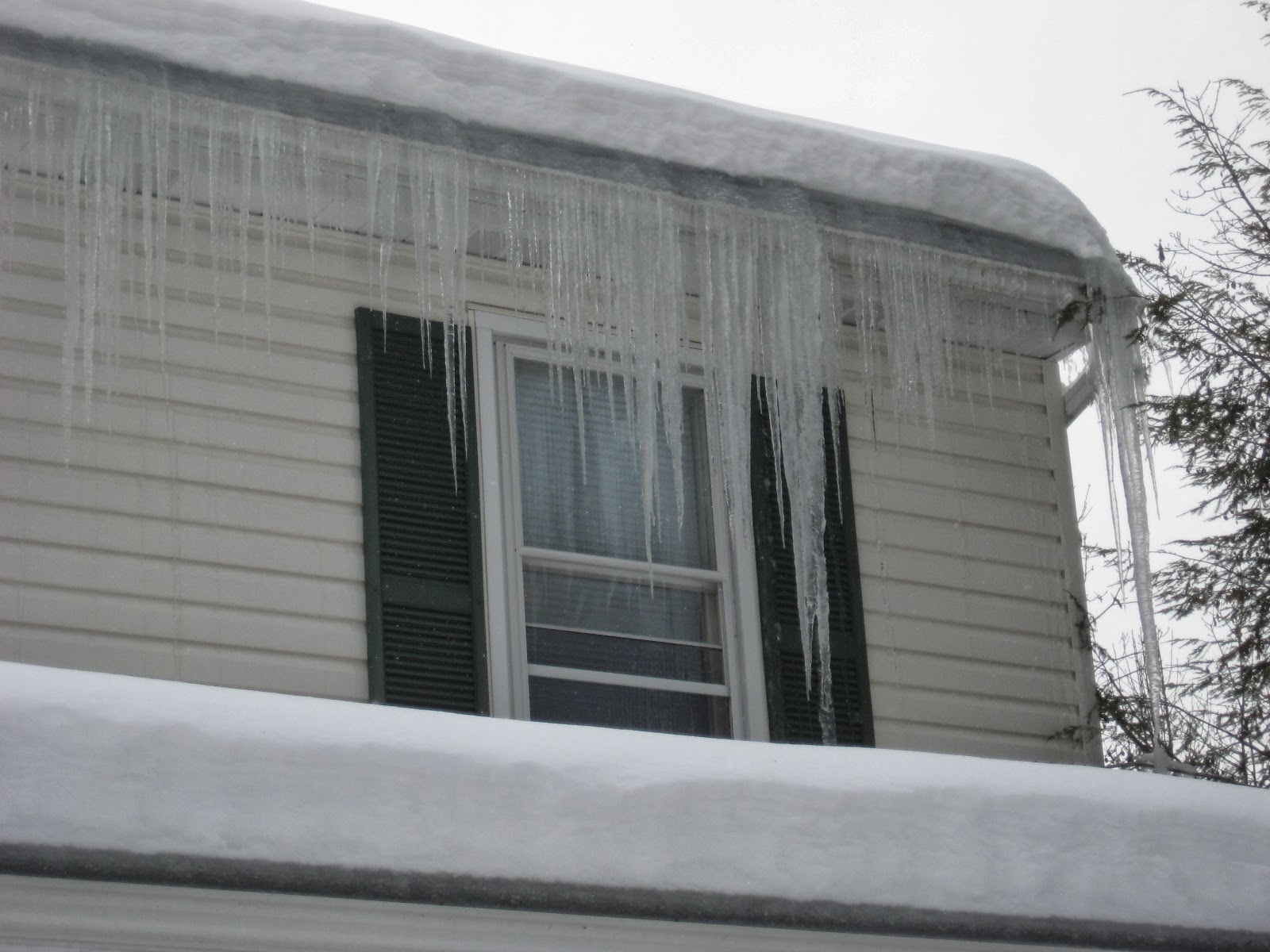 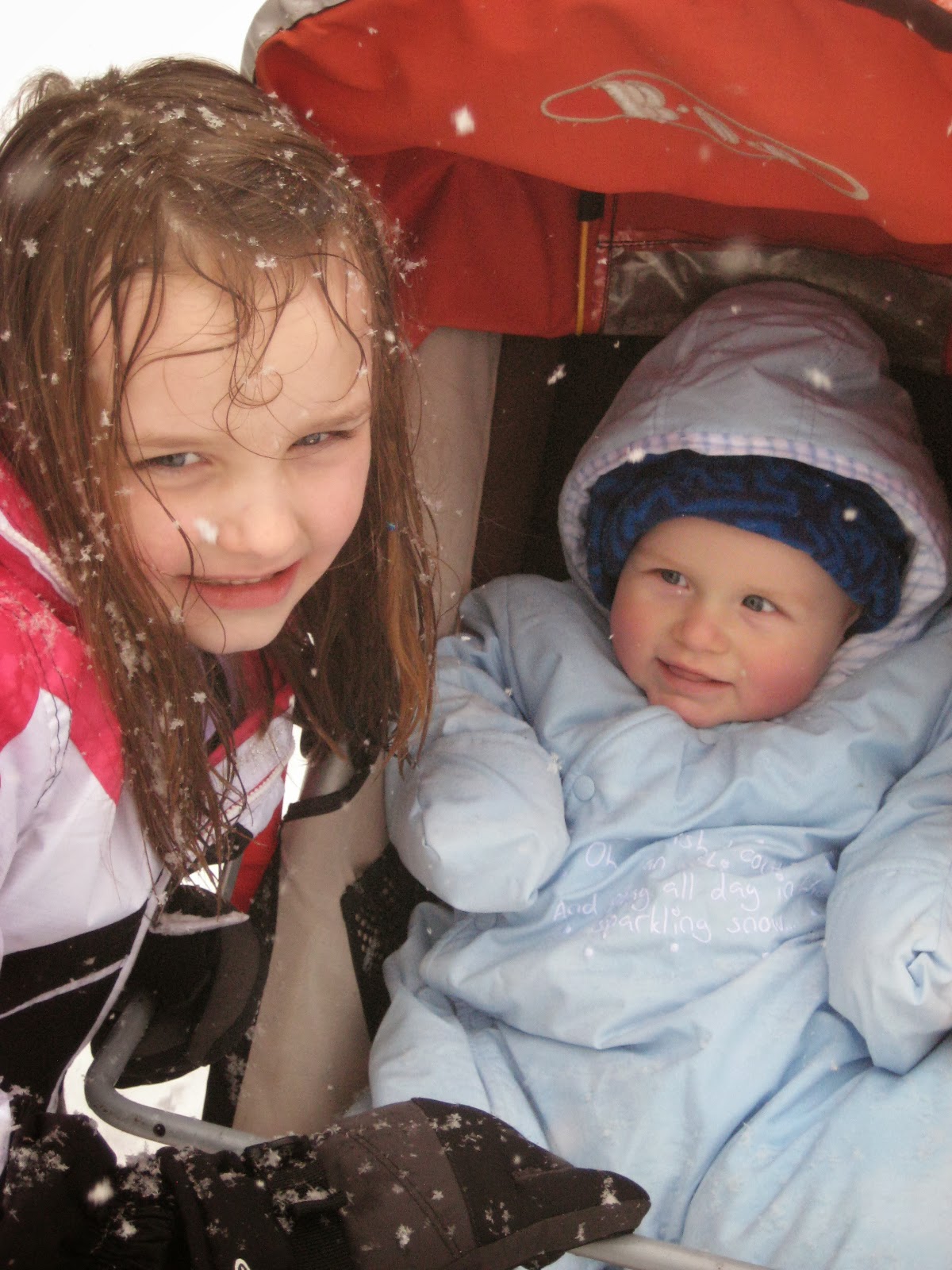 Ryzen is now coordinated enough that he's able to feed himself. Actually, he prefers that over having us feed him.  He's got 2 little teeth on the bottom and two that are just now starting to poke out on the top, but that doesn't stop him from shoveling small items into mouth. 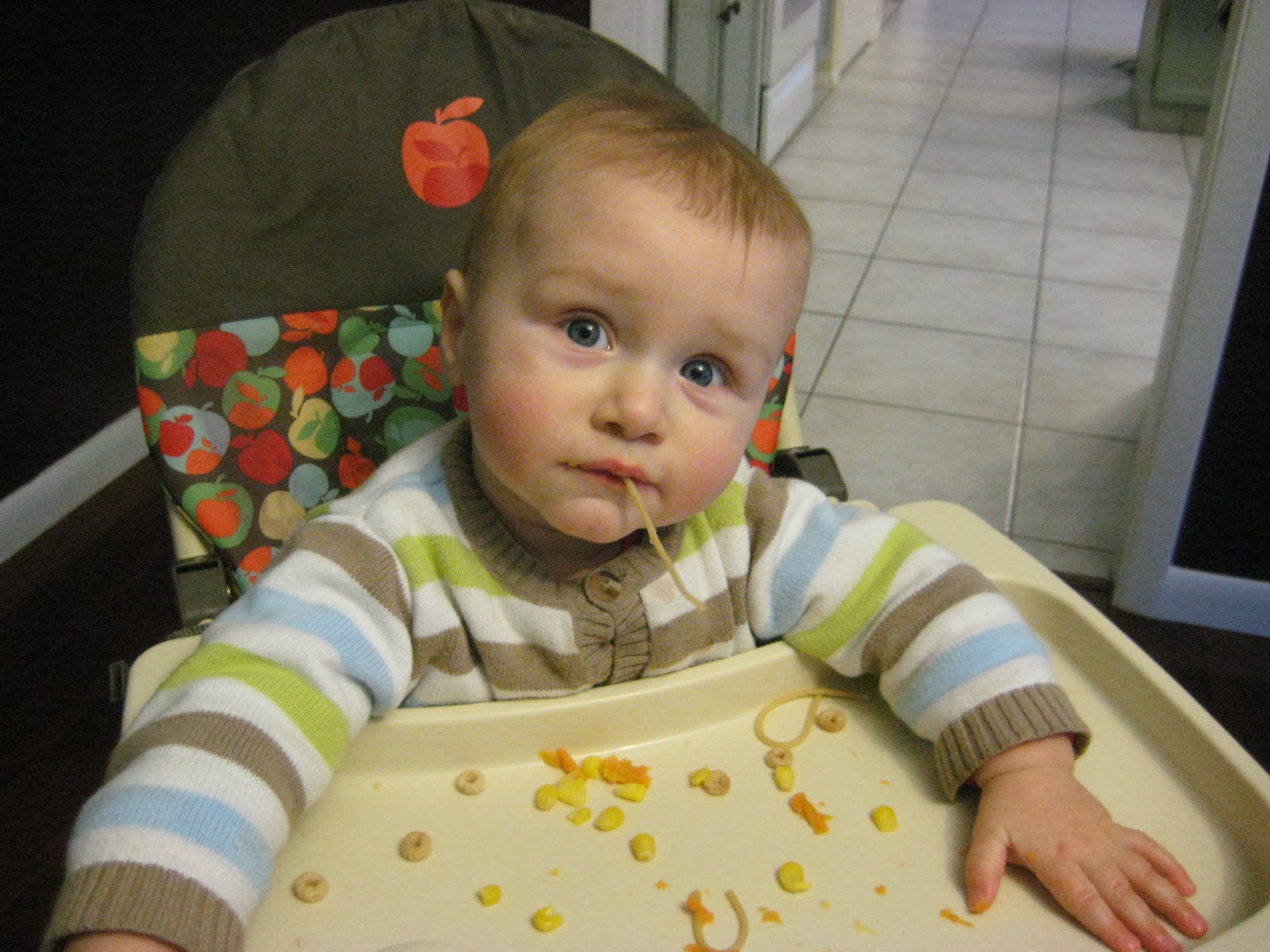 Eventually though, during every meal, he gets bored and demands that Tara holds him. His case of "MAD" (mother attachment disorder) has been getting stronger and he often will grumble if I hold him if he sees Tara around.  If she's not around, he's usually perfectly content to be with me.

Anyway, when he does end up in Tara's arms at the end of a meal, he's always reaching for things, making it a challenge for Tara to eat. 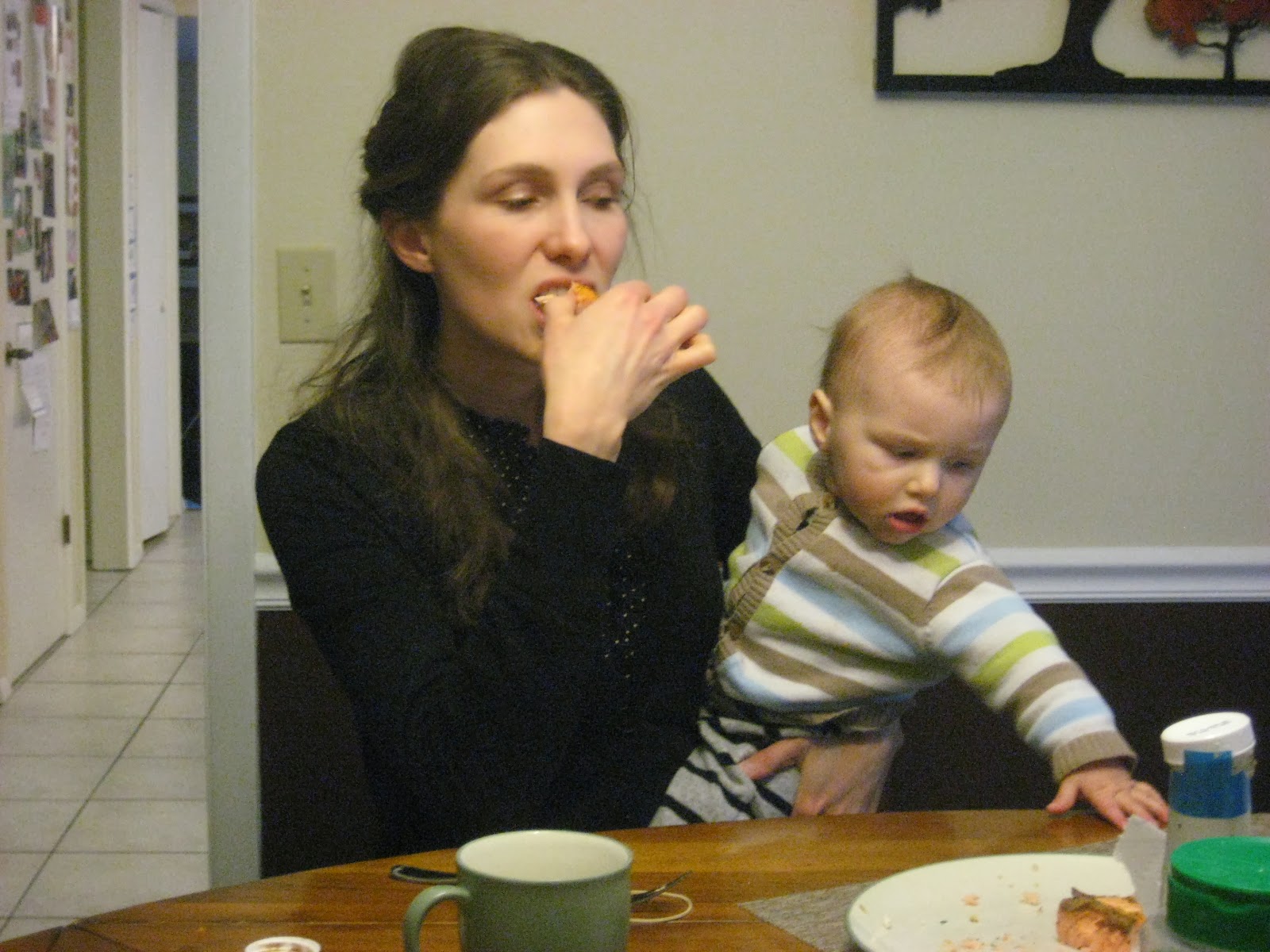 Keeping busy despite the snow

It feels like we've had a lot of time with Aria home these past few weeks because of school closures due to snow.  This past week, school was closed on Monday and Wednesday and on Tuesday she said that her ear and tummy hurt, so she didn't go to school either.  It's been fun to have more time together.  We spent one afternoon making valentine sugar cookies.  I've been thinking a lot about homeschooling for next year, and even got all of the paperwork together to possibly finish this year with homeschooling, but Dane felt it was best for Aria to finish the year with her friends and teacher, and I think he is probably right.
If we decide to home-school, I still have a lot of planning and reading to do in order to make sure we are prepared before we begin. 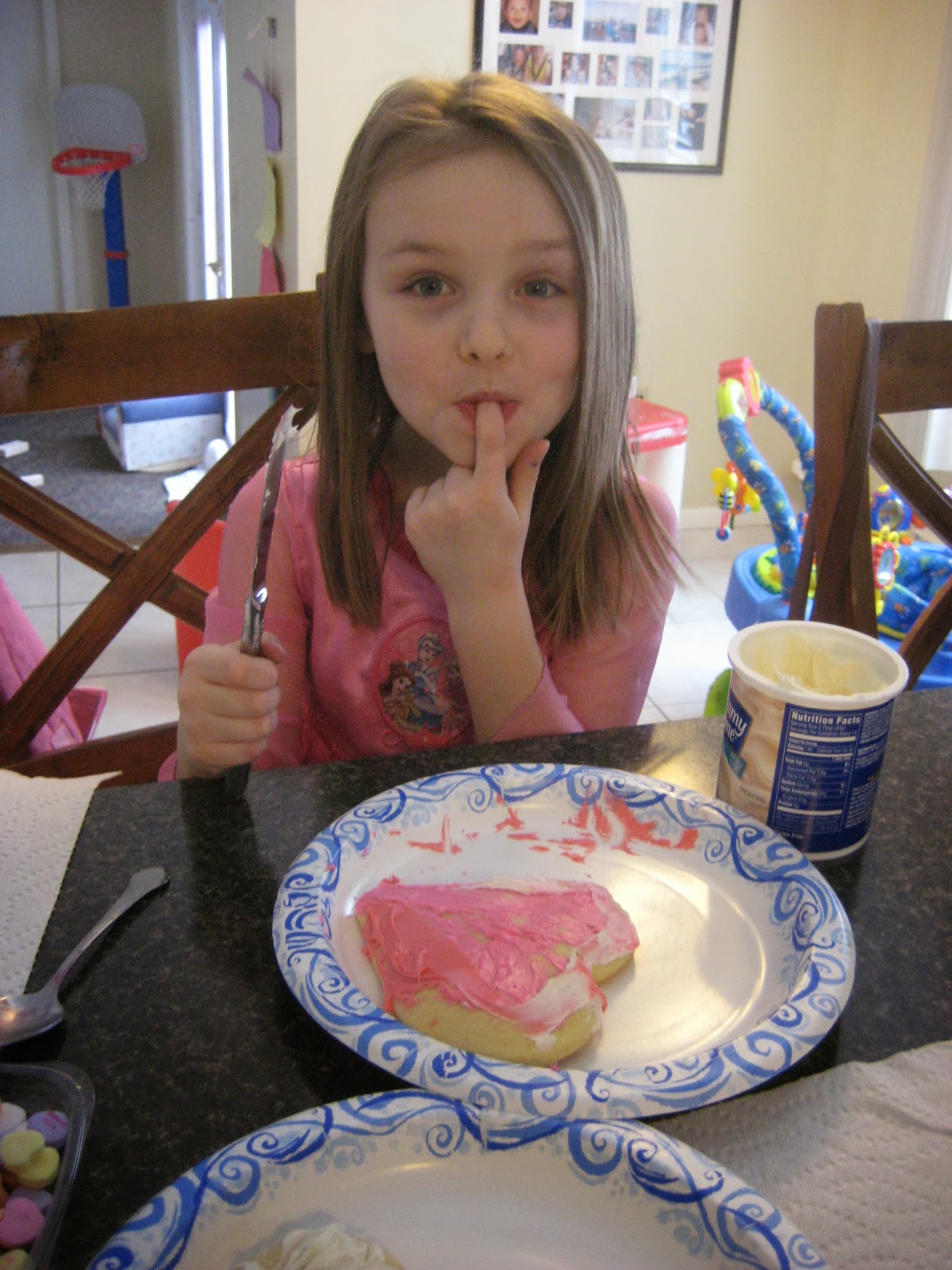 Aria had to create a project using 100 of a particular object.  We decided to use 100 crayons.  Aria counted out all 100 crayons, then we glued them to this gigantic poster board and used a blow dryer to melt them.  It looked pretty cool.  Unfortunately, wax particles blew out beyond the poster board and my board beneath and it was a bit of a mess to clean up. 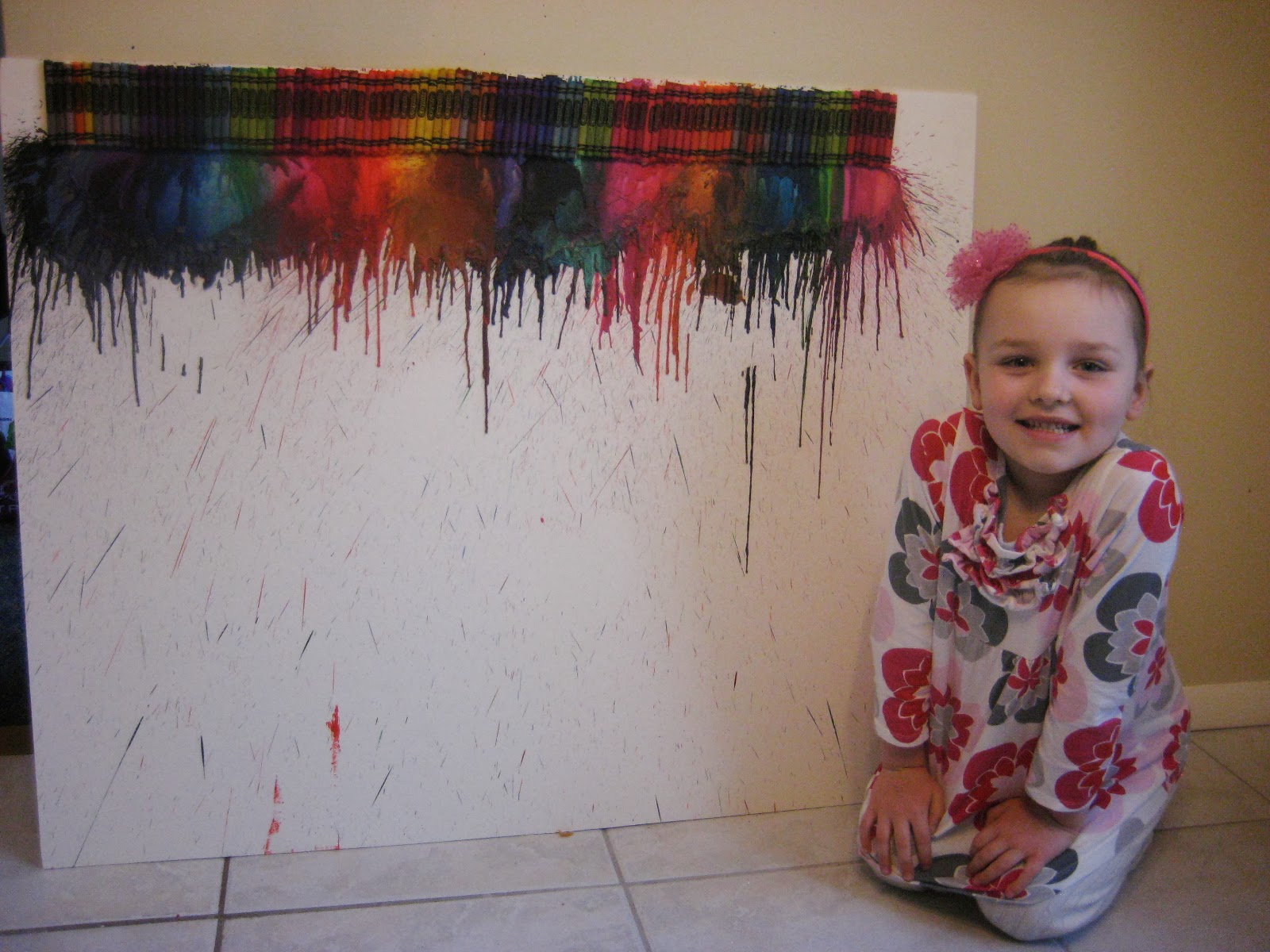 Zade continues to build new creations every day with his blocks.  He doesn't like to take them apart at the end of the day, so to help encourage him, I try to take pictures of each creation, so that we can remember what they looked like. 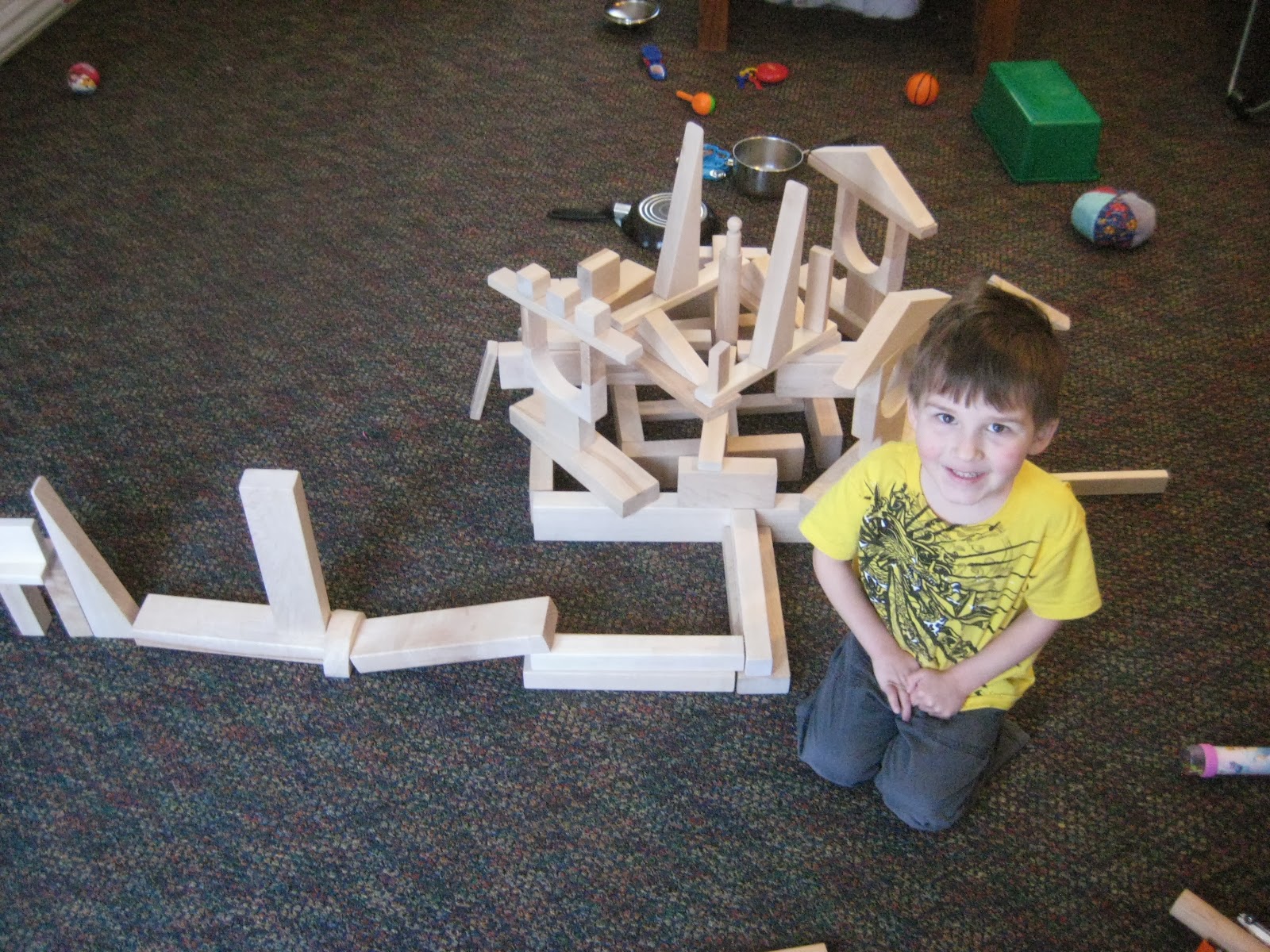 This week there was a battle between two heavy weight fighters: Zade and pneumonia.  Pneumonia got off to a fast start and pounded Zade, leaving him with fluid in both lungs and lying around like a limp rag for 2 days. There were times at night where he was struggling to breathe.  However, then divine Providence intervened and the tables turned for Zade.  In his darkest hour, we gave him a priesthood blessing and got him on some amoxicillin, and some delicious popcycles, and then he began to lay the smack down on old pneumonia.  Within 2 days Zade was declared the winner.  That said, he received some mighty battle wounds and is still fighting off a residual cough.

Since Tara was stuck inside and at home for the entire week, she spent time reading a great book entitled Simplicity Parenting and has been busy trying to apply the principles.  Among many ideas, the book discuses the role of kid's toys in either enabling or hindering a child from fully engaging in their imaginative world.  Tara decided to make the downstairs room directly off of the kitchen the toy room, and spent a great deal of time sorting, storing and discarding toys.  The kids liked the results and spent at least 5 hours fully engaged in play together with hardly a need for mom to intervene. 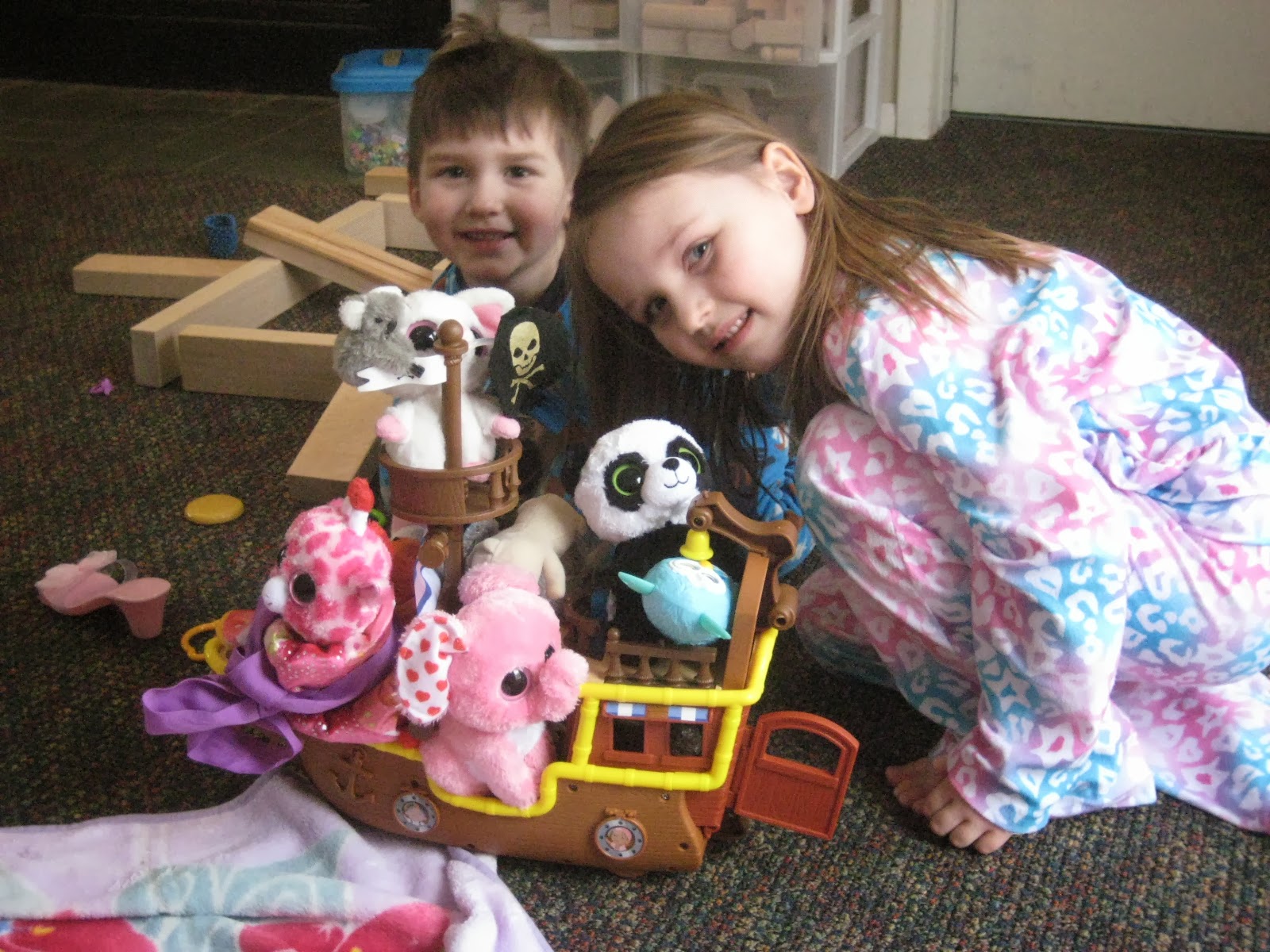 After a month of ridiculously cold temperatures, the weather finally warmed up to around 40 degrees Fahrenheit and the kids were able to go outside and play (while Dane was away on a business trip at the New Faculty Consortium in Leesburg, Virginia.)  Within the past 30 days it has been below 0 degrees on multiple occasions, which is abnormally cold for this part of the country.  Thank goodness that's not normal, because we are not fans having wind chills down to -30 degrees Fahrenheit. 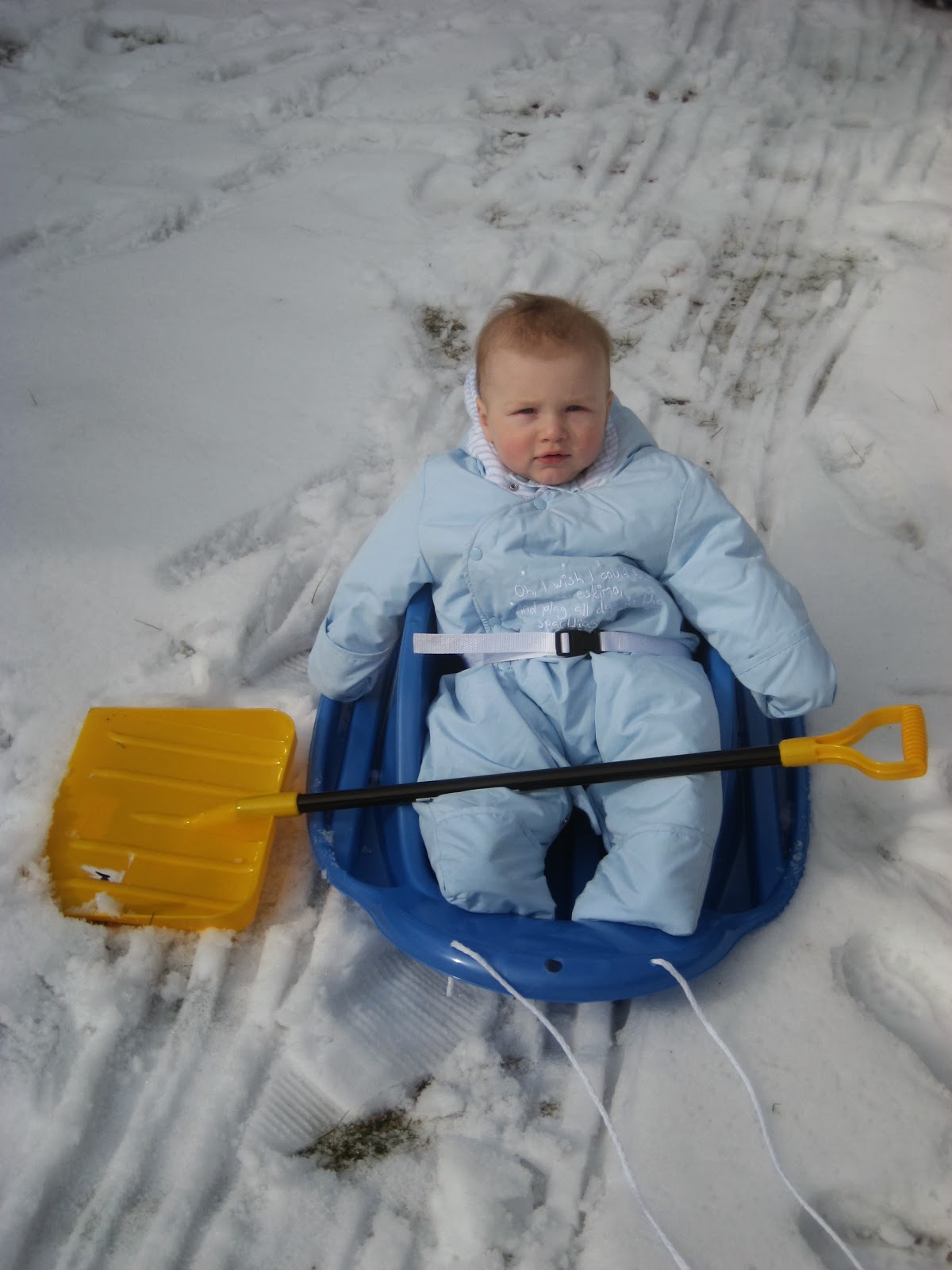 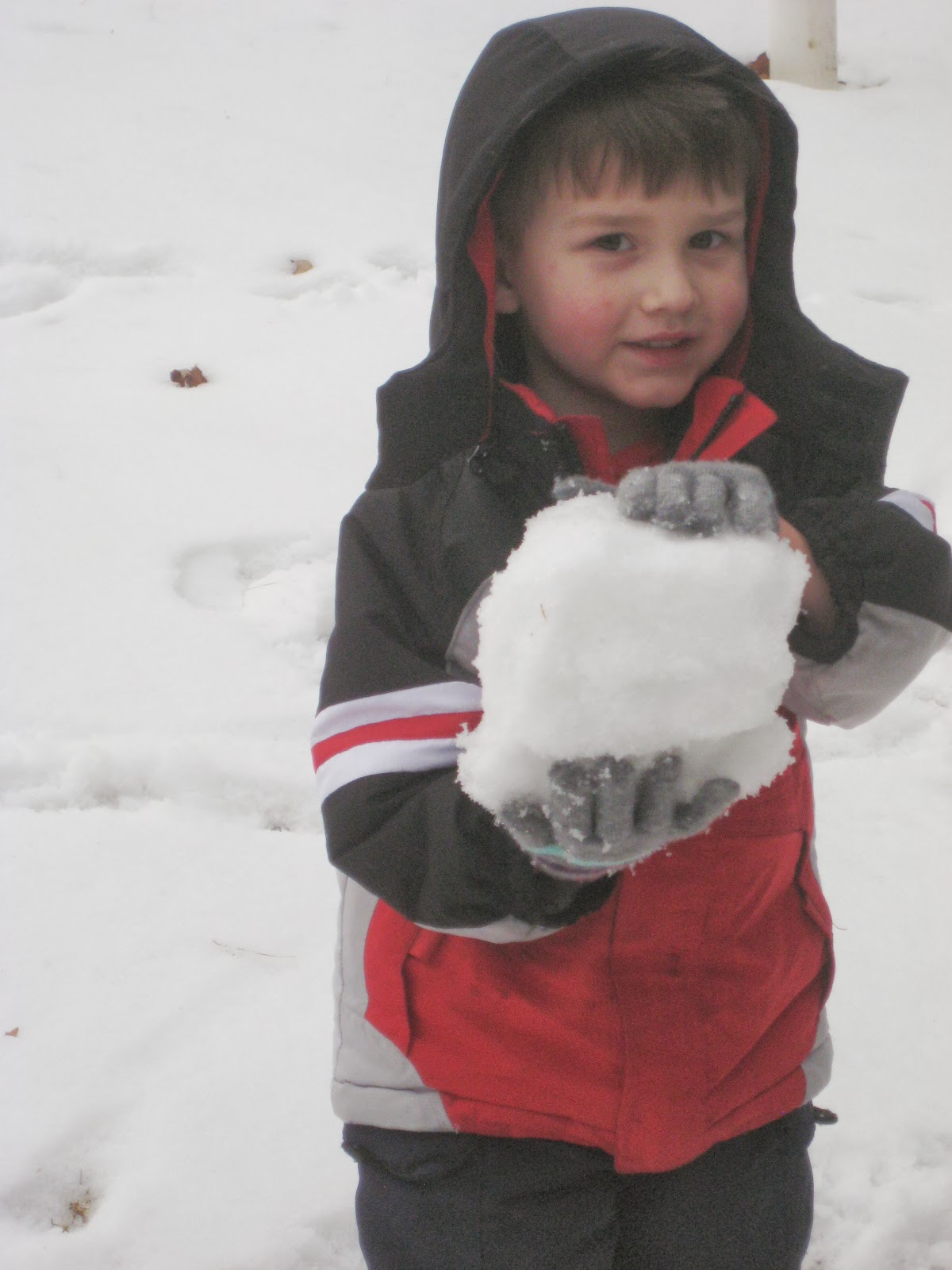 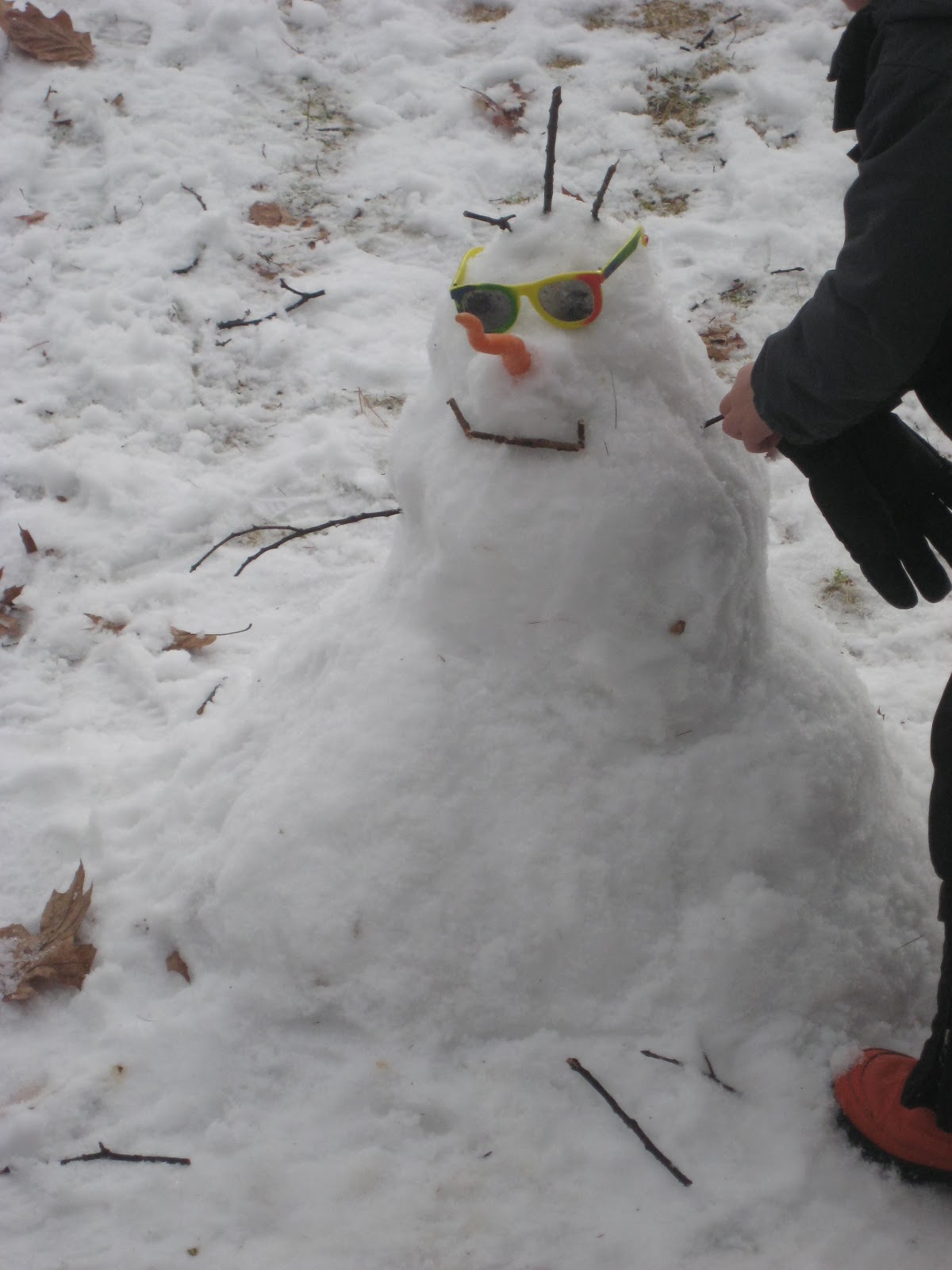