Azure - Back from the Dead

I got a call while I was at the U of A this week, asking if I was the owner of a cat named Jillian. This caught me quite off guard, because the cat we had adopted under that name was dead. One night back in November she had snuck out, and within 3 days we found her lying in the road by our house. We had always called our cat Azure, and since hardly anyone knew her original name, I became very curious. Apparently someone rescued a tabby cat and brought it to this vet, and the microchip in her neck said that she was our cat. This couldn't be true. Azure was dead! But if the microchip said this was Azure, she couldn't be dead! I just couldn't believe it. 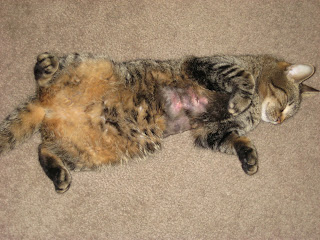 The car that had hit our cat back in November had smashed up its face, which is the easiest way to distinguish a tabby. It's size, weight, markings, etc. were all identical to Azure. Apparently we had burried the wrong cat. Unbelievable.

Unfortunately this phone call wasn't all good news. The vet told us that Azure had been attacked by a coyote at 8am that morning. Apparently, over the last 3 months she'd wandered the 10+ miles up the Rhillito River and was found in Bear Canyon (NE Tucson), where there's a lot of wildlife to hunt. A lady living up there was backing out of her driveway when a coyote darted by her car, holding a cat by the scruff of the neck. She hit the horn, and jumped out and ran at the coyote, which in turn dropped the cat. Apparently the coyote's teeth had punctured Azure's lungs, so she was gasping desperately, with glazed eyes, totally in shock. The woman thought she was probably going to die, so she sat down next to her and began petting her, trying to comfort her in her last moments. Then Azure rolled her head back and looked at her. She then realized, that Azure might have a shot at making it, so she rushed her to a vet. (In the picture below you can see some of the coyote's teeth marks.) 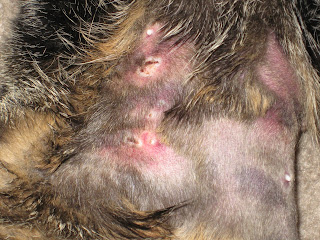 When the vet called, Azure was in stable, but fair condition. The vet clinic was closing before we could get there, so we went to see her 1st thing the next morning. When we arrived the next morning, before our very eyes, was Azure. She had hardly any visible wounds, but despite that she looked terrible. She was on oxygen, was quite weak, and was having quite a difficult time breathing. I had brought a friend from church with me, and we gave Azure a priesthood blessing. Previously, when I had prayed about what to say in the blessing, I had felt a prompting that it was in accordance with the Lord's will to promise her a "smooth and steady" recovery. So that was the blessing I gave her.

The next day we got a call from the vet, and she told us that the blessing must've worked, because Azure was doing "miraculously better" (those are her words). We were able to take Azure home that day, and she's been doing great ever since.

We feel so blessed to have our dear friend back. 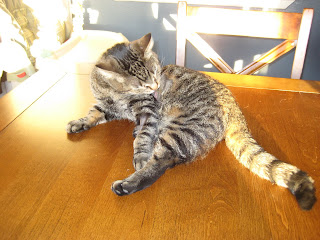 Aria surprised us this week with several firsts. At 10 months old she started crawling around, and figured out how to pull herself up into a standing position. On top of that, she uttered her first word. As our cat Mira walked by, Aria said "Kit-ee". Tara then asked Aria, "Did you just say Kitty?" Then Aria said Kitty again. She's subsequently said Kitty some more since then. And I was so sure "Ma Ma" would've been the 1st.

For Valentines Day we went to Old Tucson studios, where several John Wayne movies were filmed. We had fun watching the gun fights, comedy shows, and playing around on the sets. 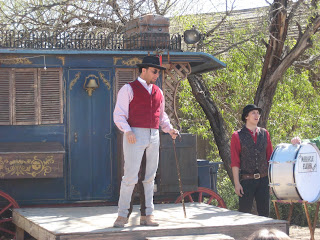 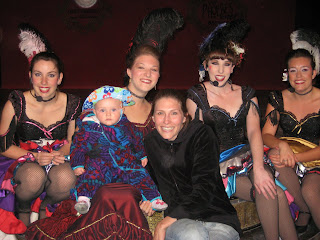 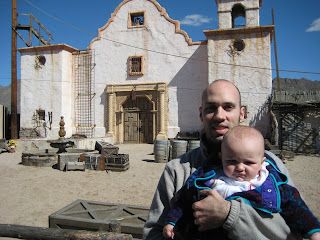 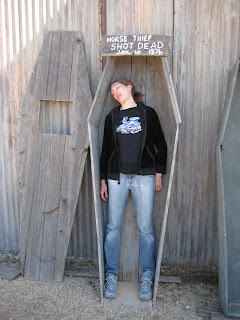 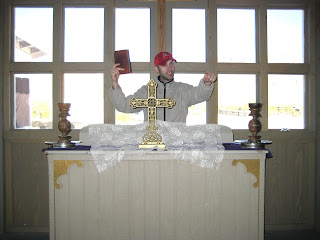 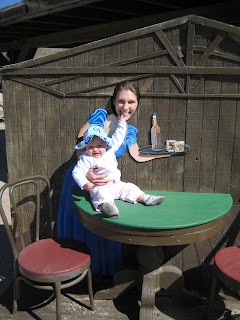 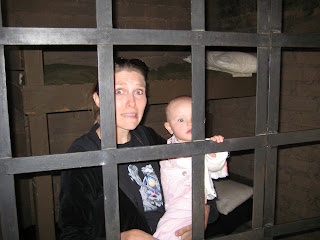 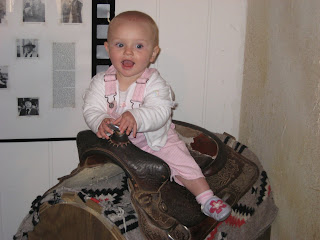 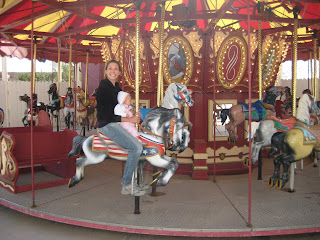 One of Aria's new found hobbies. 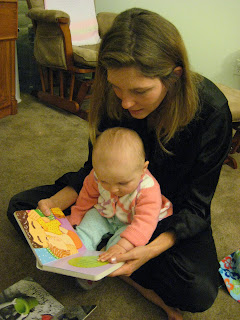 Not every Cheerio agrees with Aria 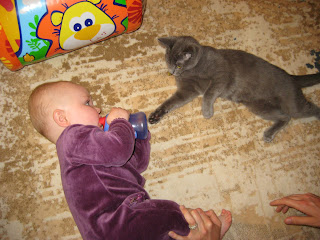 Today Tara took Mo Mo, our newly adopted kitten, back to the Humane Society. He turned out to be so manly, that he was producing more allergens that Tara and Aria could tolerate. Both ladies were suffering immensely, and despite our best efforts to reduce the allergens using an air filter, allergen wipes, a HEPA vacuum cleaner, covered litterbox, and bathes, nothing seemed to help.

Luckily for Mo Mo (Moses) he is one of the sweetest, loving, and playful kittens, so we're confident he'll end up in a good home. We're just heart-broken he won't be in ours. Despite this dumpy situation, we feel peaceful that the best decision was made for all. Dane will particularly miss him eternally trying to pounce on his hands, racing spastically around the house, and butting his head upward into Dane's hands to be petted. He will be sorely missed. 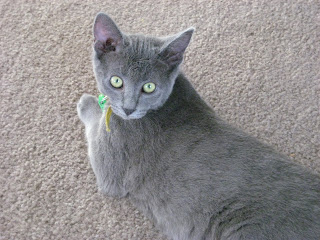 
Here's a nice clip of one of Aria's many laughs. This is the sputter laugh.

Below we've also attached some highlights of her campaign to live w/o clothing. Her attempts to free herself of this fashionable velour top create a fetching double chin. Yes, very attractive. 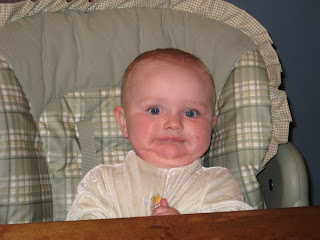 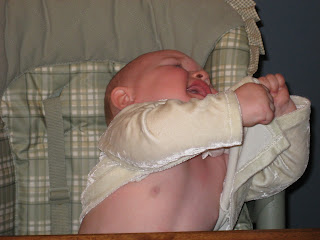