Zade is enjoying kindergarten.  He has made a lot of new friends and is very positive about going to school each day.  He has already been invited to a number of birthday parties, which he loves!  Zade has begun trying to write words by sounding them out.  He loves to tell me about all the animals that he learns about at school. 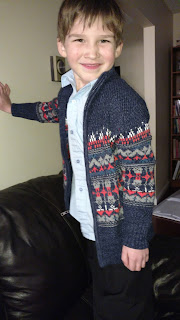 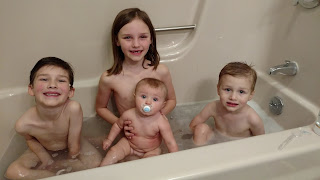 I enjoy being at home each day with my little Ryzen and Nova.  Poor Ryzen is just constantly sick! But despite almost always having a cough or a runny nose or watery eyes, we still have fun together. Ryzen has started to develop an imagination and loves to play with his kitchen, build things with magnets, and play hide-and-go-seek.  He likes me to cuddle up with him at nap time which usually results in us both taking a nap. :) 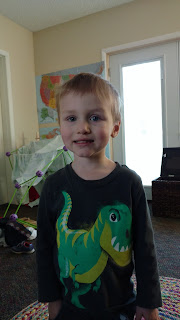 Nova is becoming such a lovely girl.  She hardly spits up now. (Hurray!) She sometimes sleeps through the night.  She is a champion nap taker and just so easy going.  We love to cuddle her and hold her close all the time. 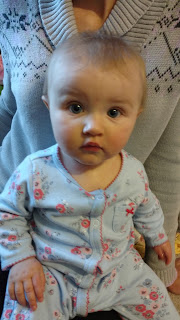 Dane had to go to a conference last weekend, so I took the kids to Penn Skates.  Ryzen had fun riding his bike on the rink. 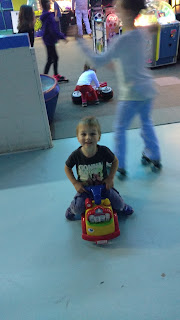 Aria and Zade are becoming proficient roller skaters.  They don't need any assistance now and Aria had fun pushing Nova in her stroller on the rink while she skated. 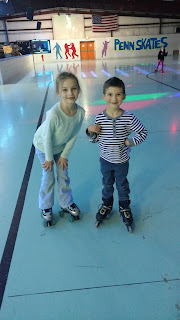 We finally had our first big snowstorm!  Nova wasn't too thrilled to be dressed up like a big marshmallow. 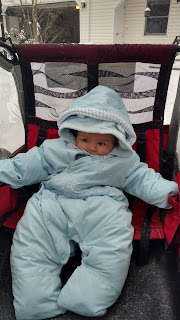 Aria and Zade love to play in the snow.  They've really gotten into sledding.  Even Ryzen had fun sledding down the hill. 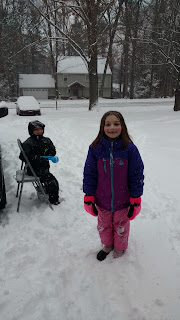 This past Tuesday we met Katrina and friends at a larger sledding hill.  I figured out how to sled with Nova and Ryzen at the same time by strapping Nova onto me.  The hill wasn't too fast so I felt this was safe.  We had a lot of fun! 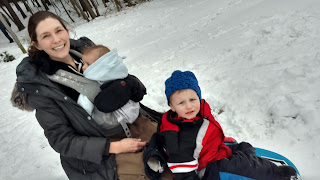 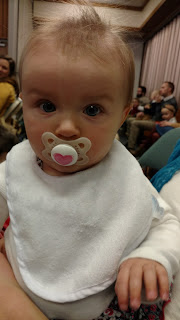 Ryzen playing with his blocks, trains and cars. Now that Dane and I finally have a babysitter, we took the time to go on a real date!  Dane took me to a fabulous restaurant called Spatz.  The salad and shrimp were delectable, and Dane had sweet potato fish that tasted like fish pie! 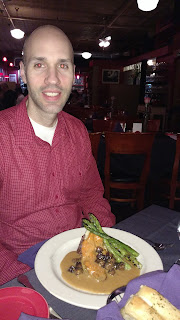 Afterwards we went ice skating.  I hadn't been ice skating in so long.  I felt a little wobbly at first, but soon was doing my twirls on the ice. :) I still would like to take private ice skating lessons one of these days and learn some more tricks. 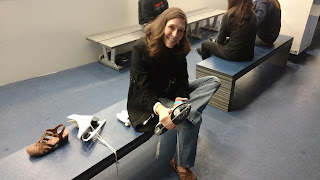 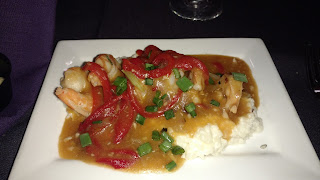 We did a lot of fun things during the Christmas holidays.
Our library holds an event each year where the kids get to hear the story of "The Polar Express" and then go on a trolley to Santa's workshop. 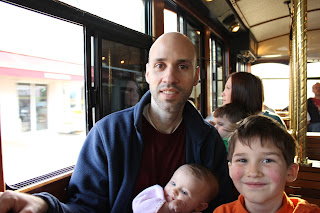 Here we are at "Santa's workshop" where the kids got to pick out a toy and decorate a picture that was taken of them with Santa. 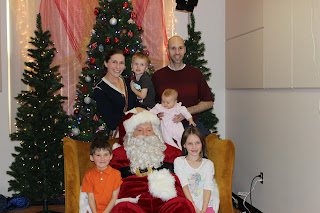 I took Aria and Zade to the Nutcracker Ballet.  We had almost front row seats, which was awesome.  The kids really enjoyed it and it even inspired Aria to want to take dance lessons so she can be in a ballet. 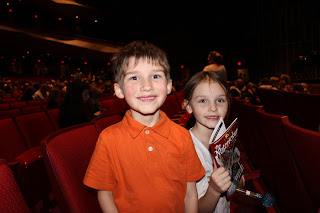 Our relator, Brian, dresses up like Santa and comes and visits every year.  He came this year and had a nice chat with all the kids about whether they've been good and what they would like for Christmas. 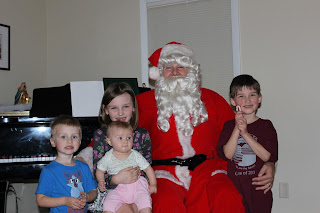 Aria performed in the production of "Cinderella" with Singing Onstage Studios.  She was Drizella in the production.  She had quite a few speaking lines, and sang and danced throughout the entire show.  She had been practicing all fall and did a wonderful job!  We didn't get any pictures at the show unfortunately, but here she is in her blue Cinderella shirt that she wore throughout the performance. 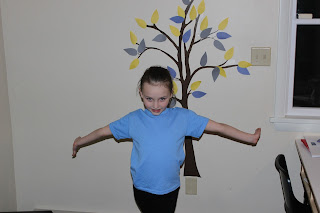 We invited over some friends from church, the Nielsons, and the Woods, and we all had dinner together and then the children dressed up and acted out the Christmas nativity.  It was a little crazy with all those boys, but I think the kids had fun. 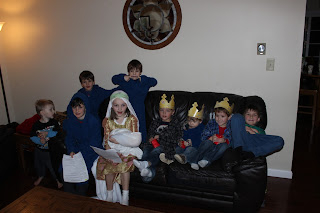 The kids and I made gingerbread cookies from scratch.  They also enjoyed decorating them with colorful frosting.  We then made the rounds through the neighborhood and caroled at a few close friends' houses. 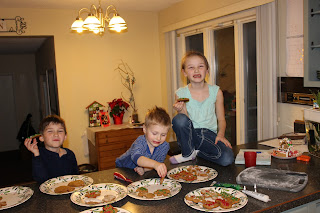 Christmas morning was fun as the children received exactly what they had requested of Santa.  Zade received a gigantic set of legos to construct a ship from "The Lego Movie." 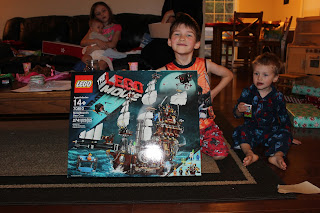 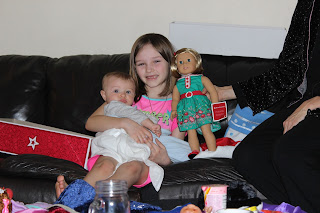 Ryzen received wooden trains and a set of wooden train tracks.  The kids also received clothes, wonderful presents from grandparents, and a large set of trolls that I found on Ebay.  I loved trolls as a kid, and really wanted to give the kids some.  I ended up winning a batch of 30 trolls from Ebay, which may have actually been a few too many. :)  Oh, and I also bought a lovely hand-made wooden play- kitchen on Etsy, along with hand-made wooden dishes that is for Ryzen and Nova.  It is beautiful to look at, which is nice since I keep it in the actual kitchen and Ryzen loves to play with it. 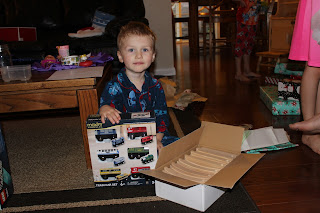 Zade put together his lego ship almost entirely by himself over the course of a few days.  The box says it is designed for kids 14 years and up.  I think it has over 2,000 pieces in it! 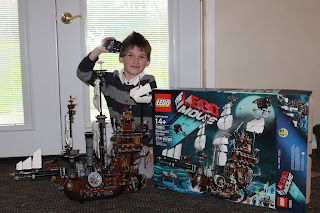 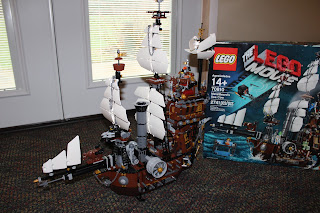 My dear, sweet friend Katrina, who I met in our small Waldorf-inspired community, invited Aria to come over to her house and make a hand-made doll.  Katrina has an old-fashioned sewing machine that works using a foot pedal.  Aria loved making her doll!  She still needs to work on it some more before it will be finished, so we will need to spend another afternoon at Katrina's house. 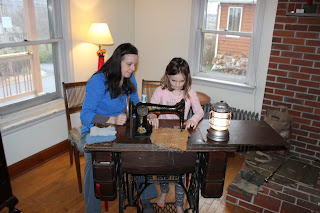 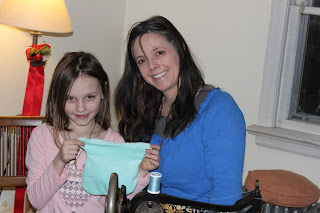 Aria and Zade had fun building creatively with their blocks.  Zade looked at his finished product and exclaimed, "I just made the great and spacious building!" 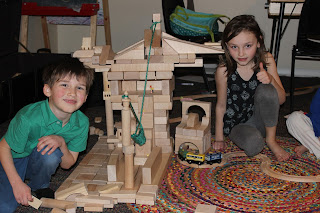