We went to Aria's school on Saturday for one of its many fundraisers.  They had lots of fun things for the kids, including a live theatrical performance of the boy who cried wolf: 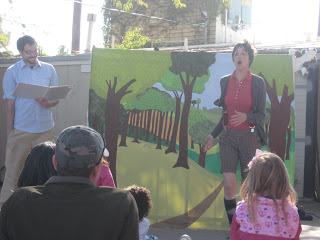 Story time about how the Coyote put all the stars in the sky: 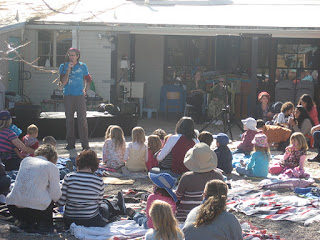 And live alternative music for the parents. 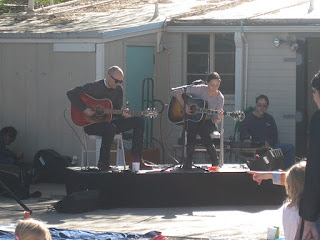 The kids had a great time.  Here are kids playing on the playground afterwards. 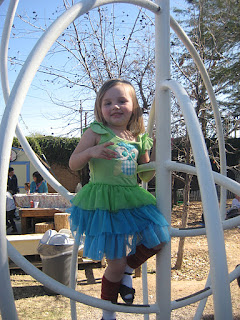 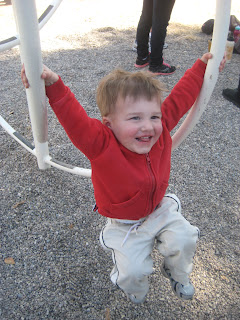 For our family activity this week, we went to the Arizona vs. Oregon State gymnastics meet.  We had 2nd row seats, so the view was fantastic.  I was happy to see either team win, and the Beavs ended up on top.  Our kids were pretty well behaved, however as expected, the meet messed up their sleep schedule.  (Aria tuckered out and slept in Tara's arms for the 2nd half of the event).  :)  Zade watched the whole thing happily and didn't get to bed until around 9:30pm (he was up again the next day at 5:45am.  Brutal!)  Needless to say, both children were cranky the next day. Now was it worth it?  We're still not sure.... but at least we had fun.
Posted by Dane & Tara at 8:22 PM No comments:

This week, Tara finally succumbed to the persuasive advertising on PBS and subscribed to ABCmouse.com so that Aria could try out online learning to supplement her pre-school. We should've seen this coming, but with Aria, if she likes something, she goes all in.  Within a couple days, ABCmouse.com became an obsession.  She wants to use the site for hours on end, and would rather use it than watch TV.  She's gone from not being able to do anything on the computer to now being able to use a mouse as well as I can.  It's been a  strange turn of events.

The way the site works is that she basically has to complete a bunch of lessons, and each time she completes one, she earns tickets that she can use to buy things, such as outfits for her avatar, things to put in her virtual bedroom, etc.  So, in addition to teaching her the alphabet, math, matching, art, etc, it also teaches her about earning things and saving up for things.

Her favorite thing has been to purchase little hamsters, hamster tubes, and hamster cages.  Her 3 little hamsters wander around this little maze she constructed, all the while quirky, happy music is playing.  It's fun to see her having fun learning. 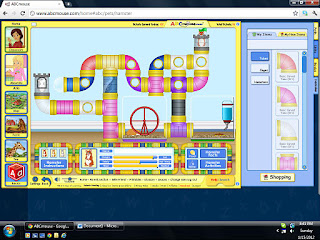 In our final week visiting Tara's family in Utah, they packed in the activities.  They went to Hoggle Zoo and had to sit on the very scary spider with Grandpa D. 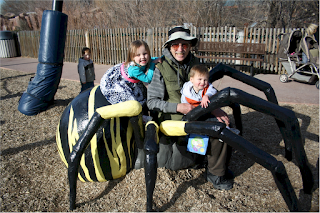 They also went to the Dinosaur museum, where Aria and Zade had a great time playing in the sand piles, looking for bones, and building sand mountains.  Neither of them liked the man eater in this picture. 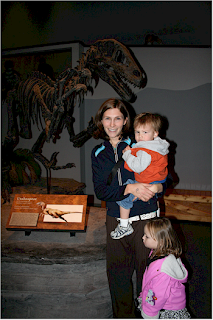 They also had fun playing around with Grandma D. 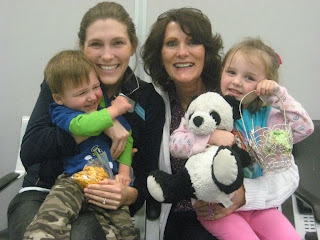 Tara and I decided to celebrate new years early and went to Eve in downtown Salt Lake, while Tara's parents were so kind as to watch our kids. 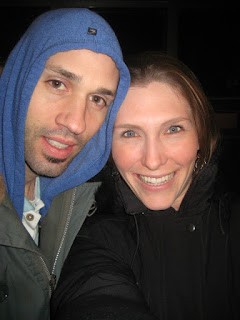 We went to a U2 laser lights show at the planetarium, which was probably the coolest laser show I've seen.  Then we went to the Salt Palace where they had a room full of inflatable battle gear.

There was an obstacle course that we raced through. 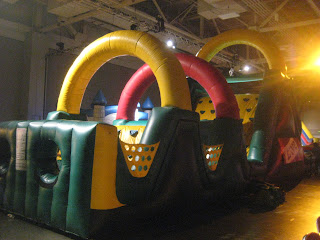 Then we jousted with reckless abandon.  It was probably the most even event we did, since balance was just as important as strength.   (Here are a couple random strangers duking it out). 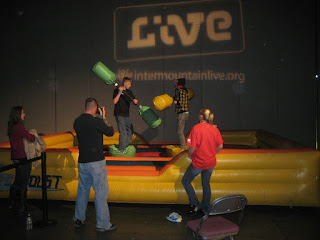 We also got on Sumo suits and did some wrestling.  It was basically a pushing contest. 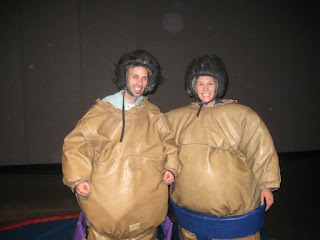 And lastly we put on gigantic boxing gloves and had at it.  Tara was a lot tougher in the ring than I expected.  She came out firing with a flurry of punches and each round I spent 95% of the time trying to shield my face and not to get knocked over.  Then, she'd get tired, and I'd take a couple mighty swipes at her body and take her down.  :)   (Here's a pic of the people who battled after we did). 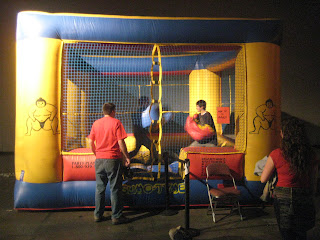 It was the closest thing we've ever had to a fight in our marriage. :)  And it was a lot of fun.

An unrelated, but funny thing that also happened this week is that when Tara did the laundry this week, she didn't notice that Zade had taken a crayon and hid it inside of his footed jammies.  Thus, it melted inside of one of the feet, so after wearing the jammies one night, his entire foot turned the color of the melted crayon.  :) 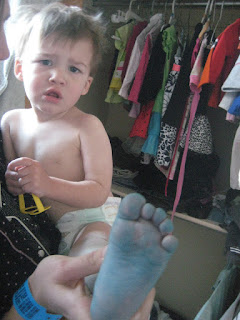