To celebrate Zade's 2nd year of life, we went to Chuck E Cheese's.  Tara brought Zade a soccer cake, we ordered a pizza, and sat back and watched the music show.  For a present, we got Zade some Legos, since he has really enjoyed playing with them when we've gone to other places. 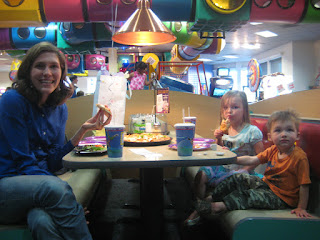 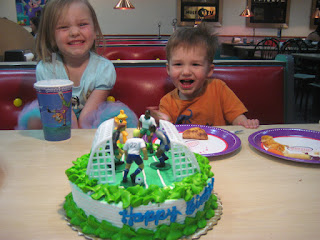 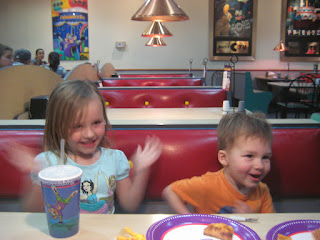 Here's Zade trying to blow out his candles:

And here he is rocking out to the show:


The kids loved going around to all the rides, popping in tokens, and going crazy. 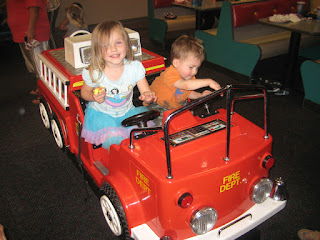 Aria must have really had a fun time at Zade's birthday party, because that night as she was lying in her bed, she said that she wanted to go to Chuck E Cheese for her birthday and for mommy's birthday and for daddy's birthday.  She lay quiet in her bed for a moment, then burst out, "When is it going to be my birthday? I've waited forever!" Then she was quiet again, and said, "I've waited for like 30 minutes."  I told her that her birthday would come faster if she went to sleep.
Posted by Dane & Tara at 5:43 PM No comments:

Aria decided that she wanted to be our parent one night, so we switched roles.  It was so much fun.  Tara and I huddled under a blanket, while Aria read stories to us, and then we began making all the kinds of requests/demands that kids do, such as asking for juice in a sippy cup, demanding it come in the blue cup, and after she pretended to bring it to us, we complained that we wanted it in the red cup!  It was so much fun to dish out the demands we hear all the time. :) 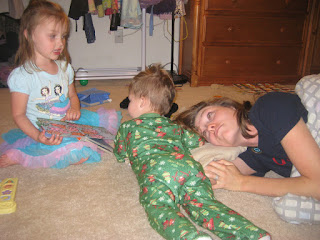 A few days later, Tara noticed that Zade's hair was getting a little long, and wanted to take him to get a hair cut.    Since my dad said he used my nogon to learn to cut hair, I decided I too would learn on my son.  :)  Amazingly,  the hair cut turned out pretty well.  Considering he always has unkempt hair, a knuckle cut fits him well. 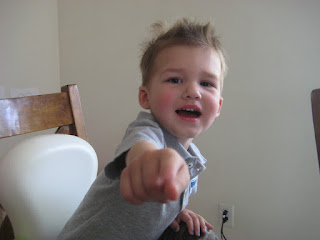 Lastly, I was released from being the ward mission leader at church after ~1.75 years, and now will be serving as a Gospel Doctrine instructor.  I've really enjoyed meeting so many neat people and helping answer their questions about the gospel, so I'll miss that calling.  However, I served as a Gospel Doctrine teacher in Troutdale, Oregon several years ago, and really enjoyed that calling, so I'm excited about my new calling.
Posted by Dane & Tara at 3:06 PM No comments:

We went to the Renaissance Festival outside Phoenix last weekend.  We'd gone to something similar in Eugene, Oregon many years ago, but this was way more impressive.  The festival has what appears to be a permanent village that they've built on the outskirts of the Phoenix metro area.  There were tons of people dressed up and tents with performers all around.

BARELY BALANCED
These 3 acrobats (small, medium, and large) put on quite a show.  They were hilarious. 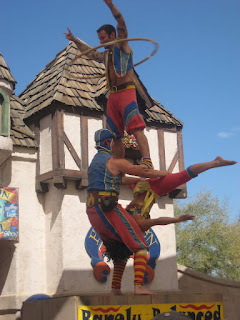 LONDON BROIL
These guys cracked a lot of jokes while juggling knives, flaming batons, and all sorts of stuff. 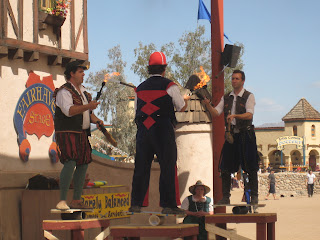 Whipmaster Adam Crack.
We saw him use his whip(s) to obliterate roses that his female assistant was holding in her mouth, split a pop can in half, and even whip something off of the top of his head.  To top it all off, he even used a flaming whip. CAST IN BRONZE
This guy had a keyboard that was attached to a network of bells, which was really neat to hear, although it was extremely loud. 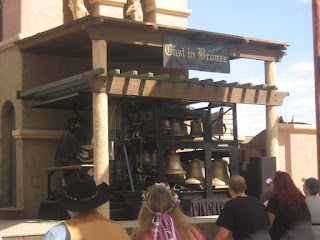 DRAGON
We saw this person dressed up like a dragon, and Tara tried to pose next to it.  As you can tell from Zade's face, he did not think that was such a good idea.  :) 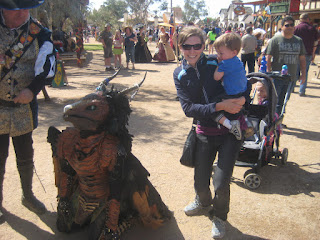 GREEN MAN
This guy's costume was pretty cool, although the picture doesn't do it justice.  He really looked like a tree, and walked around the festival grounds so slowly, that if you weren't paying attention, you could easily mistake him for part of the scenery. 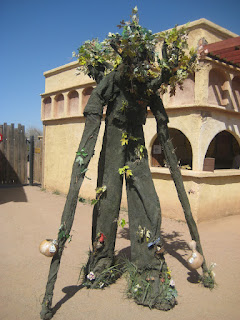 We and the kids had a great time, but by the middle of the afternoon, the fact that Zade had not had a nap yet began to take its toll.  He began to become extremely whiney, as any small child would, so we had to pack up and leave.  Unfortunately, we were not able to see the jousting tournament, but aside from that, we got to see most everything we wanted.
Posted by Dane & Tara at 2:47 PM No comments:

I was presenting a paper at a conference in New Orleans last week, so we didn't update the blog last week.  Although I enjoyed seeing the downtown, I wasn't a big fan of the greasy food.  :)

This Saturday, we took the kids to help clean the church, and then had the privilege of having the missionaries come over to our house to do service.  They cleaned up our weed infested backyard, and now it looks great.  A few days earlier they had asked if there was anything they could do for us, and I joked that they could weed our backyard.  Missionaries take jokes seriously.  :)

In the afternoon we went with Marcy and her daughter Casey (who is one of Aria's friends from pre-school) and hiked Pima Canyon.  Zade wanted to walk the whole way and charged ahead with reckless abandon.  He would've biffed 20+ time if I hadn't been holding onto his hand. 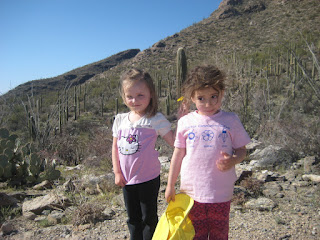 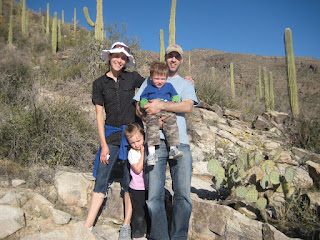 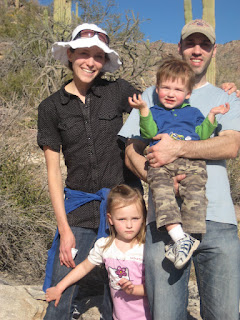