Tara took Aria and Zade to a party store to get their Halloween costumes.  Aria had been talking about being a black cat for several months, and finally got her wish: 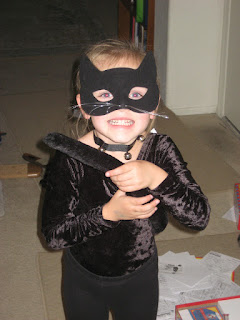 Zade, after searching the store endlessly, finally decided he wanted to be a pirate.  Fortunately, that long search paid off, because ever since, Zade has decided to wear his costume all day, every day.  Here's the fearless pirate. 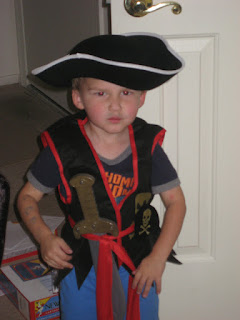 I WON'T SHARE
Earlier this week Aria and Zade were playing in the sand at the park.  I told Aria that she needed to share her shovel with Zade.  Aria said,"No, I won't share.  It's in my story.  'Aria will not share.'" She got this phrase from the PBS show "Super Readers," where the characters say they can't do things because the words in the story won't let them, and then the characters read those words to emphasize what they can't do. :)

GROWING UP
While I was putting Aria in the car, she looked at me and said, "I've finally figured out what I wan't to be when I grow up."
"What do you want to be?" I asked.
"I want to be just like you [mom]," she replied in a serious voice.  Now there's something to live up to.

SLEEP WALKING
One night after we put the kids to bed we heard a loud bang.  We went upstairs and found Aria curled up asleep on the green chair near her bed.  Next to her dresser was a huge wet spot about the size of a full sheet of paper!  For a girl who was potty trained at night since she was 2.5 years old, and has basically never had an accident, this was quite a surprise.  When we tried to change her underwear, she was still too incoherent to realize what had happened.  She must've been sleep walking. We asked her the next morning about what happened, and she thought we were lying to her, since she had no memory of it happening.

PLAYGROUP
For playgroup this week we went to Sabino Canyon. We walked up the canyon for a little over a mile and then settled down by the river to play. Here's Aria with her friends Daphne (center) and Harmony (left). 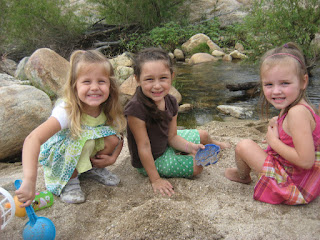 Aria took a picture of me with my friends: Sarah (Daphne's mom) (center) and Gretchen (Harmony's mom)(left). 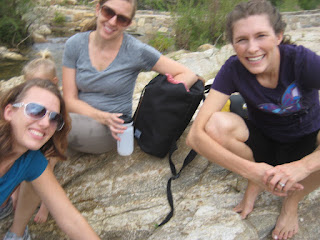 As the morning wore on, Aria had to go potty, so she stripped down behind a rock.  After she finished, she decided that she didn't want to get dressed again.  Later, when I accidentally dropped her underwear in the river, she and Daphne just went without clothes for the rest of morning.  They especially liked to cover their bodies with sand and then lay down flat in the river to wash it off. 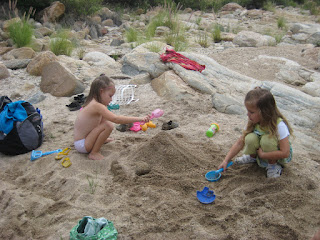 On Friday I took the kids to the zoo.  The weather was perfect- probably in the 70's with a slight breeze.  Aria and Zade had fun following the birds around in an enclosed aviary, and then Aria crawled inside this pretend egg and asked me to take her picture. 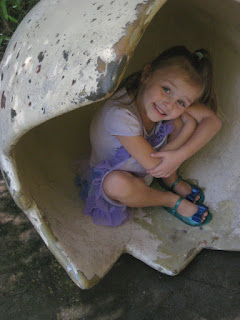 A squirrel came out and began circling the stroller.  It came right up to our feet and hands, hoping that we might offer a morsel. 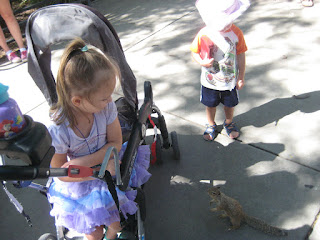 It was a lovely afternoon last Sunday, so we decided to go for a walk as a family.  So we pulled out the double jogging stroller and the kids hopped in.  We hadn't gotten very far when we looked up at the sky ahead of us and saw how dark it looked.  Then, as if we were in a Hollywood movie, we saw a spot in the sky start dumping rain right in front of us.  We turned around and started to run for home and the rain came right after us, chasing us back to our house.  Luckily we made it back to the house, and ran inside.

That would've been a nice close call, but we foolishly decided that we could still go for our walk if we just grabbed our umbrellas.  So we grabbed the monster umbrella for us and a small one for the kids and headed back out.  For the first few minutes the umbrella was able to keep the rain off us, but then mother nature kicked it into over drive.  It started raining so hard that the kids ditched their umbrella, pulled down the covers on the stroller and began screaming bloody murder as water began pooling at their feet.  Tara and I ended up getting the worst of it, and our clothes totally soaked through up past the waist.  It only took us 5 minutes to walk home in the flooded streets, but man, what a mini adventure.

This picture doesn't really do justice to how hard it was raining, but you can start to see how the streets were flooding after only 5 minutes.  Tara and I had a good laugh through the whole thing. 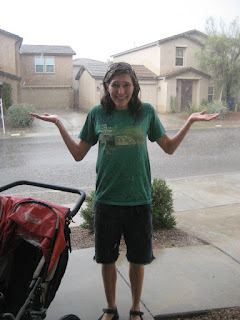 Aria recently has gotten into cleaning, which sounds fabulous, but unfortunately her favorite things to clean are dishes that are already clean.  She especially likes to use an exorbitant amount of soap, and if she had her way, she would definitely use windex on all the dishes as well. 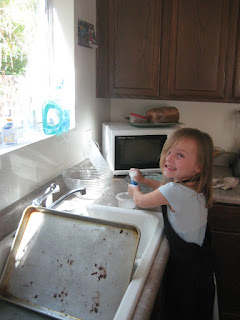 Now that Zade is back from Utah, he's found Aria's little purple hat.  He wears it everywhere and puts up a stink if we try and take it away.  Tara took him to the store to try and let him pick out a different hat, but none were good enough for him (sigh).  Zade also has a knack for finding random things and claiming them as his precious possessions.  His favorite one this week was a bottle of Elmer's glue, which he wanted to cuddle with in bed.  Here he is with his trusty, oh so sanitary plunger. 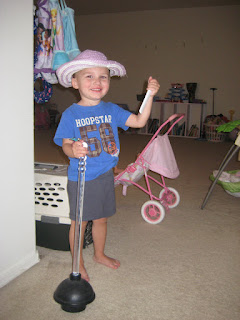 Since I have been so busy working on my dissertation, Tara's having to carry the heavy load of taking care of the kids.  So she's been taking them to all sorts of places, like the Children's Museum.  I take about a half hour each night to play with the kids (i.e. let them maul me.) 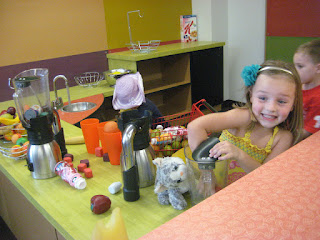 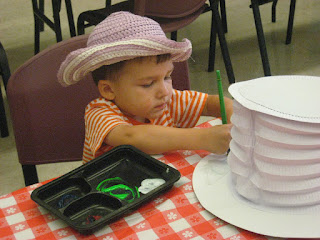 Last night, Aria decided she wanted to be Rapunzel, but her hair wasn't long enough.  Thus, she added hair extensions using a roll of toilet paper.  Before we knew it, she'd basically TP'd the living room. 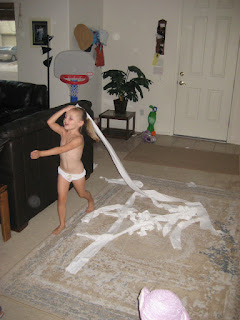 Zade was Flynn Rider and was trying to cut her hair with a wooden spoon. 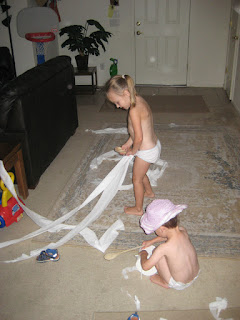 (I'm not kidding about the purple hat.  See, it's in most of the pictures in this post if you look carefully)
Posted by Dane & Tara at 2:18 PM No comments: