Kids and their Quirks

Aria and Zade got into the Christmas decorations in the garage and before we knew what had happened, they were running around the house with.... the Christmas mouse.  They love it!  It sings "Here comes Santa Claus" in what I find to be the most annoying voice.  Aria likes to put it up right next to my ear because she loves to see the grimaces it evokes from me.  I've threatened to decapitate the mouse, but that doesn't seem to stop her.  Here you can see its little face all lit up as its singing.  We had to take this picture to capture how Aria can take even the least likely environment and turn it into a play room. 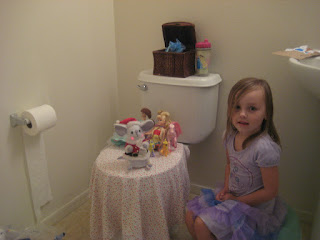 Zade has now picked some new favorite items.  He found one of Aria's hats and has claimed it as his own.  Whenever he has it on, I call him Cowboy, to which he responds, "I not cowboy, I Zade".  It's cute.  He also loves carrying around this Thomas the Train bag, which he fills with little trinkets.  He'll put up a stink if he doesn't have the hat and bag, even when he goes to bed.  He's a silly little guy.  We also just introduced the kids to He-Man and She-Ra on Hulu.com.  They're hooked.  :)  It's fun to see them get into shows we used to watch as kids. 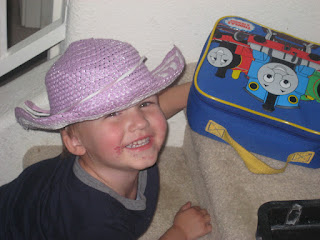 Here's Tara's account of an interesting experience she's had this week:

I agreed to watch my friends two girls, Karen and Cerise, ages 4 and 2, while she and her husband went to the temple in Mesa.  As the drive to the temple from Tucson is two hours, the entire trip took about 7 1/2 hours.  Unfortunately, Aria was being rather mean spirited to Karen.  Recently, Aria has picked up a few negative behaviors such as sticking out her tongue, spitting and hitting. In addition to this, she will say unkind things to her friends, such as "I think your picture looks terrible!"  Karen can be a little stubborn as well, and the two girls couldn't seem to get a long for more than 5 seconds.  I was also having trouble getting the two year old to nap.  She threw a fit, and I didn't want to leave her in the room screaming.  I tried to get her to lay down, but she refused.  I laid down next to her on the bed and she finally fell asleep sitting up because she refused to lay down.

By 5:00 o'clock I had really had it, and Aria had lost t.v. and treat privileges for an entire week.  The last straw was when I went to pick up Aria to comfort her and she somehow jumped up and hit my chin with her head so hard that it caused me to slice my tongue with my teeth.  I collapsed into a corner in the kitchen, sobbing.  Aria and Zade were quick to offer comfort and concern, but it was only when Dane walked in the door at 5:15 that I could finally go to my room, lock the door, jump into bed and stare at the wall in an emotional stupor.

The peace did not last long though because there is no punishment so great for Aria as having mommy lock herself in her room.  She immediately began pounding on the door.  "Mommy let me in! Mommy I love you!  Mommy I want cuddles! Please Mommy!"  I ignored her of course, feeling this was good punishment.  I could hear her on the floor by the door.  "Mommy, why won't you let me in? Please let me in!"  This went on for at least 15-20 minutes, even while the other kids played happily around her.  Finally, I felt punishment had been paid, and I opened the door and unlocked myself.  I jumped back into bed and Aria jumped in with me.  I wrapped my arms tightly around her and she snuggled in close to me.  "I love you Mommy."  We talked about the days events and how she needed to be a kinder person.

The next two hours, Aria, Karen, Zade and Cerise played happily, running around upstairs like wild monkeys.  Aria was much better behaved.  At bedtime I cuddled close to her, and told her that I was glad she was so much nicer to her brother and her friends.  She wrapped her arm around me, pulling me in till our noses almost touched, and smiled, staring at me with her bright blue eyes, until they began to get heavy and she fell asleep.

It's amazing how many emotions one can feel in a single day of parenting.

Eating candy off the ground

Aria's current best friend is named Daphne.  They went swimming together at the pool in Daphne's apartment complex.  Aria is becoming a confident swimmer as long as 1) she has her trusty floaties on, and 2) mommy is close by.  Zade is also getting a lot more comfortable in the water and will jump to me in the water. 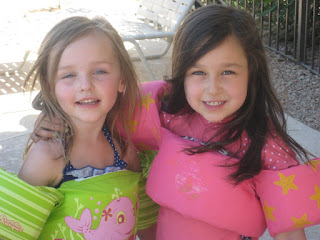 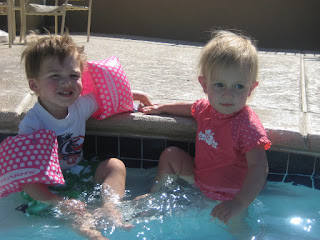 Unfortunately the happy looks in these photos didn't last.  Zade picked up a piece of candy while we were walking through a parking lot and started eating it.  We told him to spit it out, but he refused.  Apparently is was too delicious.  We warned him that he'd probably get sick, and lo and behold, shortly thereafter he got sick.  That may simply have been a coincidence, but either way, he ended up with an ear infection and pink eye.  It was so bad that when he woke up in the morning, his eyes were swollen and glued shut.  At the same time Aria came down with a virus, which knocked out her energy, and shortly thereafter she contracted pink eye.  After getting medicine from the doctor, plenty of sleep, and an exorbitant amount of cartoons, they're both doing much better.
Posted by Dane & Tara at 4:14 PM 1 comment:

Zade continues to get into everything, and has recently become quite fond of running off with Tara's make up.  When he wakes up from his nap, he now immediately asks "where's my make up?"  He's particularly fond of Tara's blush and its accompanying brush.
Posted by Dane & Tara at 4:51 PM 1 comment: