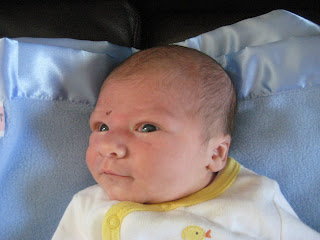 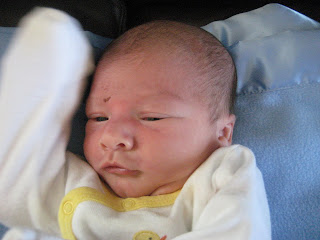 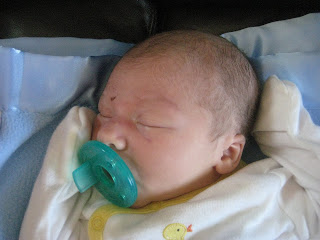 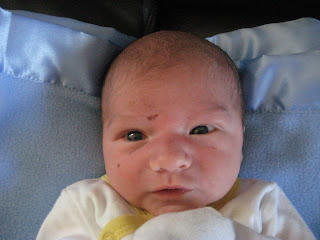 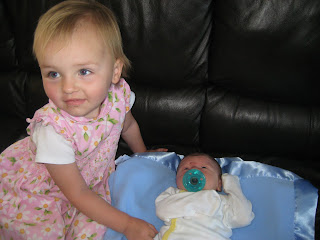 Tara's parents came down for Zade's birth and have been helping keep the adventures coming for little Aria. Here's the crew on a hike at Bear Canyon: 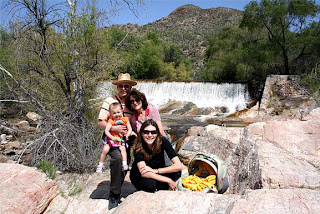 Here's the playset for the backyard that they gave Aria for her birthday: 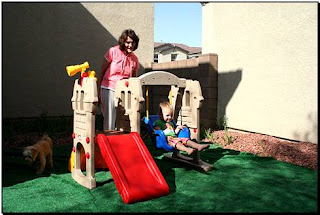 Here's Jerry with his grandkids: 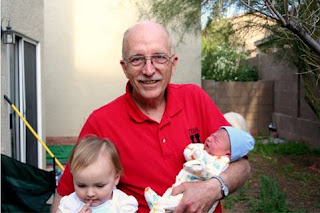 Tara's parents brought their little dog Milo with them when they came to visit, and Aria has gotten a kick out of taking him for walks around the house. 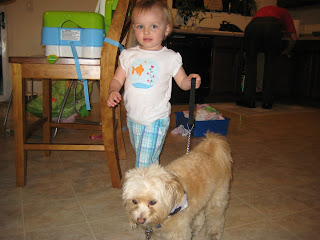 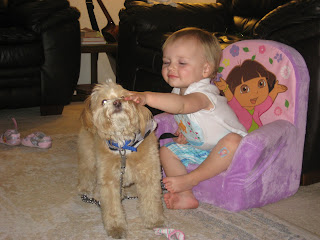 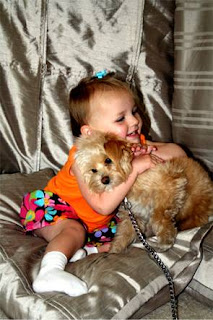 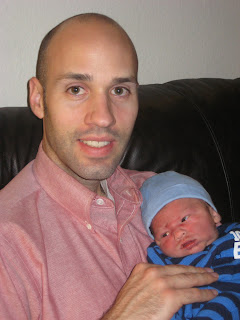 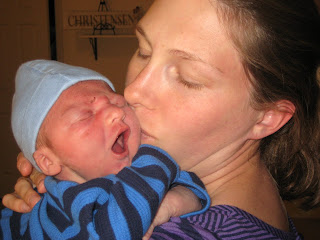 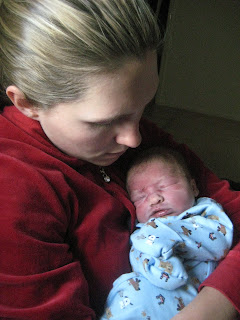 Little Zade has arrived! He was born 1 week early weighing 7 pounds, 6 ounces, and measuring 20 inches long. He came after 10 hours of labor in the hospital, and within 48 hours of birth, both he and Tara were doing well enough to come home. Zade is so sweet and good tempered. We feel quite blessed to have him in our family.

For those who would like to know the details of his arrival, read on. Tara had her weekly check up with the doctor and found out she was already 4 cm dilated. By 9pm that night the contractions were strong enough that we put Aria to bed, and Tara's friend Jennifer came over to spend the night and babysit while we went to the hospital.

We arrived at the hospital at around 10pm and Tara's contractions began to slow down, which was a little disappointing for Tara. She tried walking around the labor and delivery area with her nurse, while pulling around her IV, but it didn't help the contractions pick up. Rather than get any pitocin (which Tara wasn't too fond of because of how powerful and painful it made her contractions when Aria was born) she instead just had the doctor break her water and fortunately the contractions increased significantly.

Tara thought she might try the "natural" child birth approach (i.e. no pain meds), as it seemed a more noble way to give birth (though Dane didn't see the logic), but after about an hour when the pain became excruciating, she came to her senses and got the epidural. She liked this epidural more than the one she'd received with Aria, since that one caused one of her legs to be temporarily paralyzed, whereas this one just took away the pain, but left her so she could still feel what was going on.

Active labor started at 6am and probably would've been over within 30 minutes, except little Zade ended up not coming the conventional way. Typically baby's come with the back of their head first, (i.e with their chins tucked against their chest.) He decided to do the opposite. He tipped his head back, so he came out face first. The main disadvantage of this approach is that his little face took all the friction on the way out, and actually added friction, causing the labor to take longer. The result was a very, very swollen face that literally was bright purple, with the rest of his body coming out a pasty white.

The doctors were worried the swelling might constrict his airways or hamper his ability to eat, so they took him to the NICU right after birth. However, despite how banged up he looked, he had no trouble eating or breathing, so that evening he and Tara were given their own room, and the next evening they came home from the hospital. It's amazing how quickly Zade's face has been recovering. Now that his features are beginning to come through, he seems to look a lot like Aria did at that age. 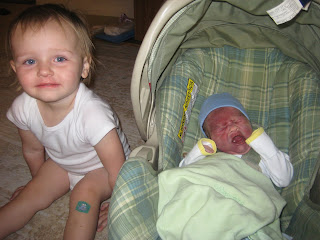 Adventures of a pregnant lady

Tara is now 38 weeks pregnant with a modestly large tummy... but leave it to her to not let that stop her from going out and having fun. As you can see in the picture, even though little Zade is so close to Aria that he can practically kick her in the head, we still went for a family bike ride. 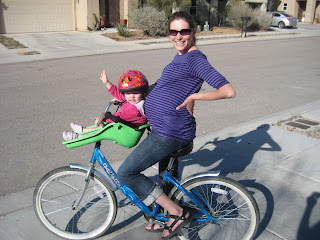 We also had dinner in the park and let Aria play on the slide. For the longest time she was too scared to go down the slide by herself, until she saw other kids going down on their tummies. After a lot of coaxing, she finally gave it a try. Once she realized the slide was not going to lead to severe mortal injury, she became utterly obsessed with it and now goes down backwards on her tummy over and over again. So now we have the opposite problem and can't get her to stop. 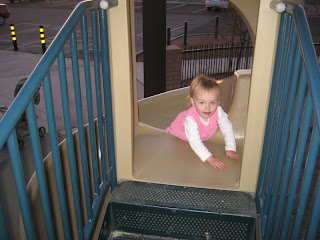 Here are a couple more shots from the park: 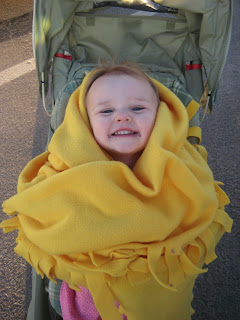 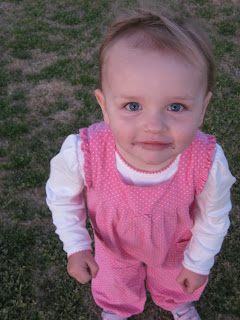 We went with the Maulers to watch the UA gymnastics team compete against UW. We couldn't believe how sparsely attended it was. Even in Corvallis, a town 1/20th this size, the attendance at an OSU gymnastics meet would've been probably 4x what we saw here. Anyway, as you can see in the pictures below, Aria got into the pre-game show on the jumbotron and into all the dance music throughout the event. We got a couple pics of her clapping to the beat. And to top it all off, the UA came from behind to win. So we had a good time. 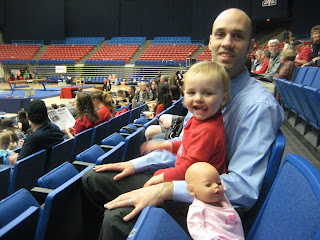 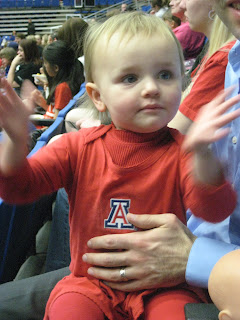 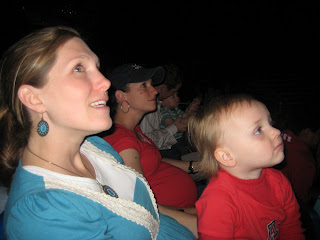 Aria was almost ready to head out to the store with her mom, but realized she was missing a few accessories, so she put on this cute little outfit. And to top it all off, she added her patented fake smile, upon mom's request for the picture. 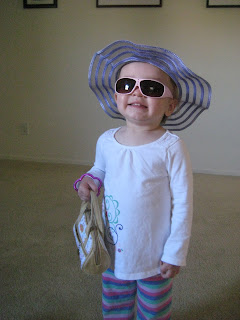 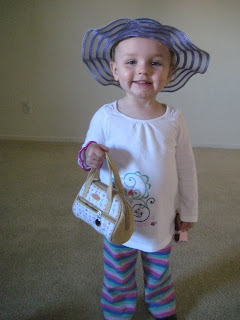 For family home evening this week we made cookies. Aria really liked helping mix the batter and was instructed in the fine art of beater licking afterwards. 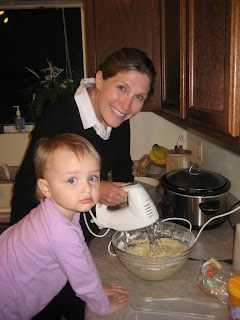 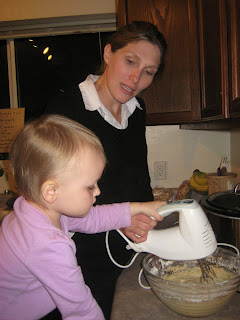 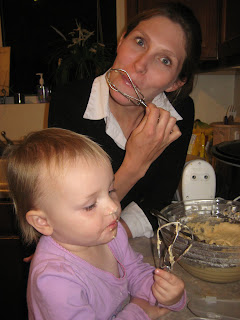