Big Z logs another lap around the sun

This week we began our family celebration season.  Zade kicked things off by reaching the mighty milestone of five. He watched a Wild Kratts show a few weeks ago on sharks and ever since, he's wanted to know everything there is to know about them.  So for his big day, Tara made it shark themed. :)  Zade awoke to little chocolate coins going from his bed downstairs to a table that was totally decorated with shark paraphernalia.  Tara then shared highlights from each year of his young life.  After we sang to him, Zade then opened some presents, and as you can see, was particularly excited to receive some more Legos to play with. 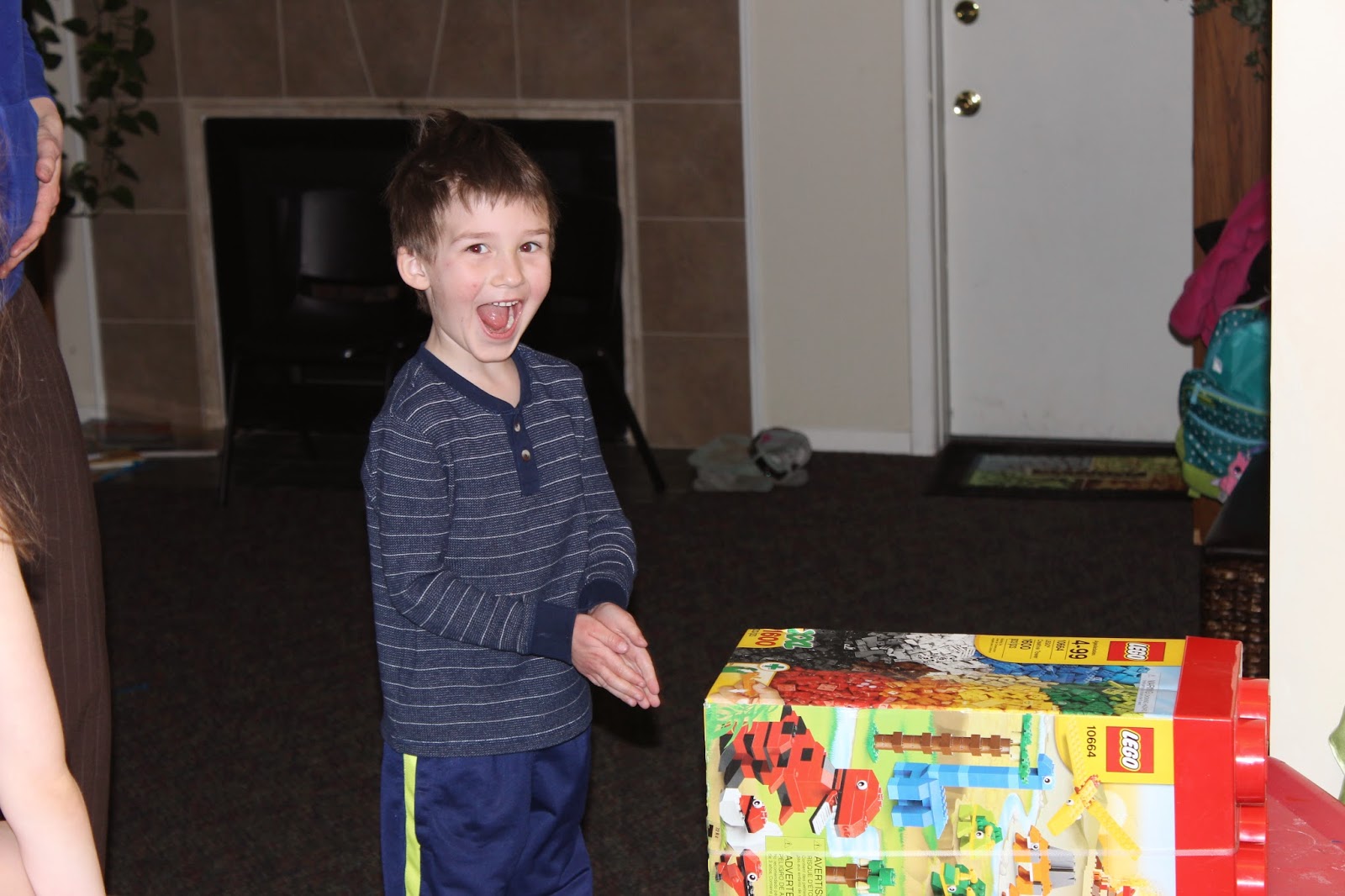 Then during the day Tara and Zade constructed a shark cake. 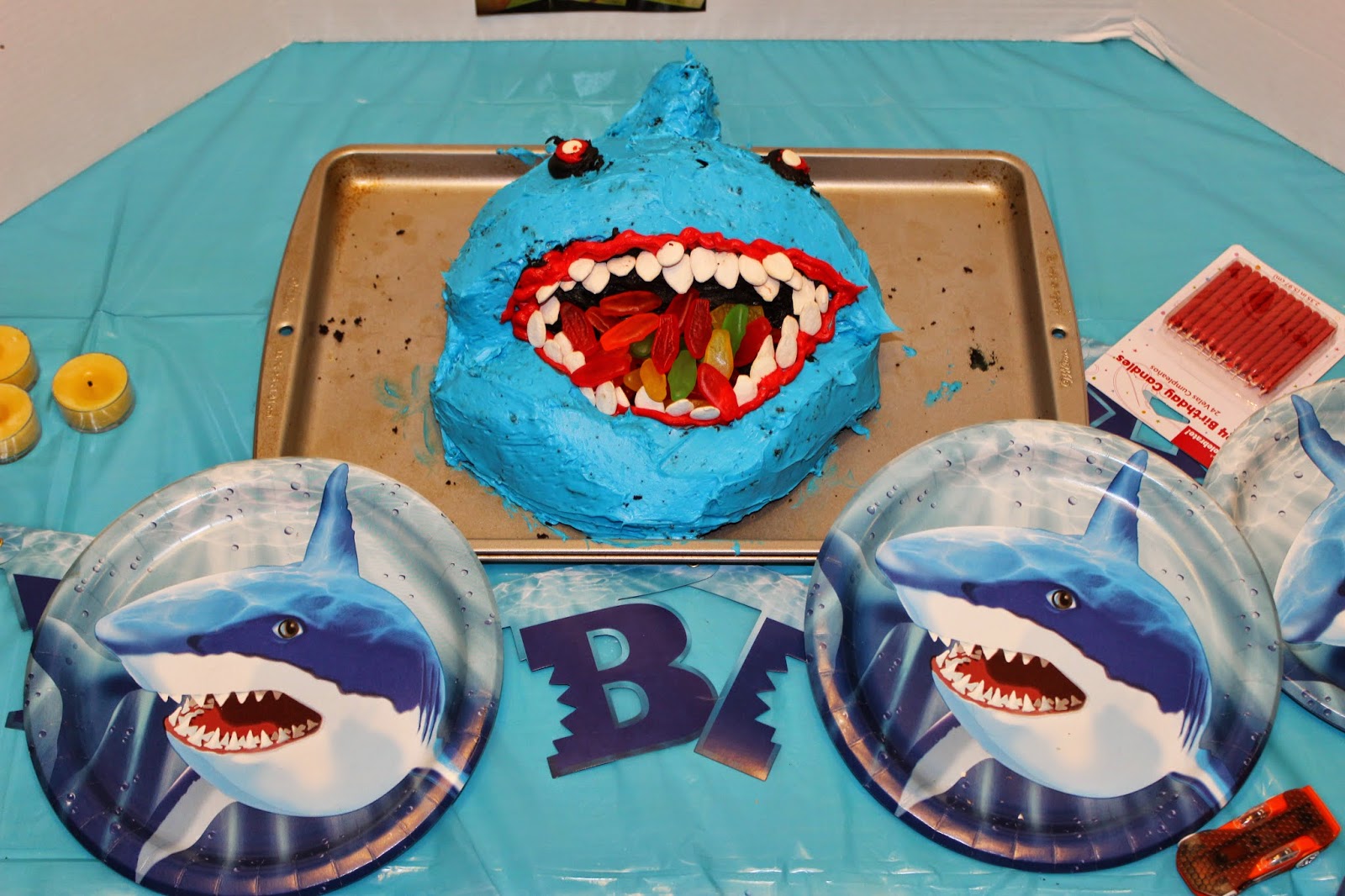 Here's a close up of it. I was quite impressed with how it turned out: 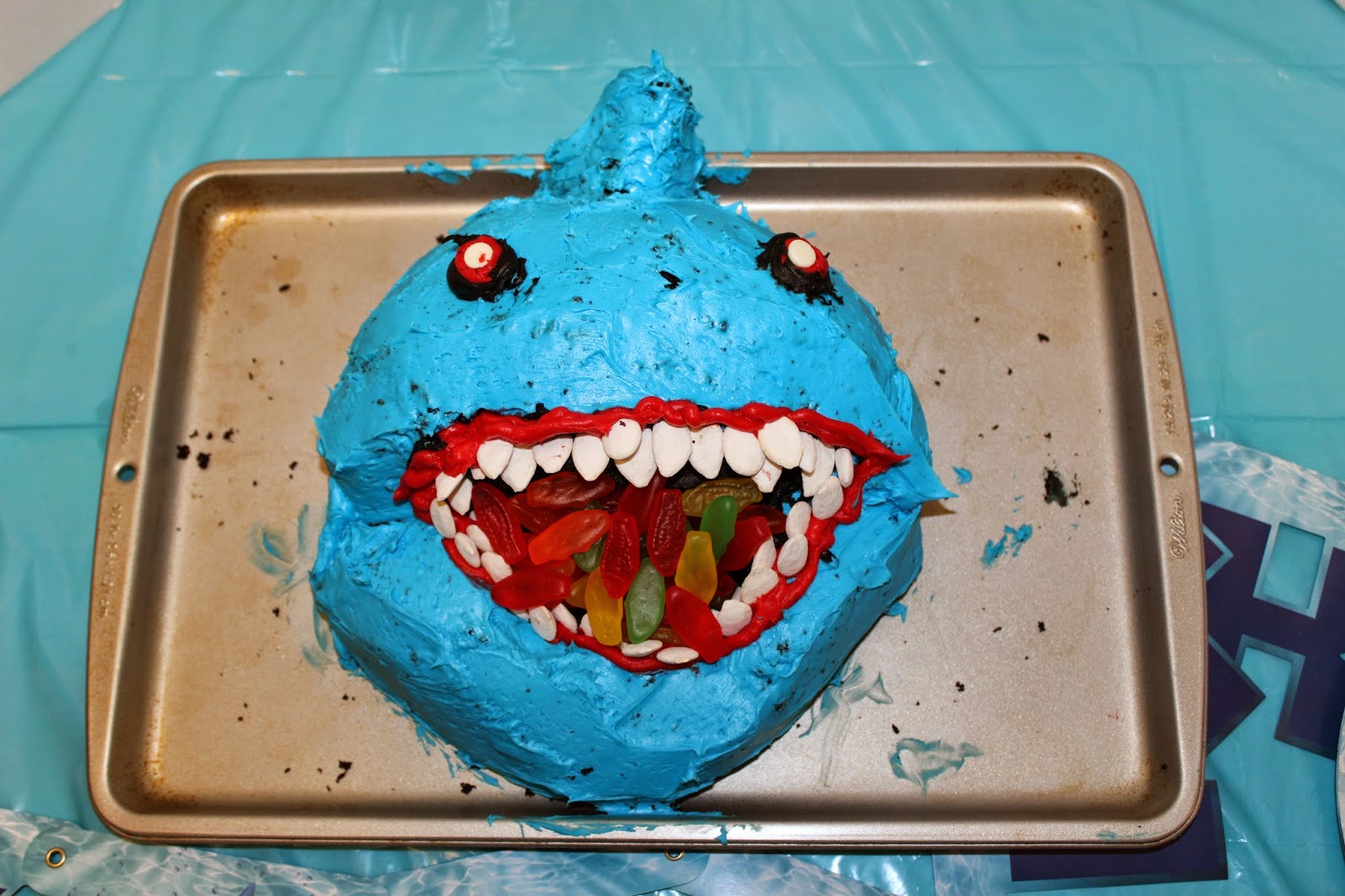 Zade invited over his friends Adam and Elaine Hendrichsen and they all went and played at Fun Unleashed for his party.  For presents, the Hendrichsen's gave him shark books.  Quite appropriate :) Afterwards we came back to our house for cake and ice cream. 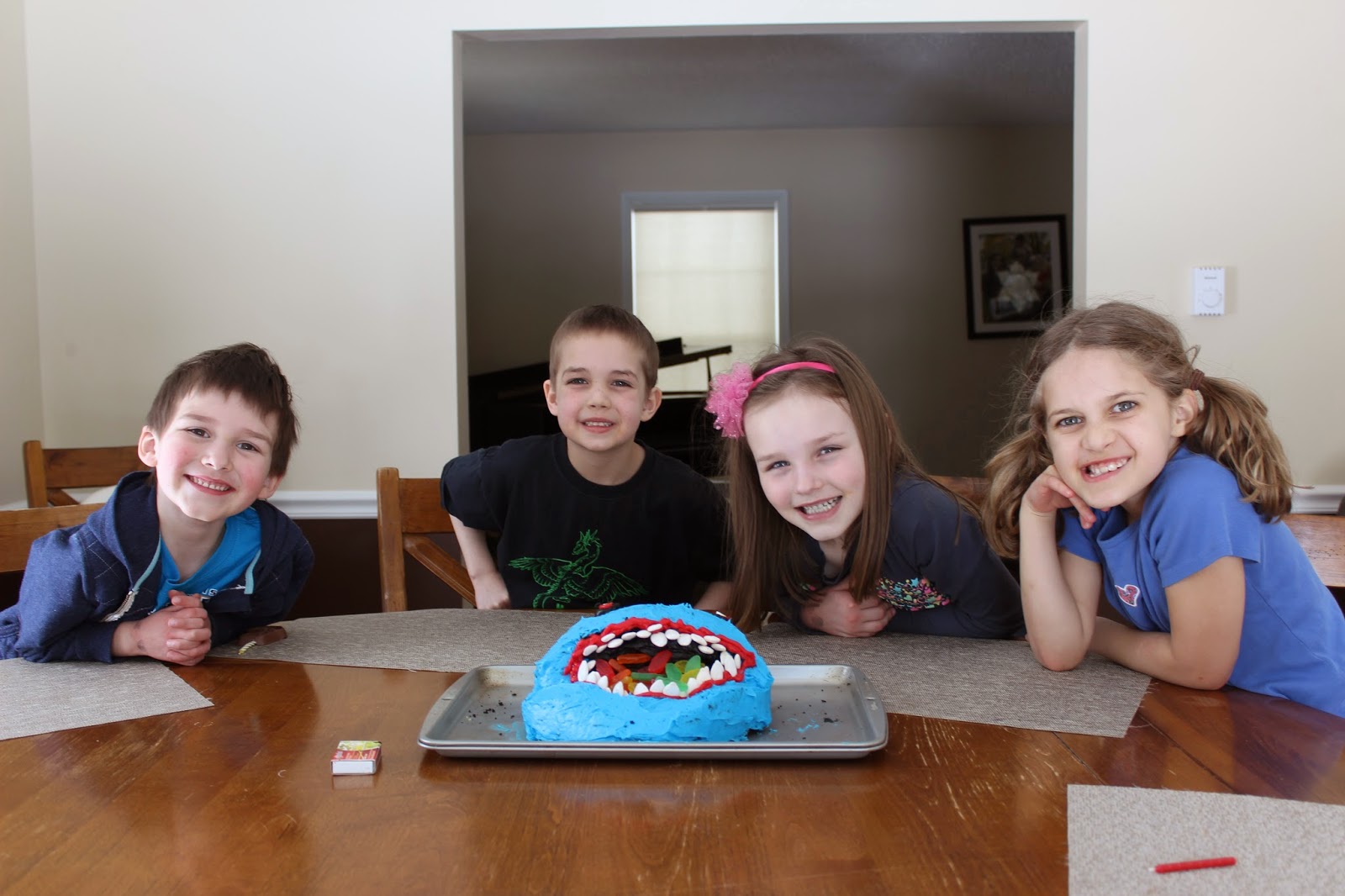 The kids had a great time.

While Zade had a pretty good week, Ryzen and I didn't have quite as good of a time.  Ryzen got a bad ear infection and his temperature shot up above 104.  We had to take him to urgent care.  We got him on some medicine and he's doing better. I got a bad cold and a bunch of cankers, which has been frustrating. But it's just part of life.

The weather is getting better, although one day this week it dumped a bunch of snow. Fortunately it was 50 degrees the next day so I didn't have to plow the driveway.  Overall, not a bad week.  :)
Posted by Dane at 6:07 PM No comments:

It's been a busy couple of weeks. Since I'm the Stake Clerk in our church, I've been busy with quite a few church meetings recently (e.g., bishop's welfare meeting, 7.5 hour disciplinary council, etc.), so it's been hard to find time to update the blog.

The kids have been chomping at the bit to have me get their bedroom ready.  Yesterday I was finally able to find time to finish painting their room and build their bunkbed.  With a new baby coming in June, we're trying to get things re-arranged so we can be ready when it comes. The kids are excited to have their room mostly ready. I still have to build the trundle bed that Ryzen will sleep on, but we're getting closer. 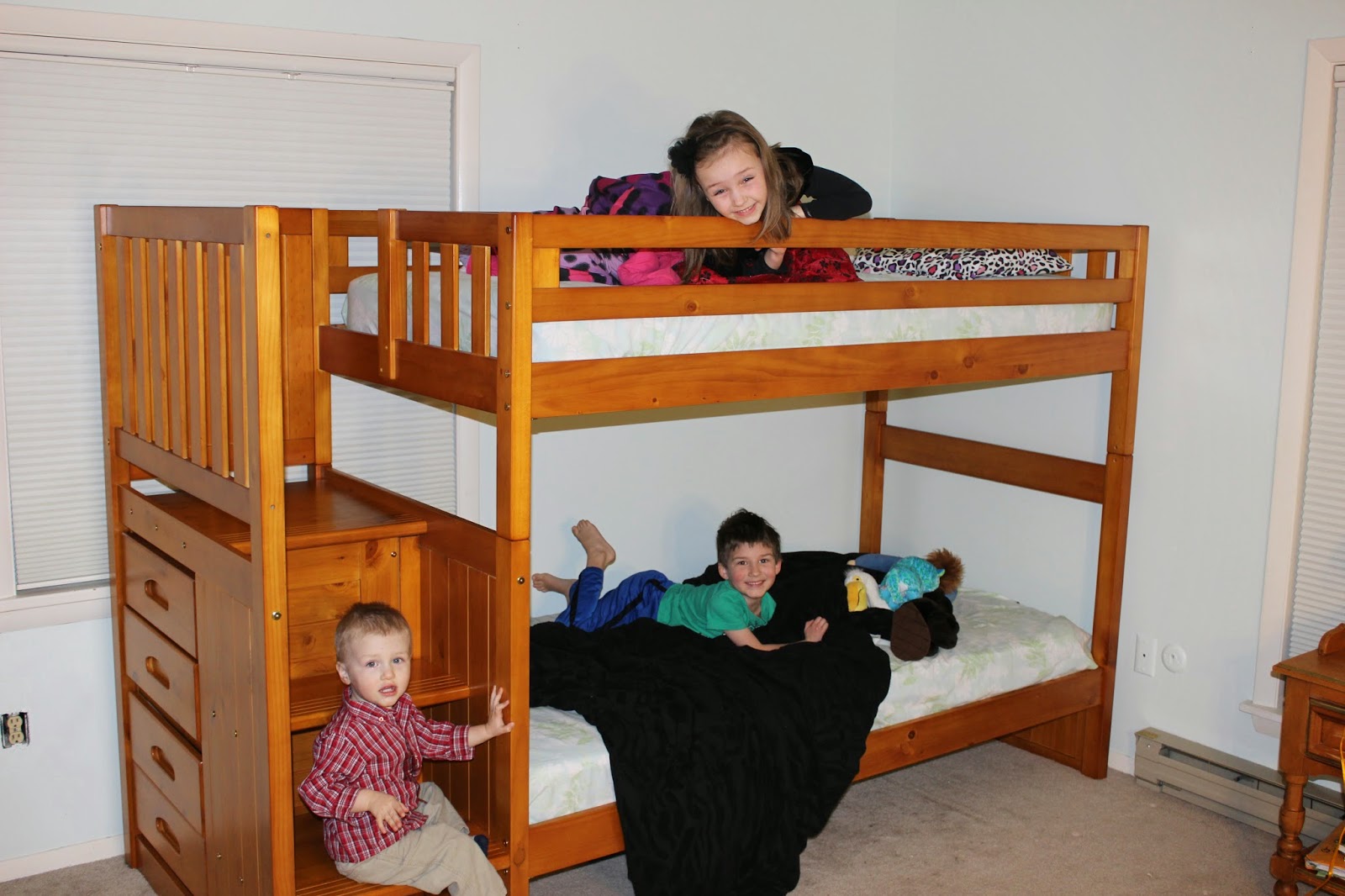 I also thought it would be worth illustrating how quickly Ryzen's moods can change. He can go from sad to happy in 6 seconds. :) If you tell him Mommy is leaving, he'll start crying, but if you tell him she's staying, he'll snap right out of it. 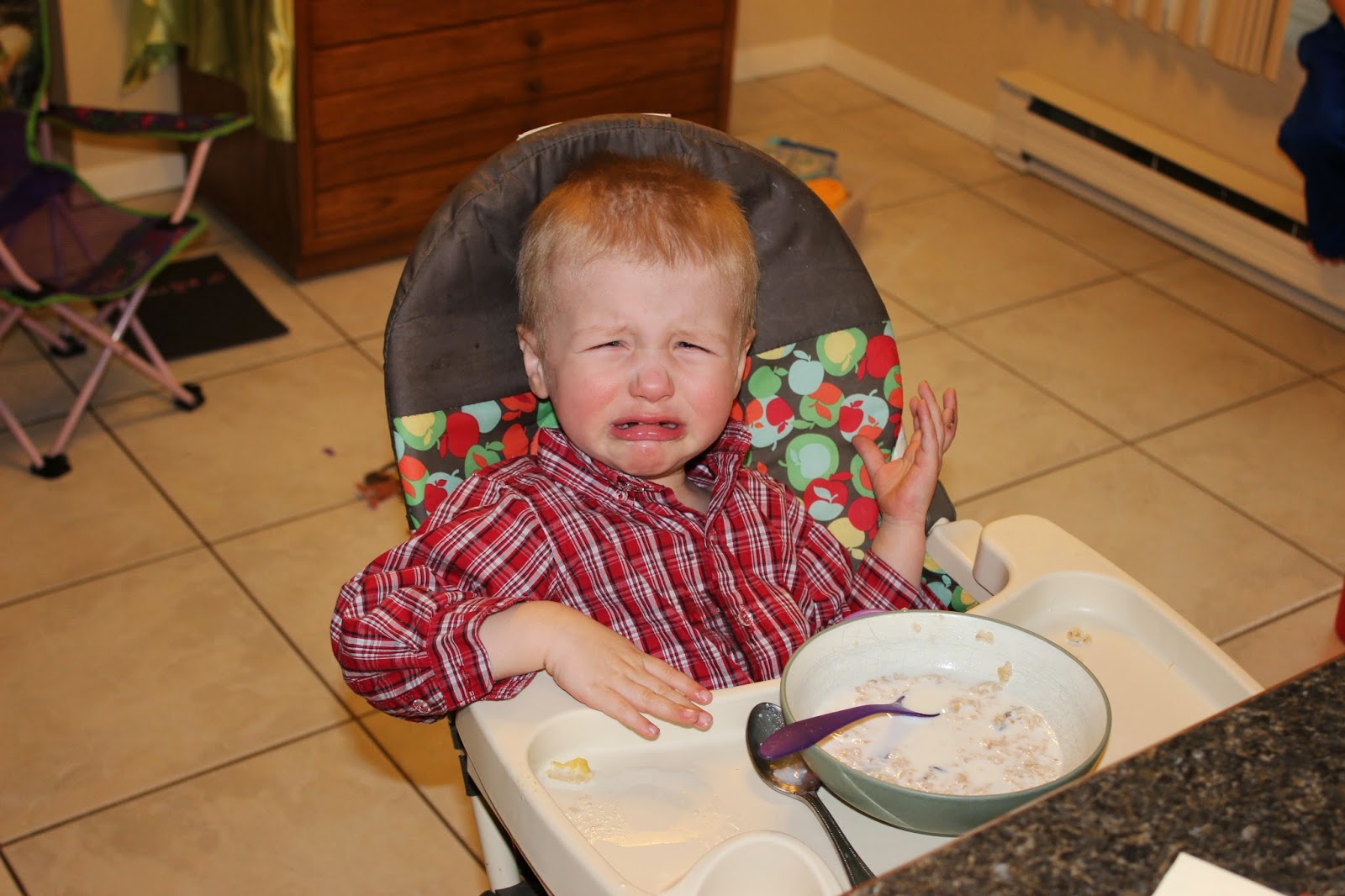 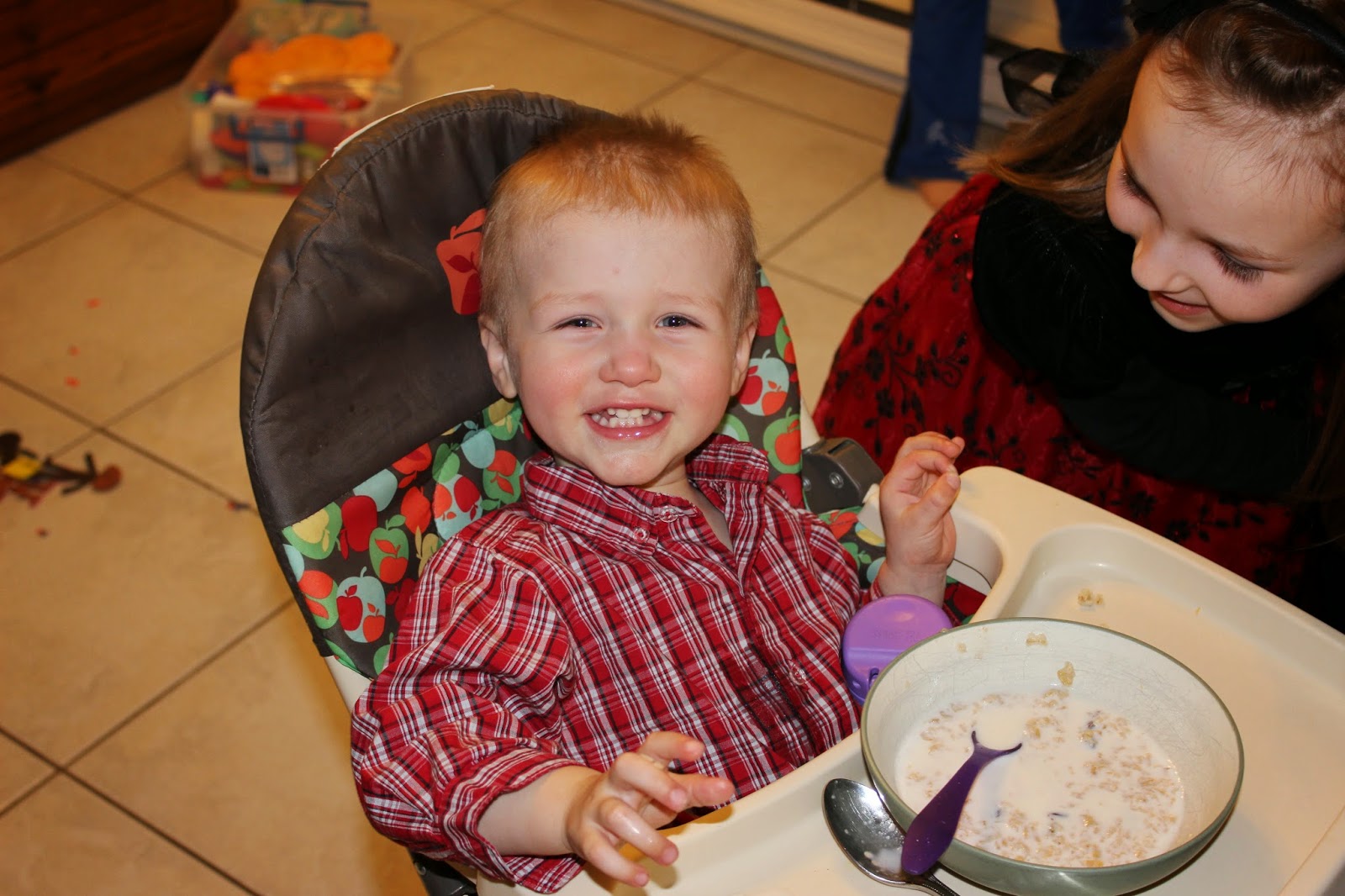 I guess the other good news this week is that for Spring Break, we were blessed with weather above freezing.  After the frigid winter we've had, which has included 4+ days with -10 degree (Fahrenheit) weather and 20 mph winds, it's nice to finally have some better weather.  We just stayed here in Pennsylvania for the break.  The kids had fun playing at home and I was able to get caught up on work.  (Since I'm teaching this semester, I was falling behind.)
Posted by Dane at 5:37 AM No comments: 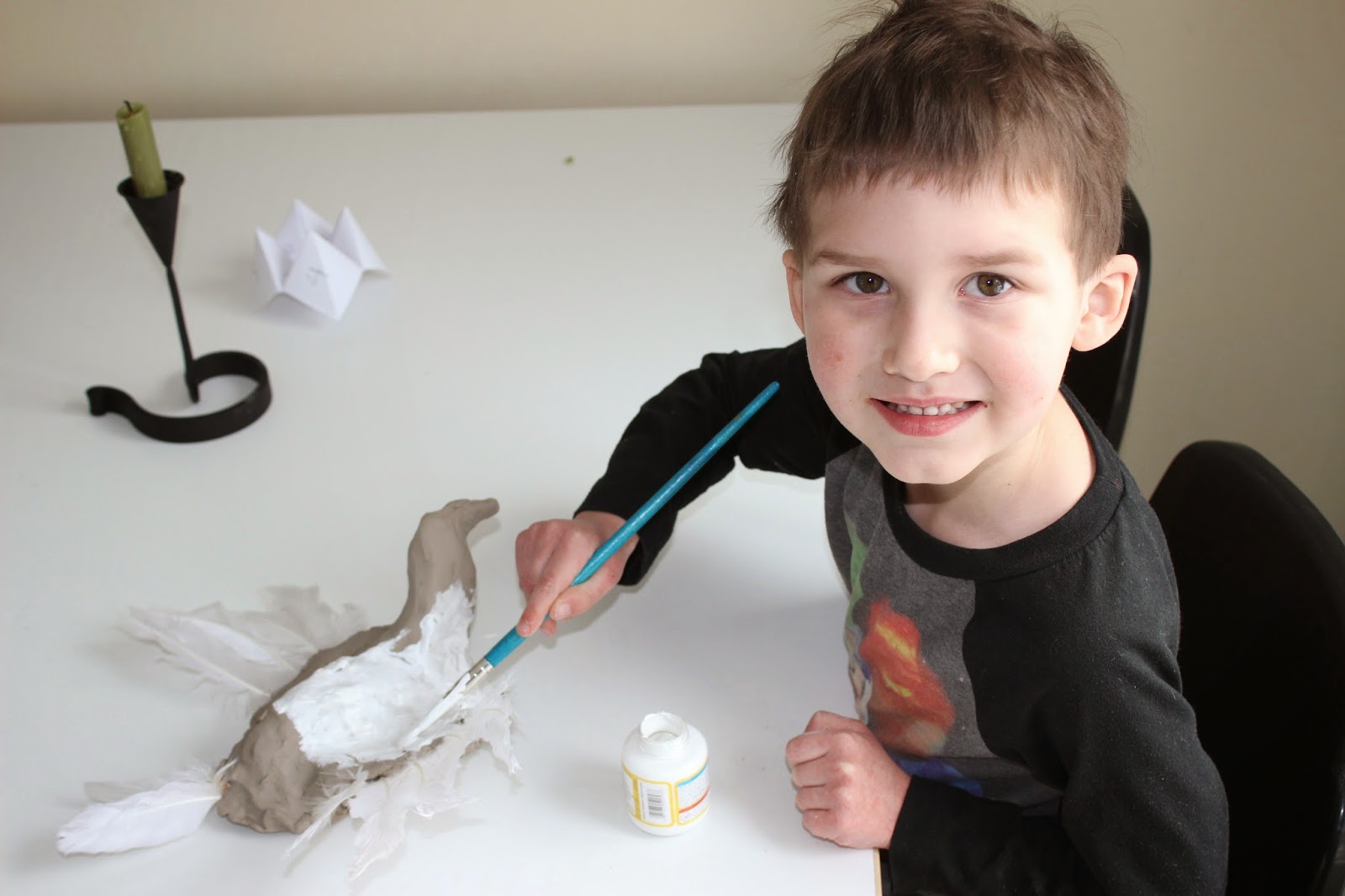 Zade and I have had fun trying to carry on some of the activities that we were doing during home-school with Aria.  Zade loved reading the story, "The Ugly Duckling."  He had me read it to him, over and over and over again.  Then we decided to make a swan out of clay.  Zade had the creative idea of adding feathers and painting it white.  The finished product looked very nice.  Currently I am trying to work on handwriting with Zade.  He has mastered most of his capital letters.  Waldorf philosophy teaches initial reading by having the children read their own writing.  After Zade masters all his letters, we will begin to write some sentences and practice sounding them out. 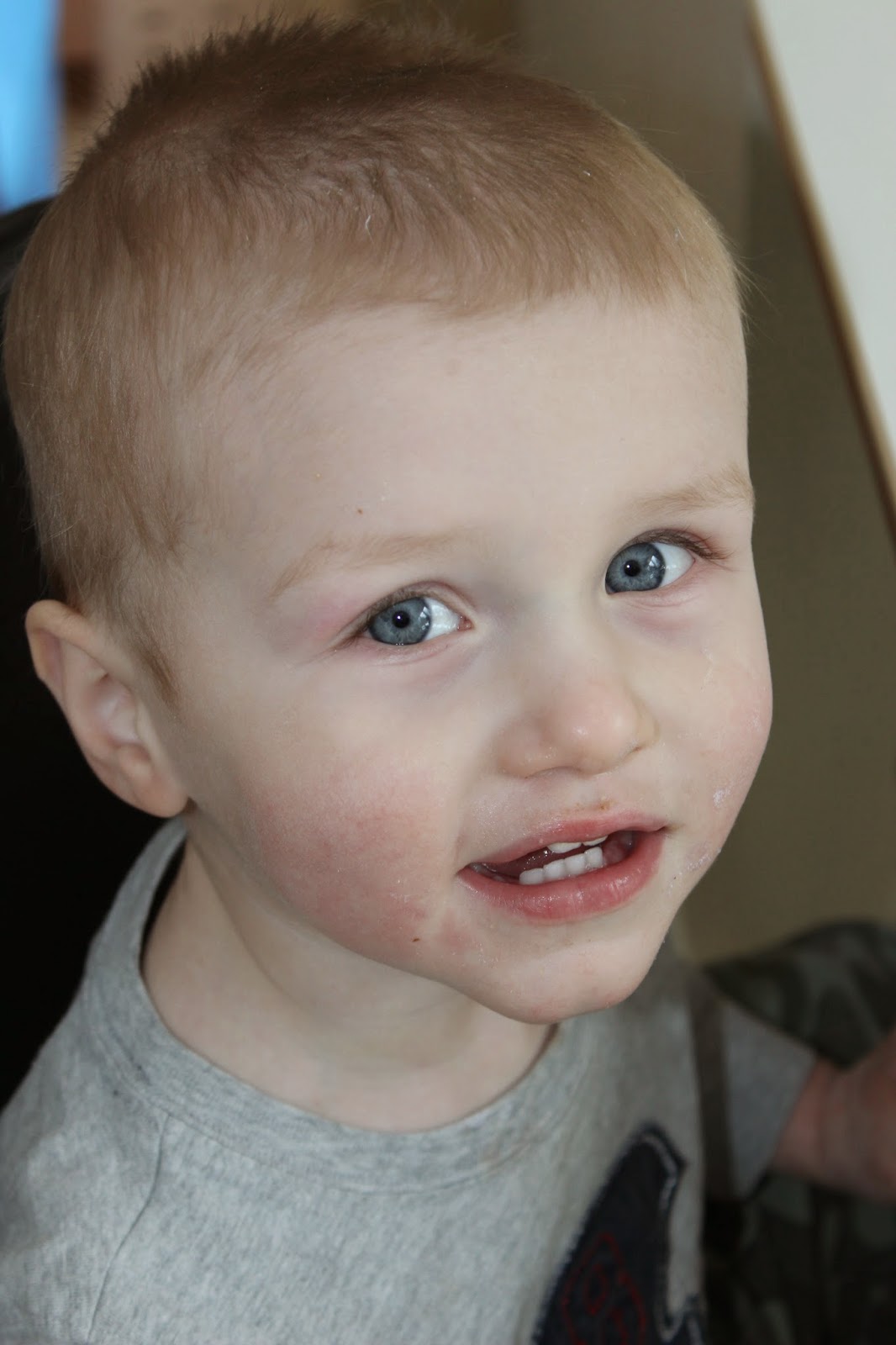 Ryzen loves getting his picture taken!  He always says, "Cheese," and then wants to see the picture on the camera.  He points to the picture of himself and says, "Baby!" 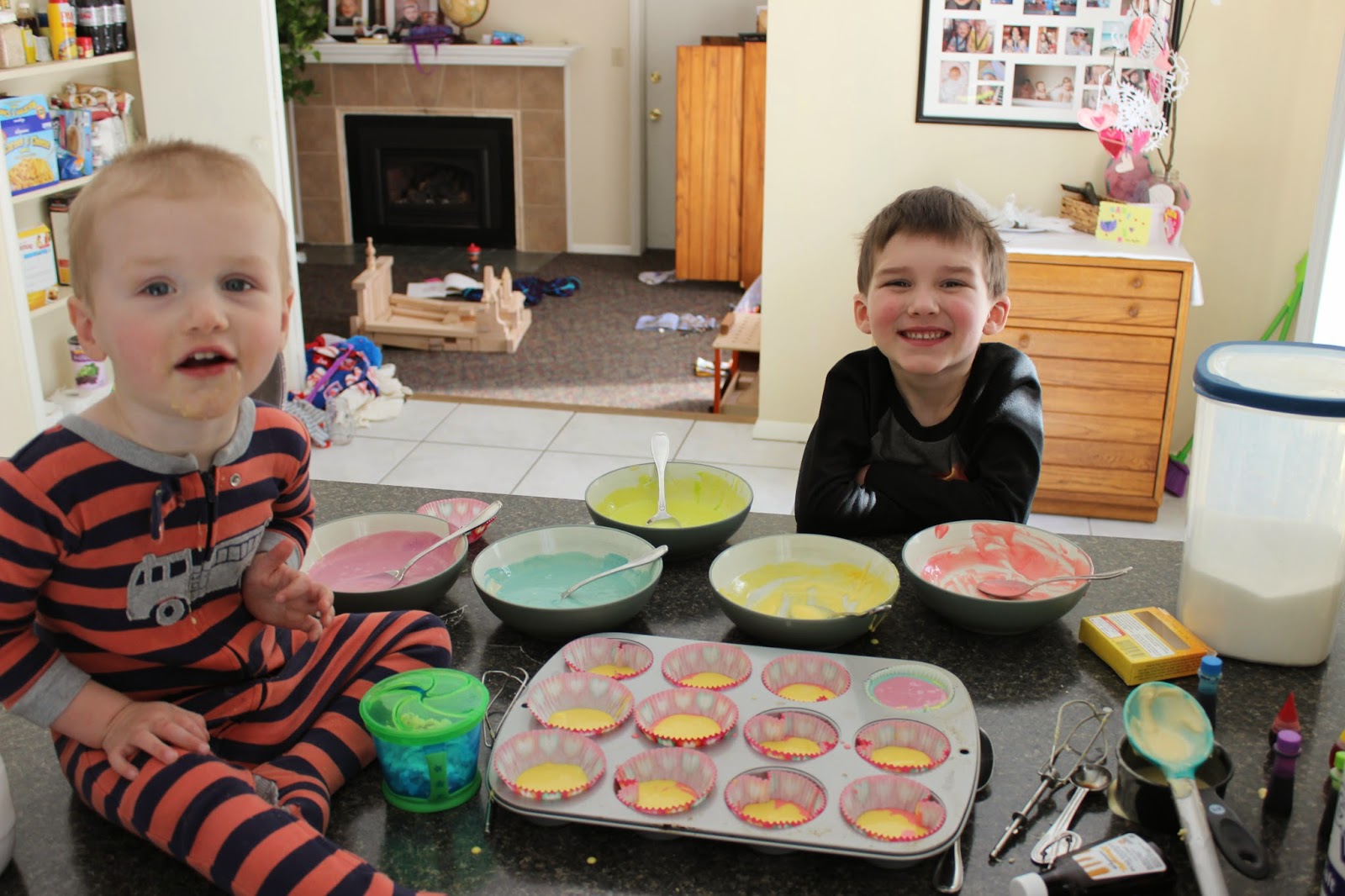 I joined a preschool co-cop for Zade through the church that he attends once a week. Zade enjoys going.  The little group, including Zade, has 3 boys and 1 girl.  We were in-charge of teaching last week and we had the letter "R."  Zade and I made "R"ainbow cupcakes did other fun activities with the group relating to the letter "R." 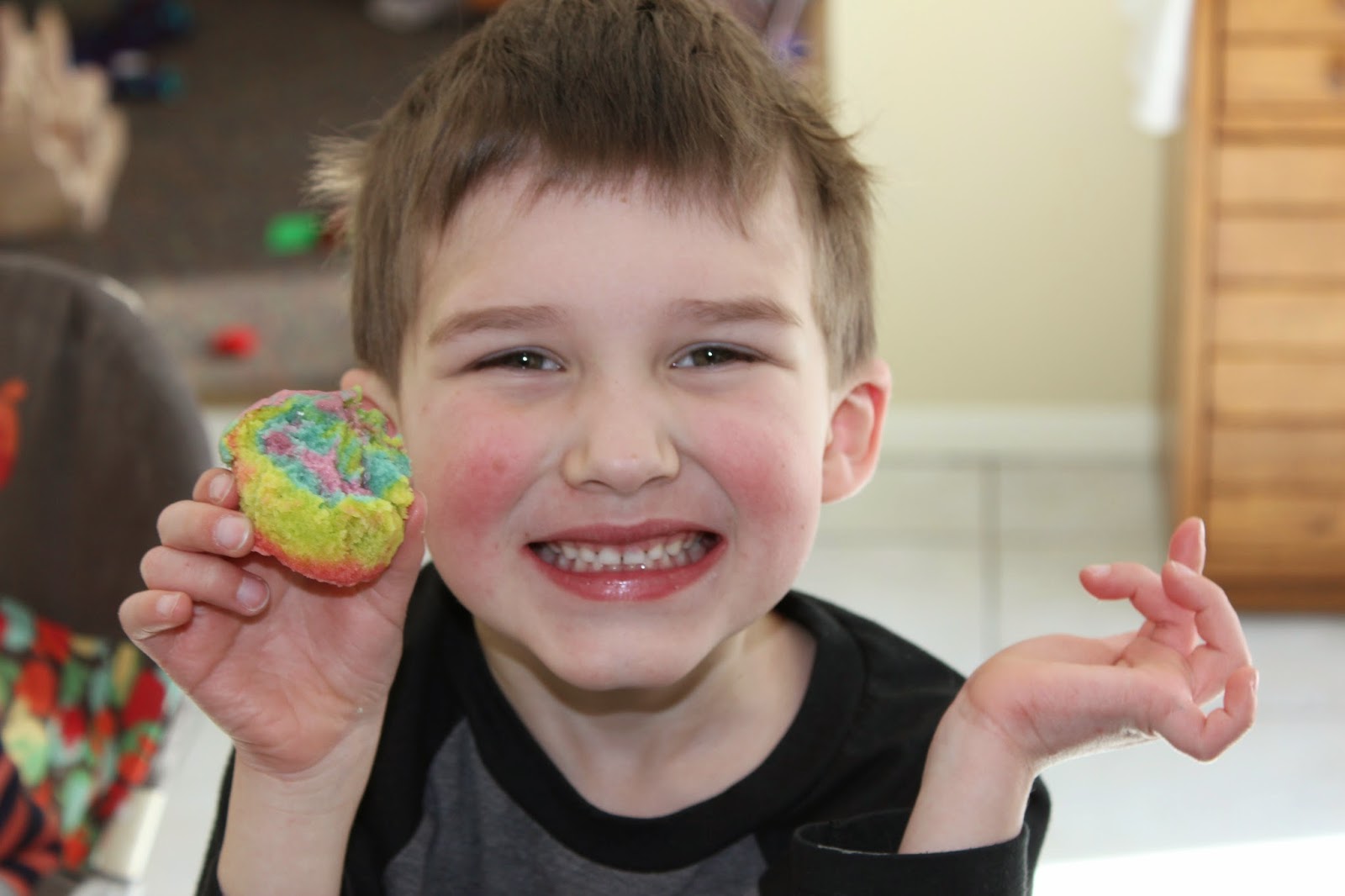 Aria has become a wonderful reader!  It's amazing how far she has come since the beginning of the year.  I remember I was worried because she didn't seem interested in reading and didn't want to read. I started writing the fairy stories for her, and her abilities really took off.  Recently my mom purchased her a series called "Heidi Heckelbeck" and Aria has already read all 4 chapter books!  She loves to read to her little brothers, and they love to listen to her!  Today she got up in church and read an entire paragraph from the scriptures.  I was impressed with her willingness to read on the spot in front of such a large group.

Aria continues to love to draw.  Whenever she is not occupied with a structured activity, we usually find her drawing.  She loves to draw pictures of girls, and has gotten very good at detailing faces. She also loves to write little stories, and continuously asks me how to spell words. Aria and Zade wrote and illustrated their own little story tonight after church.  The pictures had an interesting Picassso look (Zade's drawing technique) and it was so fun to see them working together.  I'm beginning to realize that so much learning happens for children when you just try to inspire them, but not push them.  They take their own initiative and they are much more motivated. 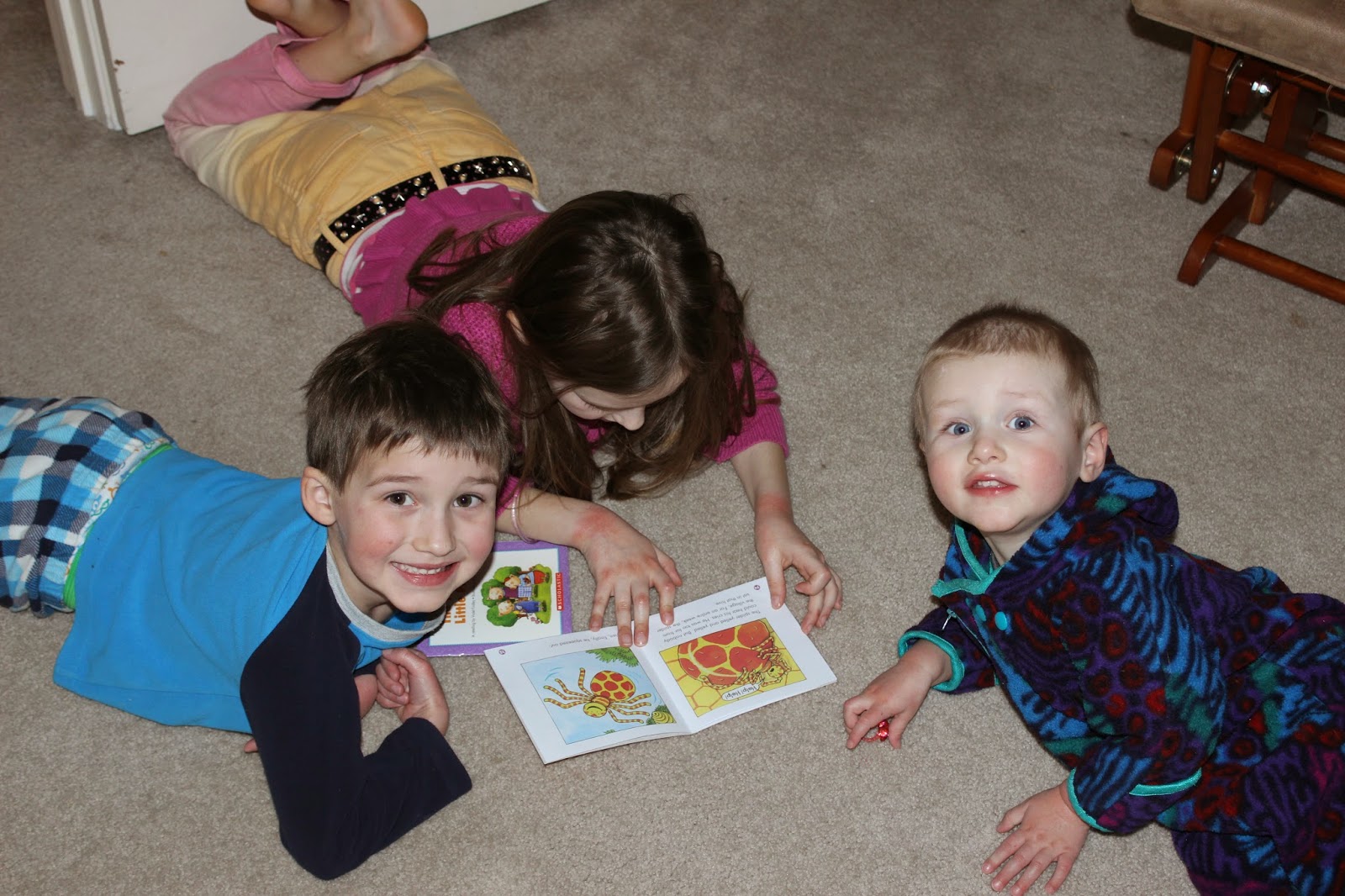 Zade, Ryzen and I continue to get together with our friends that we met through home-schooling.  My friend Katrina, located below, is very inspiring.  She home-schools her 11 year old daughter.  Katrina believes in living very simply and has taken the Waldorf method of schooling and living to heart.  I have learned a lot just being around Katrina.  She invited us over to her house last week and the kids made beeswax candles.  They walked around in a circle while the wax dried each time, and the mothers sang a lovely song about making candles.  It was a lot of fun! 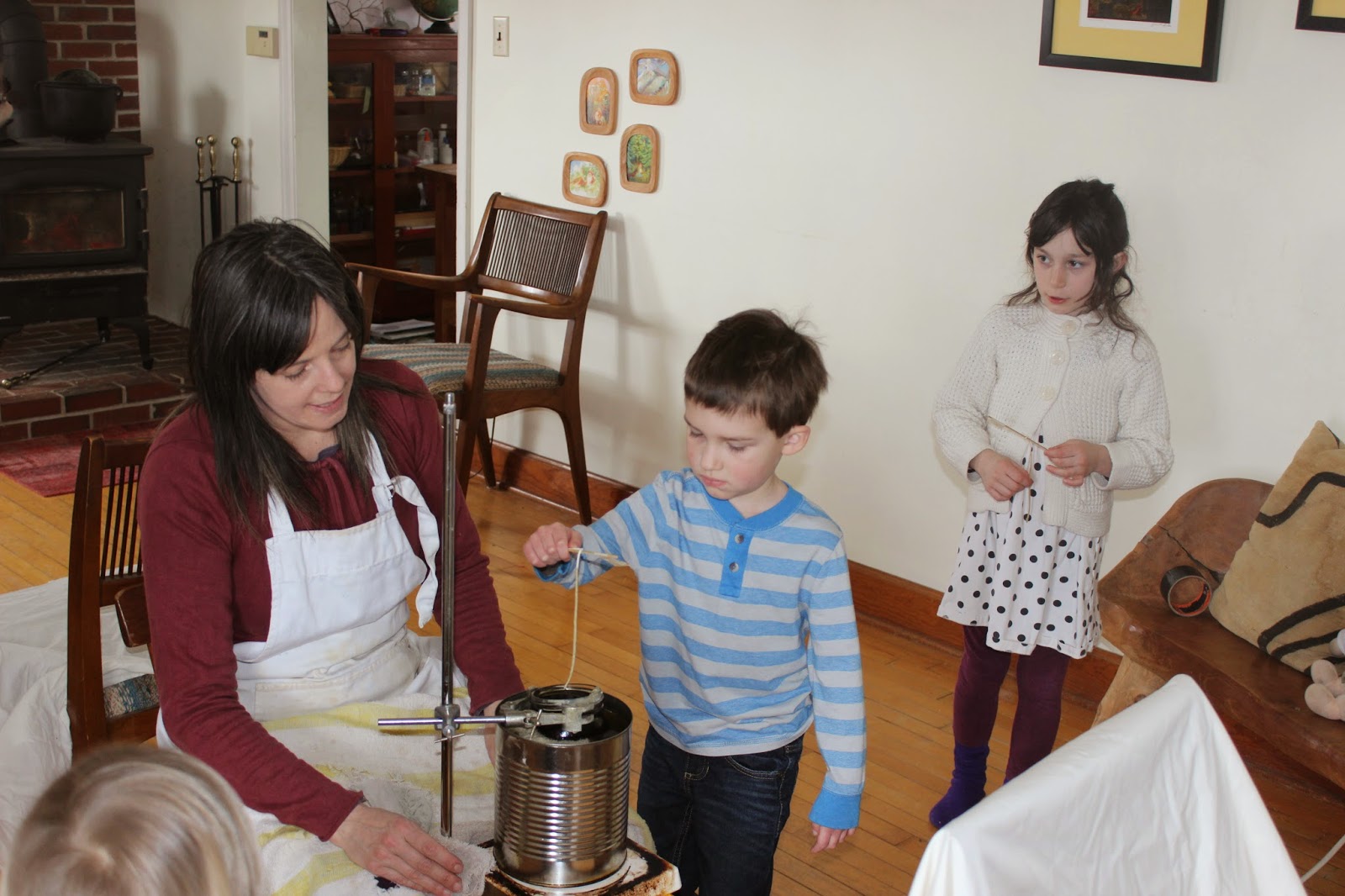 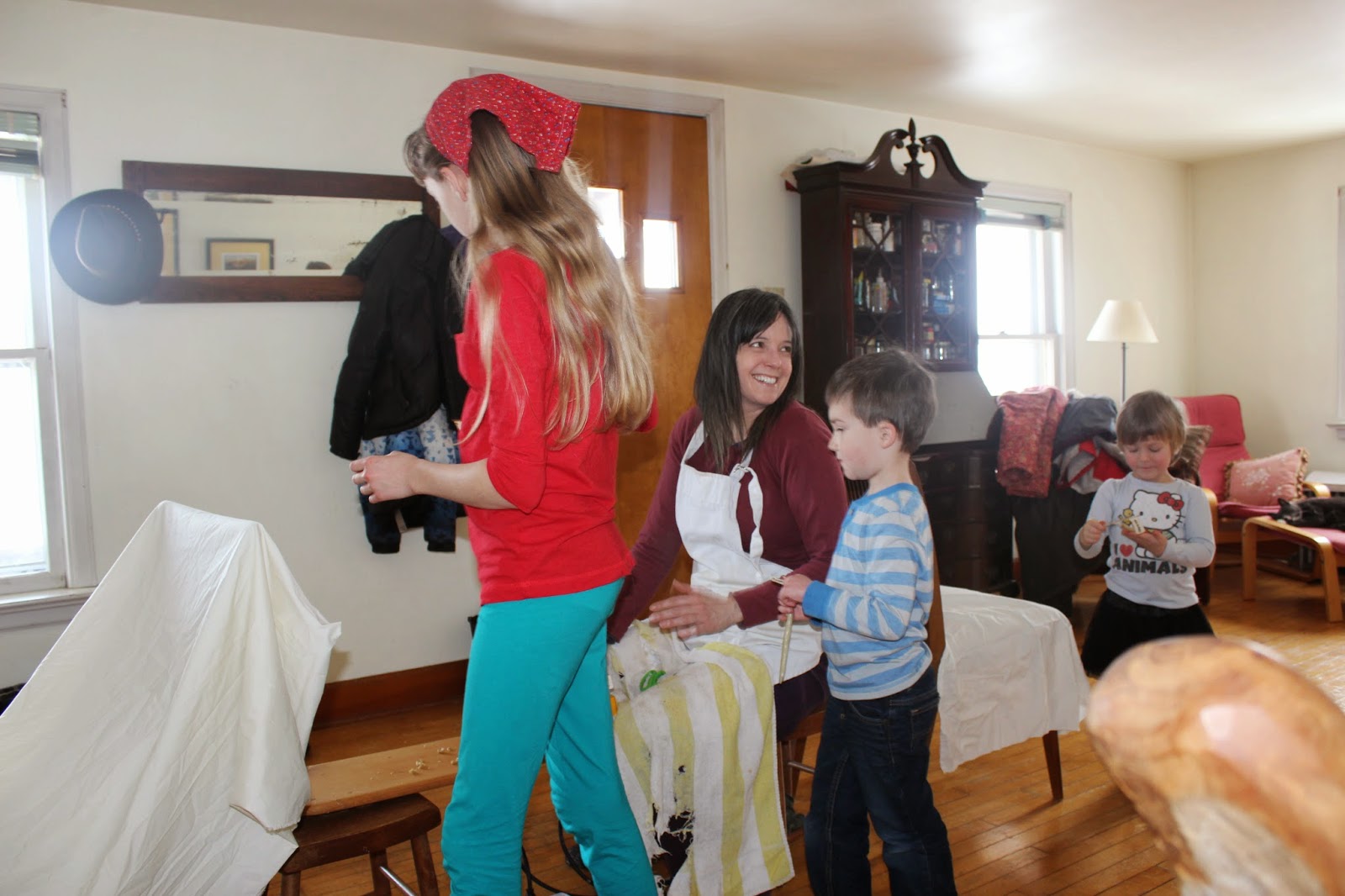 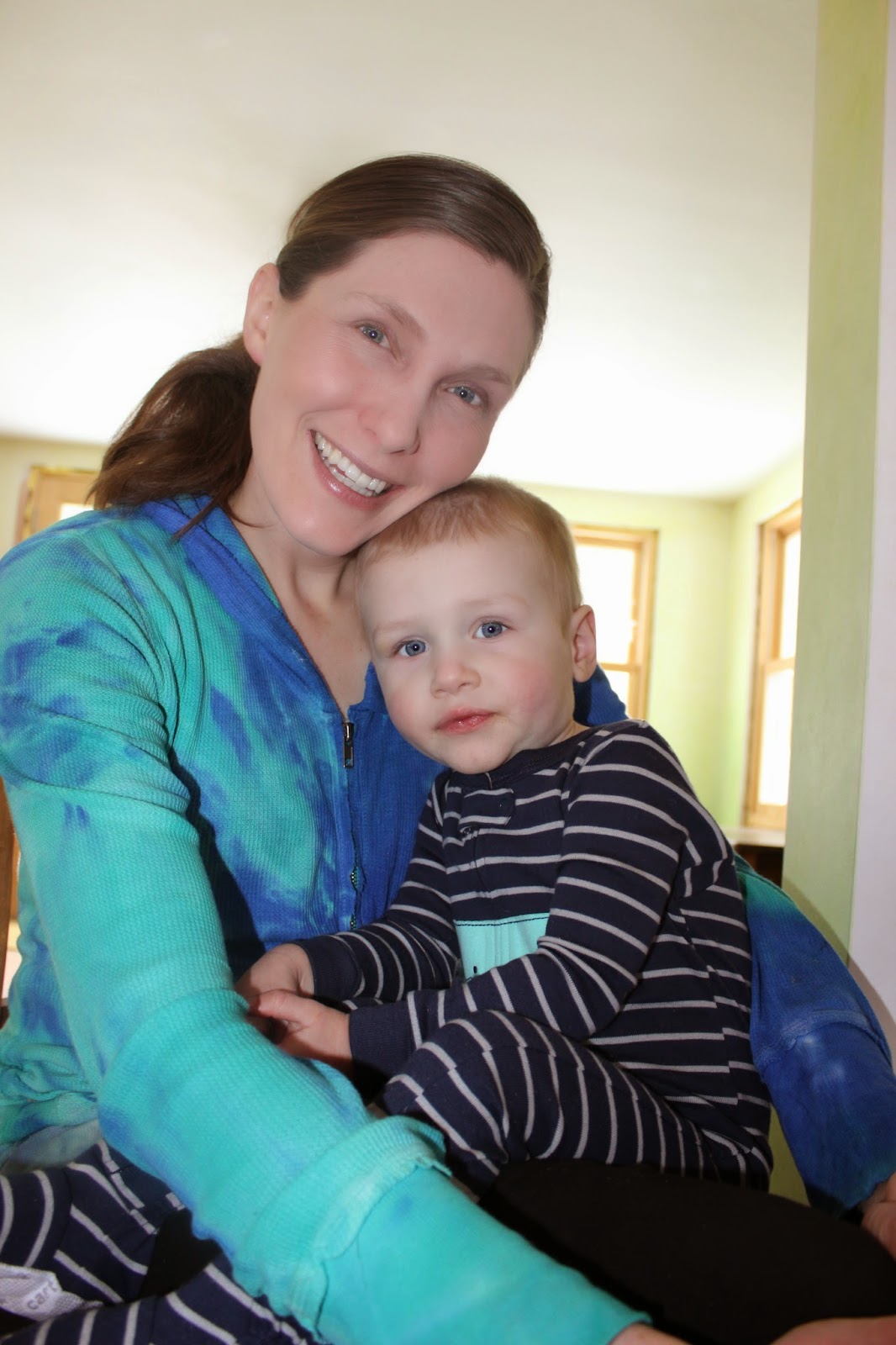 Aria, Zade and Ryzen love to tackle each other.  Usually it starts out with Aria tackling Zade and then Ryzen will try to climb aboard.  Ryzen loves his older siblings!  Whenever they are not around, he asks about them.  Whenever he sees something that he thinks is neat, he wants to tell them about it.  Yesterday in the car, he noticed the moon.  "Moon!"  he said, pointing out the window.  "Aria!  Aria!  Moon!"  "Yes," Aria responded.  "Zade! Zade! Moon!" 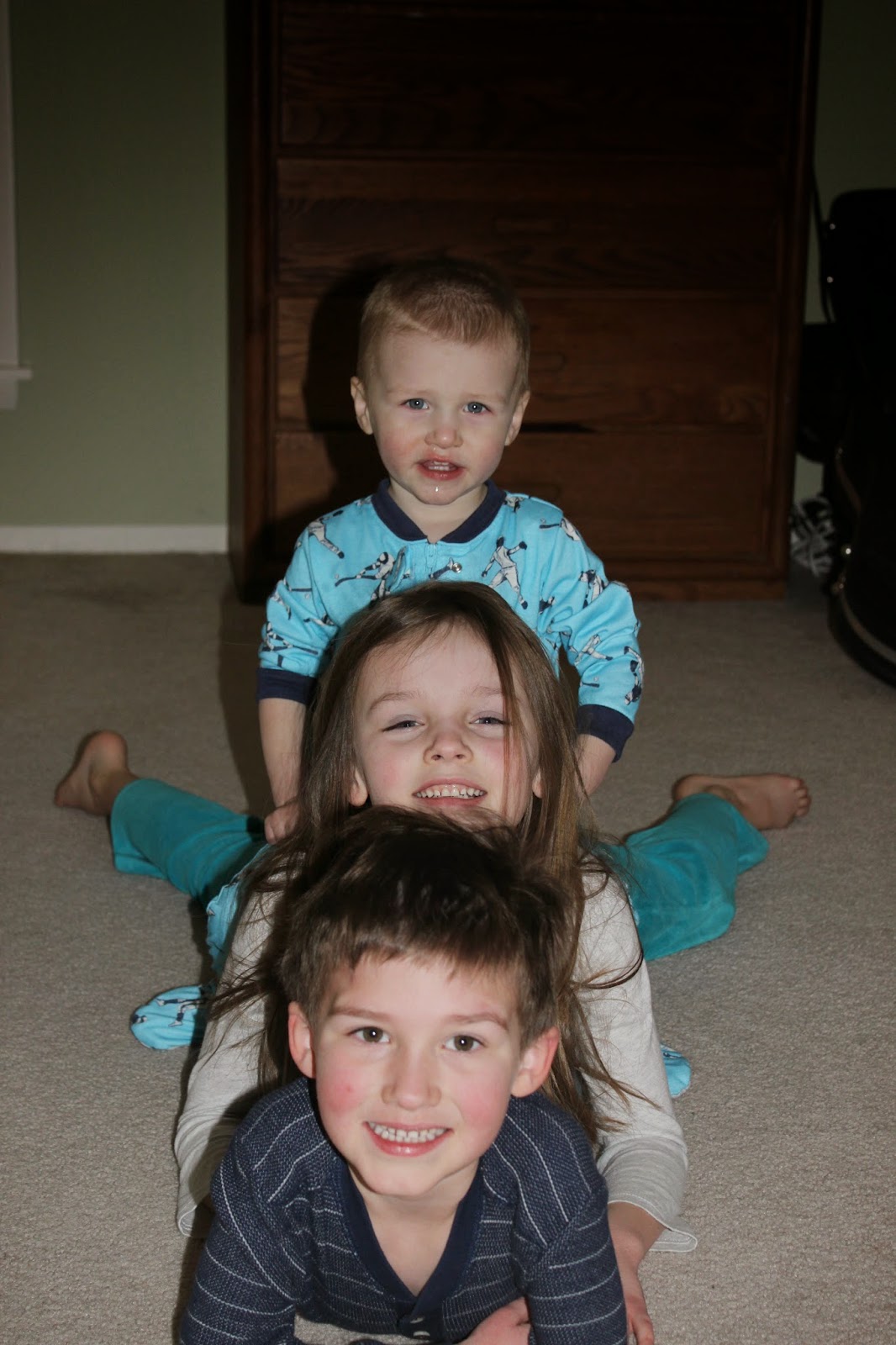 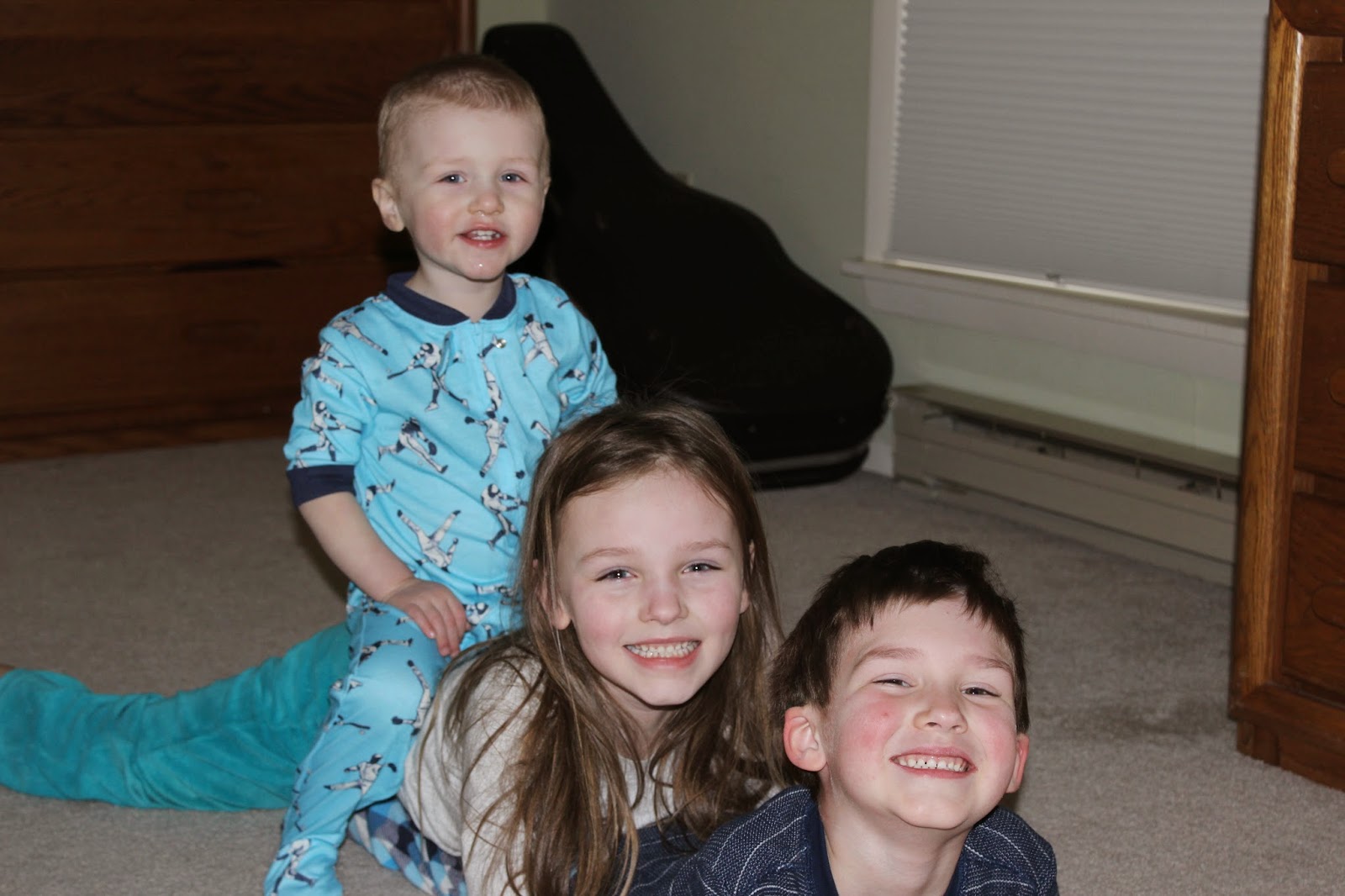 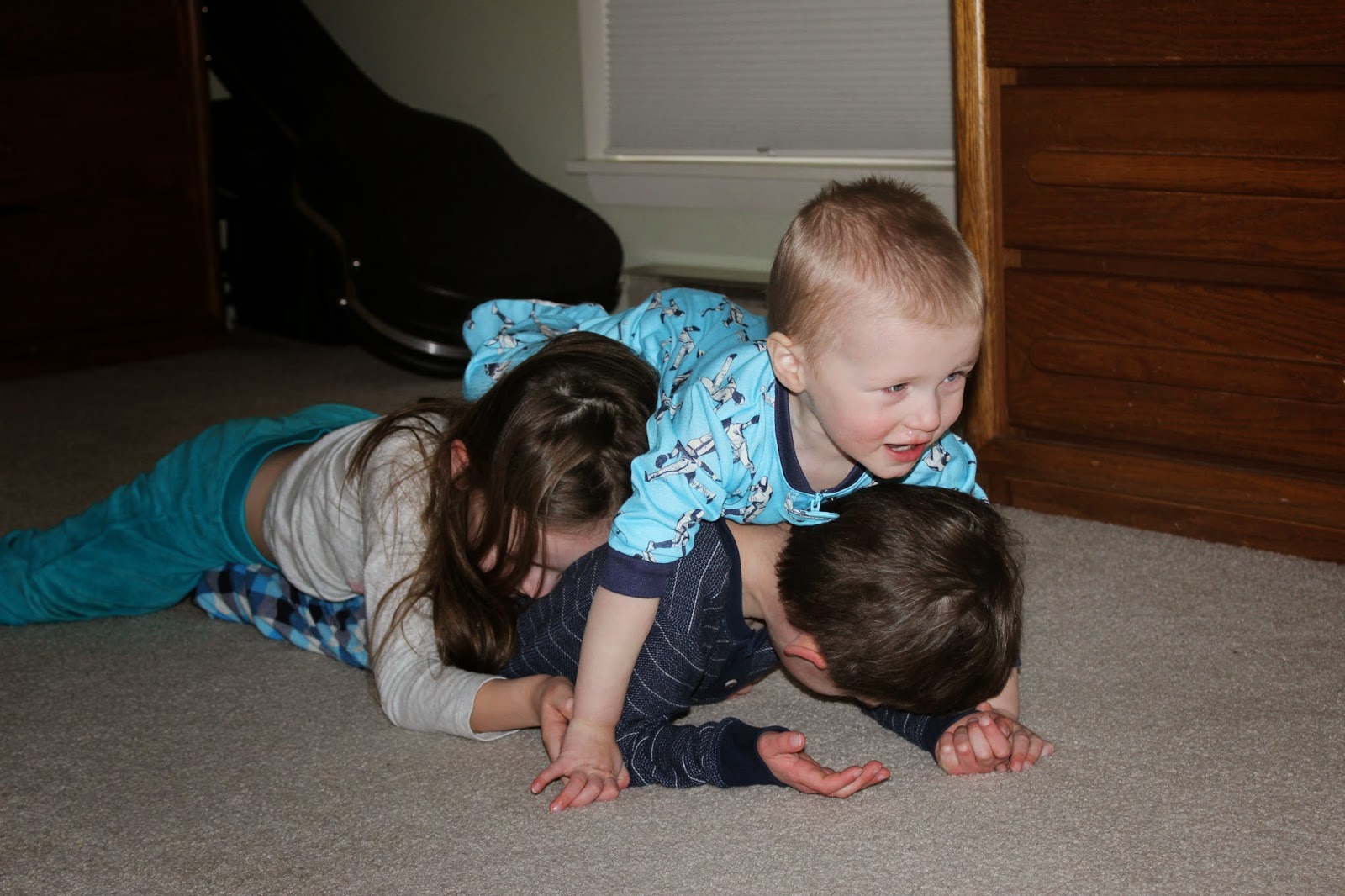 Unfortunately, a pipe in our basement ceiling froze and then broke.  It was such a small pipe, yet it sure caused a lot of damage!  Luckily Dane heard what sounded like a shower on in the basement.  I had already gone to church for ward council.  He called three times during ward council, so I knew something bad must have happened.  We had a couple of inches of water on the basement floor. Some of the walls had to be torn out and the insulation thrown away.  We still need to repair the walls. 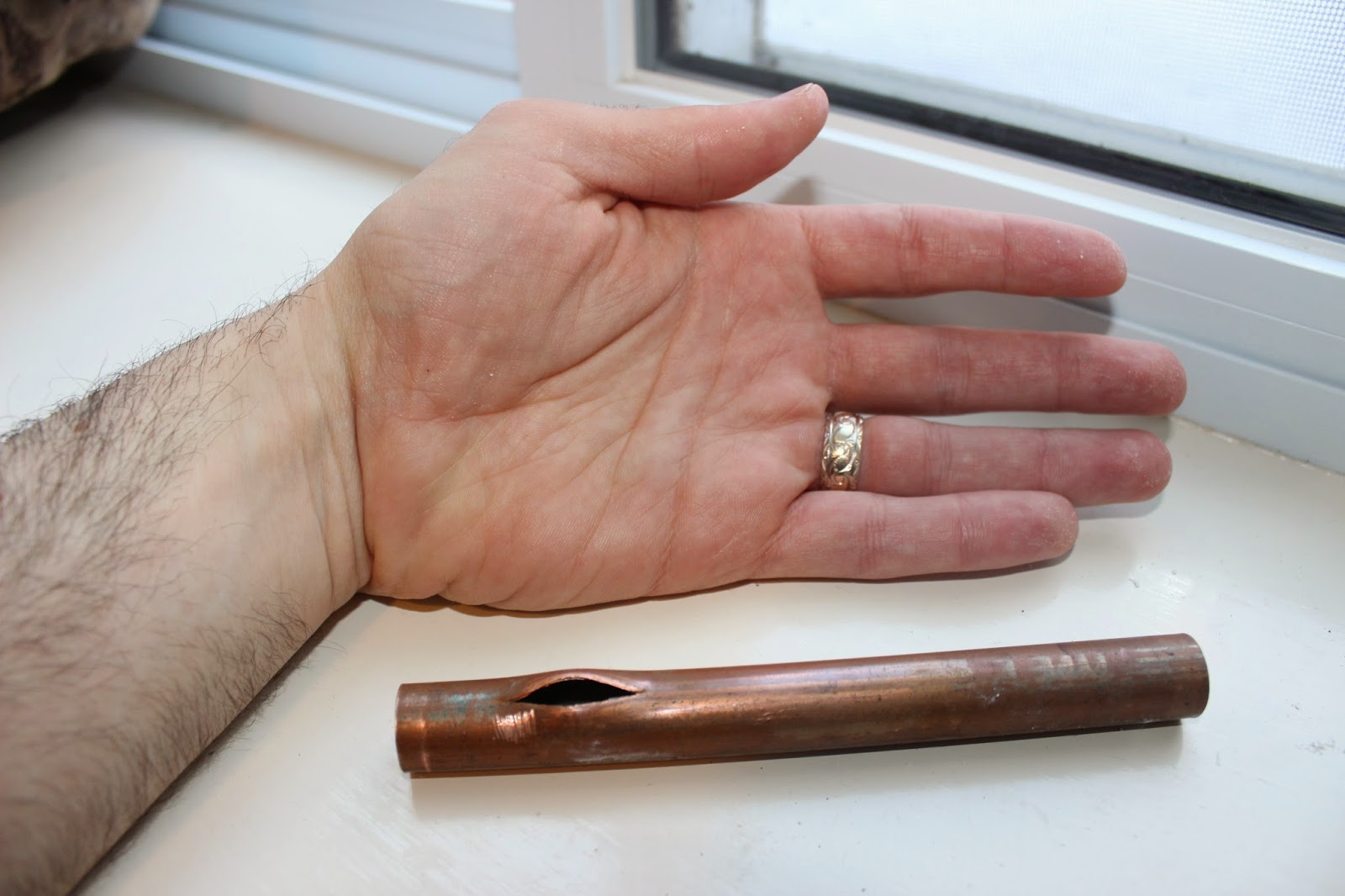 Thursday I called Dane at work and told him that I had to get out and go see something new!  The snow and cold has been repressive and it just seems to keep coming and coming!  We decided to head to Philadelphia for the weekend.   The Franklin Institute had a special exhibit called, "The Art of the Brick."  It is art created entirely out of legos!  I knew that Zade and Aria would find this fascinating. The exhibit actually exceeded my expectations.  The artist was incredibly creative and I loved his descriptions of what inspired him to create his work.  After the exhibit we also saw an Imax film on "The Great White Shark"  another top item of fascination for Zade.  He loves to talk about Great White Sharks.  I really need to take him to the library and get him more books about sharks because he can't stop taking about them.  After spending the day at the Franklin Institute we went back to the hotel and went swimming, and Aria showed-off her amazing swimming skills to her daddy.  It was a fun weekend get-away. 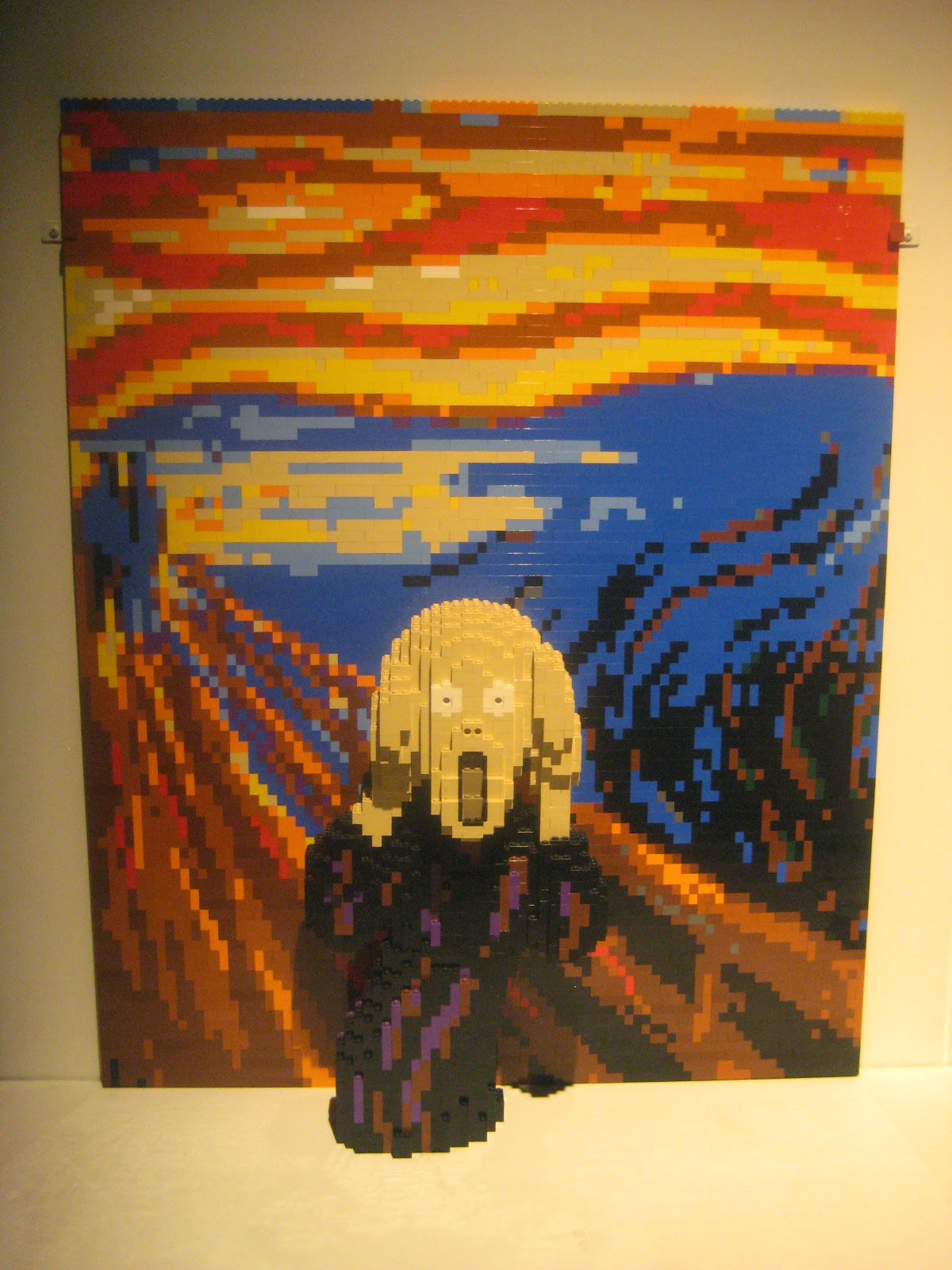 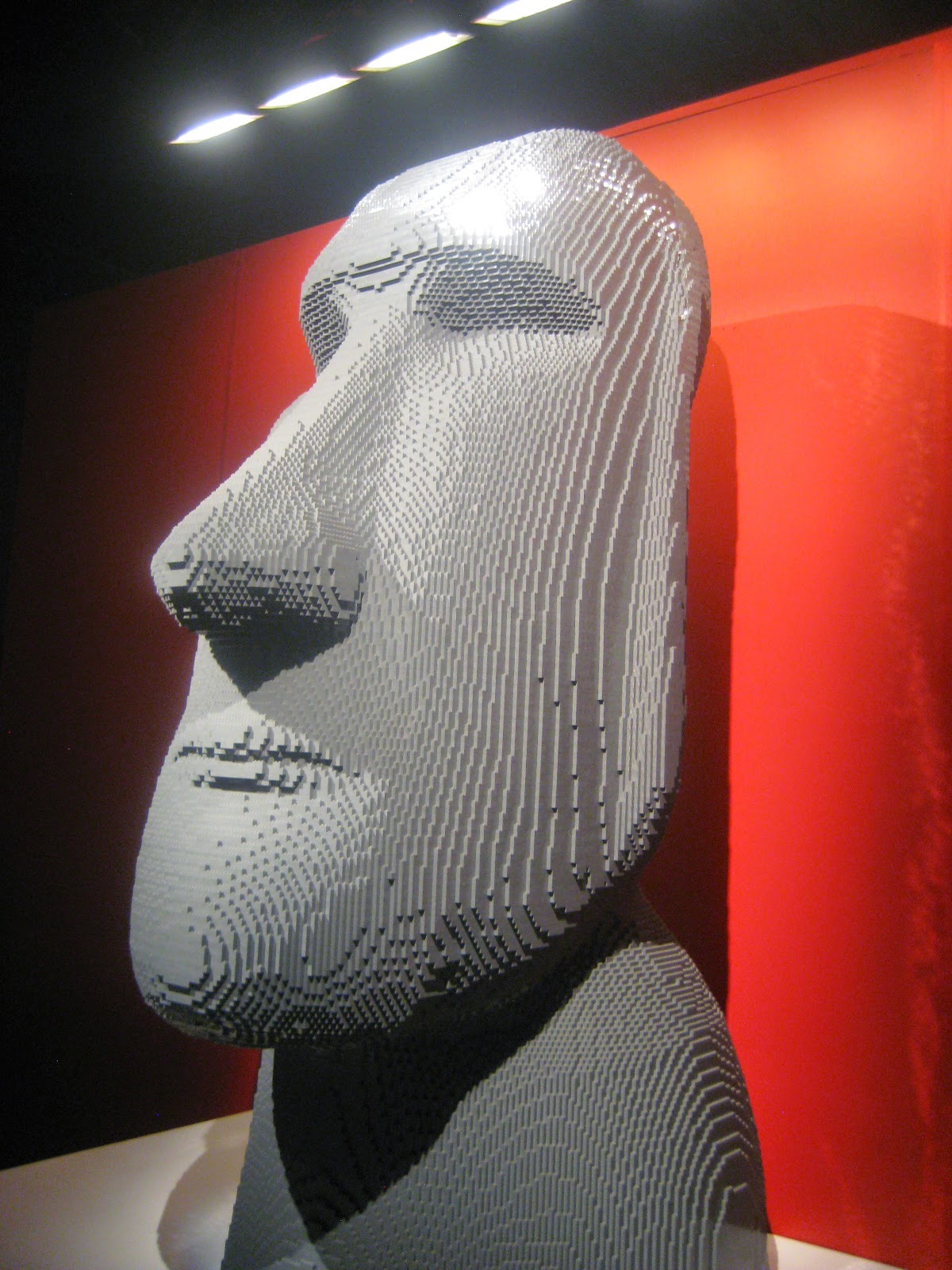 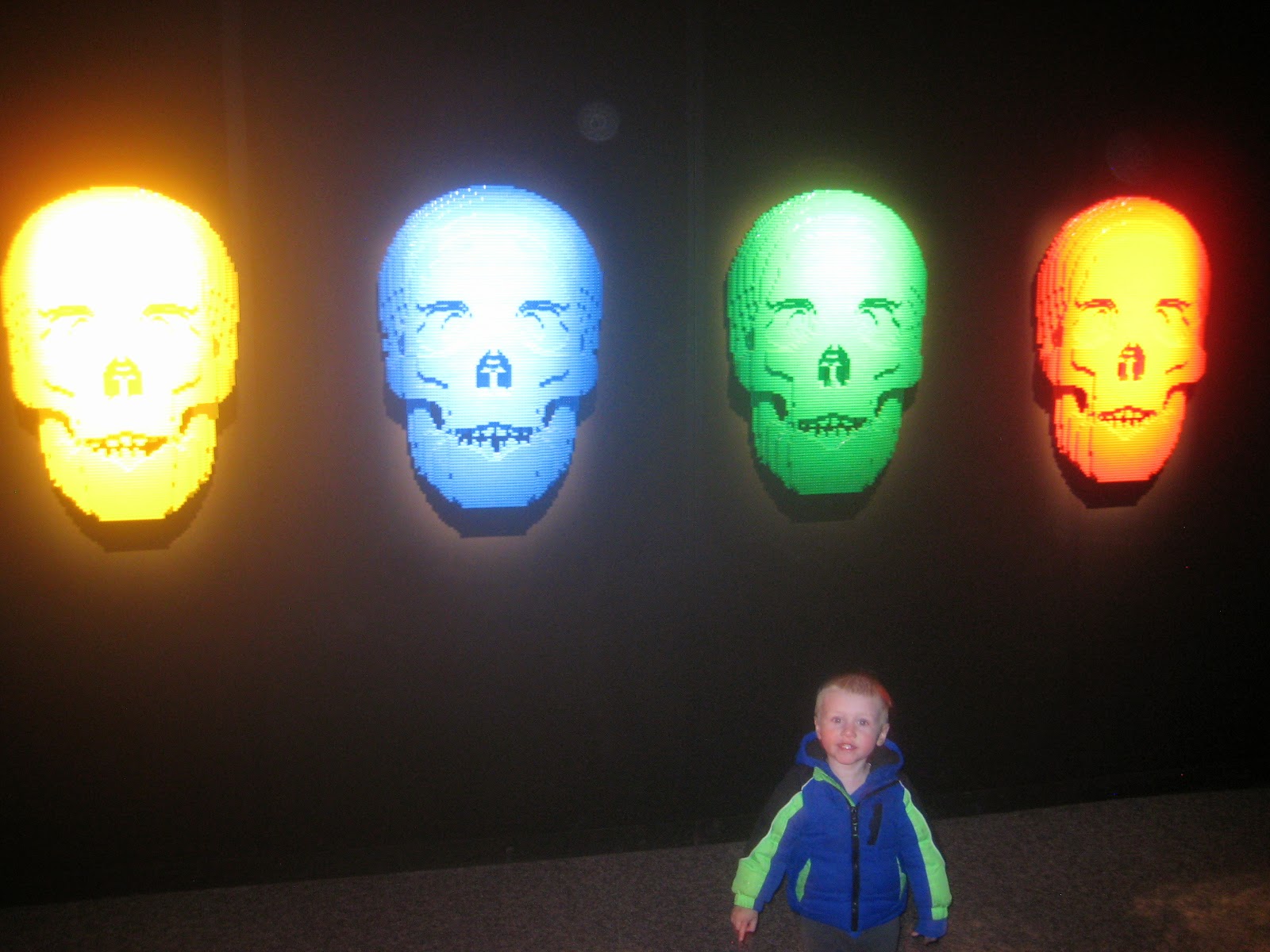 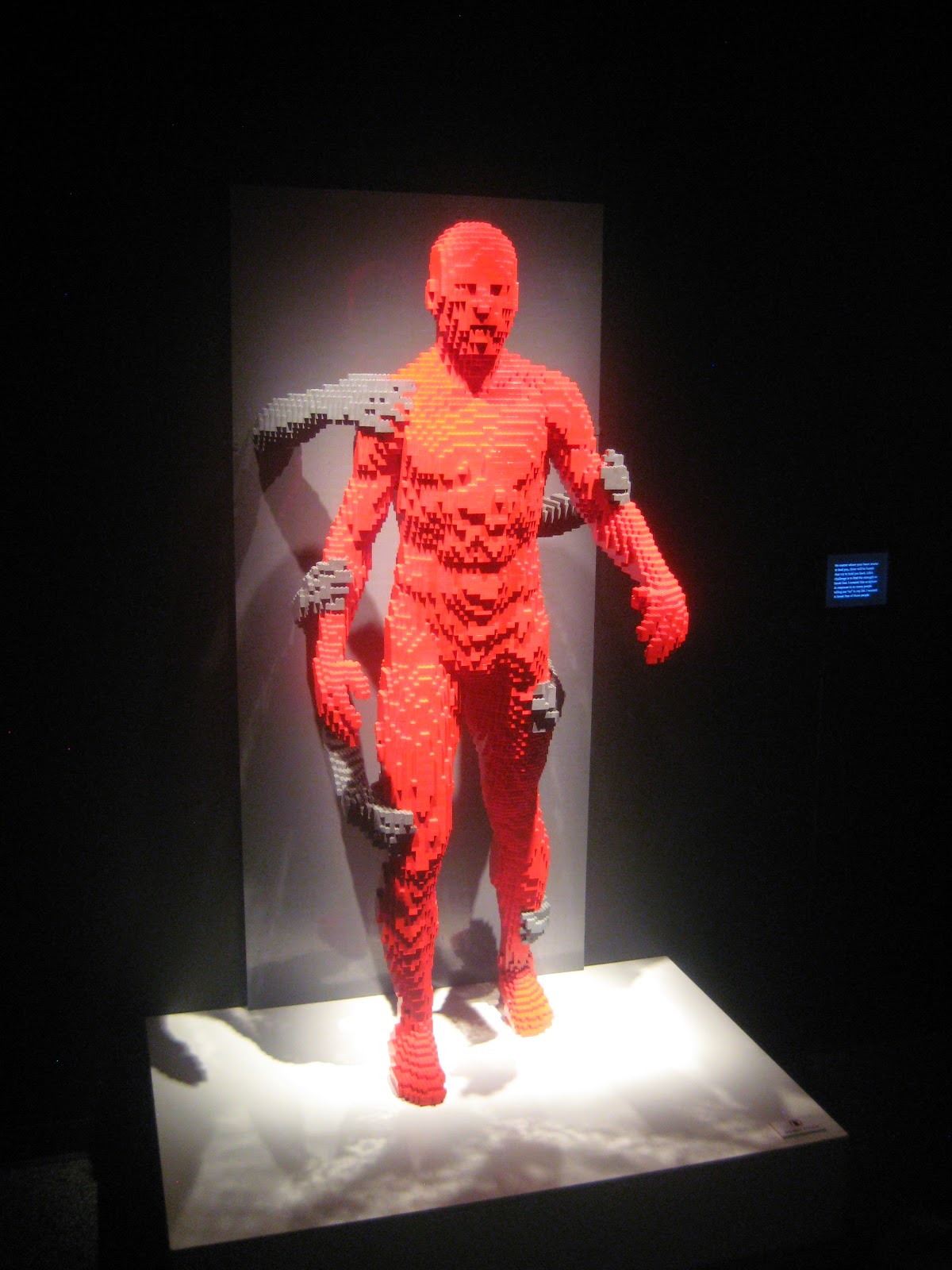 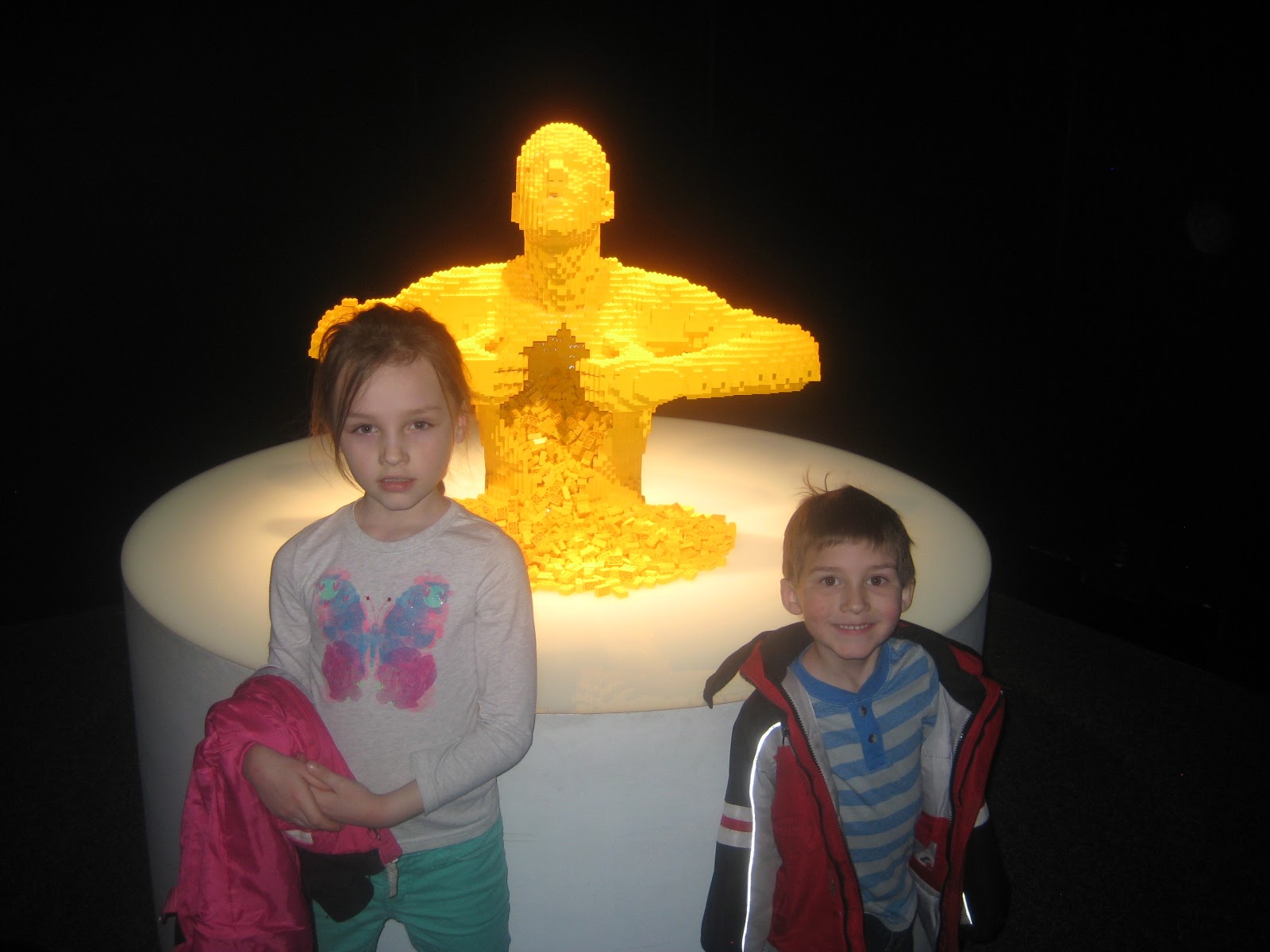 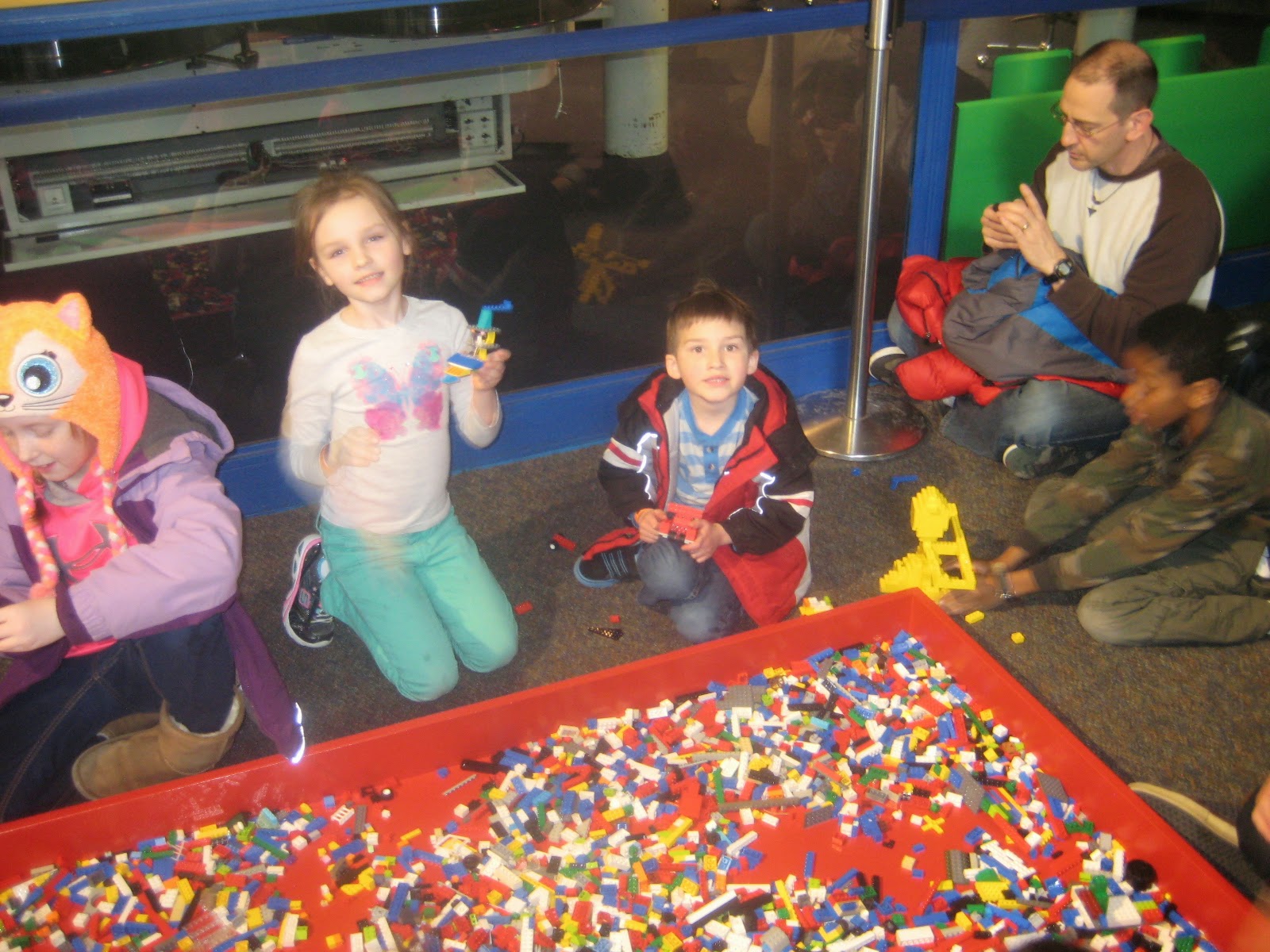